In this post I'm going to look at two of Judge Dredd's allies who accompanied him in his epic mission in The Cursed Earth Saga - Tweak and Spikes Harvey Rotten. This story appeared long ago in Progs 61 to 85 and saw Judge Dredd leading a small group of Judges on an arduous journey across the Cursed Earth, transporting the vaccine for the deadly 2T-FRU-T virus that was devastating Mega City Two. 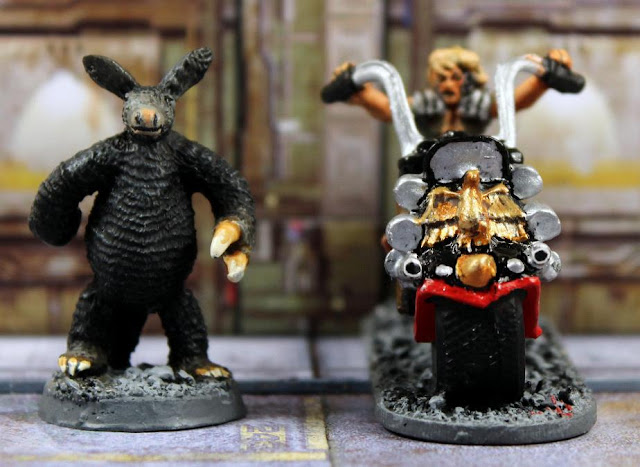 After humans arrived on his home planet, Tweak arranged for his people to go into hiding underground until he could gather more information about them. After utilising the power of mind probes he was able to determine that human history was littered with violence, exploitation and hatred - so, as President of his world, he decided that no contact should be made with the humans at all. After his children were captured, Tweak decided to let himself be captured and posed as a "dumb alien" rather than risk the humans exploiting the vast mineral resources of his planet - which Tweak's people ate - and leaving Tweak's race to starve. Convincing the humans he was unintelligent, Tweak and his family were sold into slavery in the Cursed Earth, although he was separated from them. After escaping and finding his family dead Tweak was recaptured but escaped again, thus the Slay-Riders were employed to kill him. Judge Dredd stepped in to save the alien, upon which Tweak helped him to deliver the 2T-FRU-T virus antidote to Mega City Two. After the mission, Dredd arranged for Tweak to be returned to his home planet. Dredd insisted the planet was of no value, and Tweak's people were left in peace.

This resin cast figure of Tweak was sculpted by Dave Stone of Wargames Terrain Workshop. He very kindly sent me one as a Christmas present last year. He also gifted copies to Andy/Da Gobbo and Simon/Blaxkleric. These figures are not available for sale so I felt very honoured and privileged to receive mine. Dave, Andy, Simon and I have decided to have a small painting contest, just for fun, to paint our Tweak figures. More on this later. Not surprising, there are no stats for Tweak in JDMG but I came up with these stats for him. Type: Level:3 Alien Infantry Hero. Stats - Psi:7, Move 5", Agility +0, Shoot -1, Melee +2, Melee Dice 3D, Will +1, Armour +0, Hits 4. Weapon - Crushing Claws with Damage 2 and AP-2. Talents - Concentrated Mind, Mind Shield, Skilled and Deadly and Stealthy. If hired as a mercenary, Tweak costs 155 Credits. 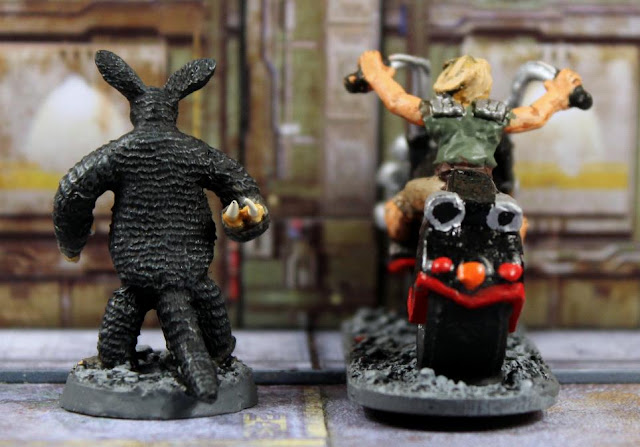 Spikes Harvey Rotten was a biker and a criminal. Dredd had him paroled from custody to accompany him on his perilous mission across the Cursed Earth desert, as he was familiar with the territory from his days smuggling guns there. When all of the Judges who accompanied Dredd were killed along the way, Spikes still fought by Dredd's side. He was killed only a short distance from Mega City Two.

The figure of Spikes riding a Lawmaster Bike was produced by Warlord Games for JDMG. Classed as a mercenary, he may be used by either the Justice Department or a street gang. If used by a street gang, he rides an Otomo K-9000 Street Bike instead of the Lawmaster and his Credit score drops by 50 Credits. He is a Level:3 Punk Infantry Hero armed with a Stump Gun and possibly, a Hand Bomb, which he sometimes wears as an earring. His Talents are Brave, Drive-by Boot, Hunker Down and Luck of Grud. He costs 220 Credits if hired by the Justice Department or 170 Credits if hired by a street gang.
THE TWEAK OFF
It was Dave's suggestion to name this friendly painting contest the "Tweak Off". 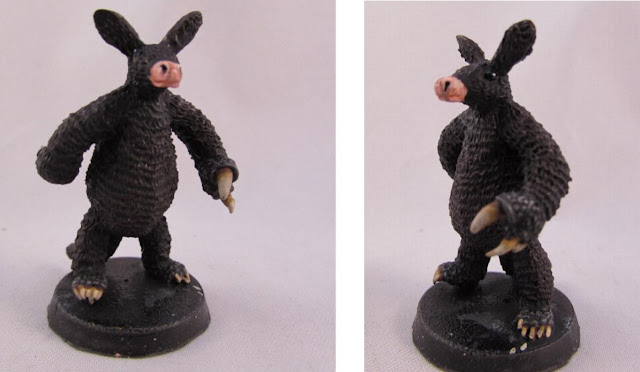 This is Dave's entry. Seeing as Dave does not have a blog I offered to showcase his entry on my blog for him. Dave has also gone for black fur but his snout is more pronounced than my version with a much sharper contrast between the flesh and the fur. I should point out that the figure is a one-piece casting with its integral base. Dave's version is the one most closest to my own. 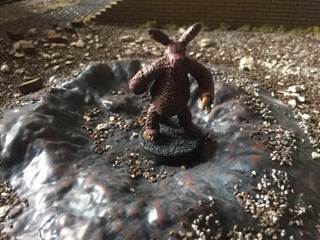 Here is Andy's entry. He has gone for a dark brown fur colour and his Tweak has a similar snout to Dave's Tweak figure. I have only included one photo of Tweak that Andy sent me. You can read a lot more about Andy's entry on his blog and see more photos here -
http://dagobbosgrotto.blogspot.co.uk/2017/01/tweak-off.html

This is just a work in progress view of Simon's version of Tweak. Like Andy, he has gone for the dark brown fur look. The snout, hands and feet are distinctly lighter (as they should be) but are in stark contrast to his body fur. I opted for a smoother transition on my figure. You can read more about Simon's entry on his blog here - http://fantorical.blogspot.co.uk/2017/01/tweak.html

It is interesting to see how all four of us have approached this task and come up with four different versions of the same figure. As I said, this contest was done purely for fun. There are no prizes to be awarded or votes required for whose version you think is the best. I enjoyed taking part and once again, I'd like to thank Dave for kindly sending me such a wonderful figure of a character I always liked and felt great sympathy for. You can't help but feel sympathy for Tweak when Dredd discovers what happened to Tweak's wife and children.
Posted by Vampifan at 09:24