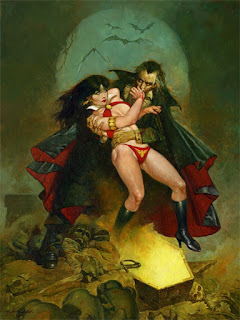 I start this month with this very dramatic painting of Vampirella fighting Count Dracula. As with all of my Vampirella pictures I'm showcasing this year, it was painted by Manuel Sanjulian. These two iconic vampires have been allies and adversaries on many occasions. In this painting they certainly seem at odds with one another.

August was very much Strontium Dog month for me and I was delighted that I got everything released by Warlord Games for the first wave of the game painted - figures, scenery and even the plastic tokens. I have already started painting the figures for the wave two releases and about half of them have been finished. I greatly enjoyed playing my introductory batrep for the game (see my previous two posts) and I hope to play more scenarios in the future. The way characters activate in a turn was new to me but greatly added to the enjoyment and unpredictability to the proceedings. As a few followers commented, the game ebbed and flowed throughout the turn. No IGOUGO in this game.

Sticking with 2000AD I have news of another major character from this, my second favourite comic (Vampirella is, of course,  my favourite comic) and that is Judge Dredd. 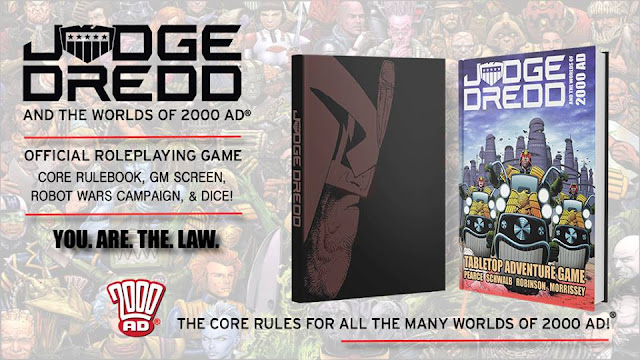 EN Publishing who produce the What's Old Is New series of role-playing games, N.E.W., N.O.W. and O.L.D. are going to release the Judge Dredd and the Worlds of 2000AD RPG rulebook (in two versions), the Robot Wars campaign supplement, a games-masters screen and special six-sided dice as part of a Kickstarter which launches on Tuesday 24th of September 2018. I am immensely excited about this whole project. If you'd like to know more about it please check out my WOIN blog where I have been given exclusive access to some of the contents of the book. Here's the link to it - https://vampifanwoin.blogspot.com/2018/09/judge-dredd-and-worlds-of-2000ad-preview.html

In addition to the new Strontium Dog figures currently getting painted, I'm also working on yet more Wild West figures by Black Scorpion and Knuckleduster Miniatures, Ghosts of Gaia figures by Bad Squiddo Games, as well as an assortment of sci-fi figures I plan on using in my The Ace of Spades Campaign. I am also painting scenery items from Wargames Terrain Workshop along with more Hayland Terrain scenery and furniture items that my brother has printed out for me. I have plenty to keep me going for years to come... and that's just the stuff I share with you. I also work on a number of projects no one but me knows about. They will be revealed when the time is right. Suffice to say, I am very busy.
Posted by Vampifan at 09:20