Deathwish is a GURPS Supers scenario book that features a heavy metal band called Deathwish, who are all super-villains. I played this scenario with Vampirella, Wolverine and Gothique as the heroes. You can check out this old post to see who the three heroes are - http://vampifansworldoftheundead.blogspot.com/2016/07/vampifans-superheroes-and-supervillains_8.html
This was one of the best scenarios I ran when I was playing my GURPS Supers campaign in the 1990's with my gaming buddies, Dave (Wolverine) and Rob (Gothique). They were triumphant in the scenario but the final battle was a tough one as I considerably beefed up the stats of Deathwish to make them more of a challenge against three very powerful superheroes.

At the far left is Sorceress, aka Morwena the lead singer of Deathwish. Her real name is Amanda Carazone. She is the daughter of a wealthy politician from New England. She spent her childhood in the lap of luxury - anything she wanted, she got. Amanda was 21 years old, attending a small girls' college, when her father skipped the country with his secretary and every dollar the family owned. For the first time in her life, Amanda found herself penniless. Wandering the streets,stunned and confused, she was taken in by the Black Moon Society. The leader of this group recognised the magical potential that lay just below her conscious. She spent the next year learning to use her powers, but eventually left the society. She wanted her good life back.
She travelled to Los Angeles and took a singing job in the nightclub of a ritzy hotel - it afforded her the perfect opportunity to meet wealthy men who could be set up and taken for every penny they had. It was at this hotel that she met Necrovore who recognised a good voice when he heard one. Much to her surprise, she found herself attracted to him and the two began working as a team. On his advice she changed her name to Morwena.
They linked up with a crazy young man, Bobby Anderson (aka Demolition Man) and law student Harry Johnson (aka Psytron). Bobby played bass guitar and Harry played drums. Together they formed the nucleus of the heavy metal rockers known as Deathwish. They auditioned for a lead guitarist and accepted a teenager called Arvyn Runeweaver. That was three years ago. They burst onto the music scene with the sizzling Wish upon a Star album. This was followed by the controversial but phenomenally popular Wishcraft album, which was banned in many stores because of its cover. Disaster struck when Arvyn Runeweaver tragically died of spontaneous combustion. He was replaced by Eddie Traynor (aka Whirlwind) who proved to be a more talented guitarist.
The group released their third album, Wishing Hell earlier this year and are planning on recording a live double album, Blow out the Napalm and Make a Wish. Their fans, predominantly young (under 25) have a well earned reputation for causing violence and mayhem. The official Deathwish fan club has over 100,000 members known as "Death-heads" who are obsessed with the band's music. Deathwish themselves recently used their superpowers in the pursuit of crime, particularly museum robberies. For the past year they have successfully raided nearly a dozen museums throughout the USA, amassing a small fortune in artefacts and treasures.
Morwena has been described as "sex incarnate" by Rolling Rock magazine. It went on to add, "Watching her move is more erotic than most porno movies. She does not just sing to the crowd - she makes love to it with her voice. She wrenches emotion out of every syllable she croons."
Her figure is a Grenadier superhero who was not converted. She was a perfect match for Sorceress. For my GURPS campaign I increased her points value from 500 to 900. her superpowers include Control Weather, Insubstantiality, Magical Aptitude level:3, Shockwave level:10 and Surge level:5.

Next in line is Eddie Traynor the lead guitarist of Deathwish and a supervillain known as Whirlwind. He is a native Californian - he surfed, skated, grew his hair waist-length, bleached it blond and did everything a "typical" California boy should do. His consuming passion since he was seven years old has been his guitar. He practised for at least two hours every day, rain or shine, until he could make the instrument do anything he wanted. When puberty hit, Eddie found he had several other talents - flight, for instance, and the ability to control winds. At first he only used this power to provide good windsurfing weather - but when he found he could turn invisible the temptation to do some crimes became overwhelming. About this time Eddie got the chance to try out for Deathwish. Much to his surprise, but not to anyone who heard him play, he got the job. As far as Eddie is concerned, he has died and gone to heaven. Not only is he playing with one of the hottest bands in the world, but he is working with an accomplished group of meta-villains that can teach him the ropes on how to most effectively use his abilities.
His figure is also an old Grenadier superhero. I re-sculpted his hair and added his long ponytail out of Milliput. I increased his GURPS points value of 650 points to 750 points. His superpowers include Control Winds level:5, Damage Resistance +20, Flight, Invisibility (Switchable), Invisibility to Machines, Super Flight, Whirlwind level:16, Wind Blast level:10 and Wind Jet level:10.

In the centre of the pictures is Harry Johnson aka Psytron. Harry knew he was cut out for a career in law and diplomacy from an early age. When he turned 13 he gained the ability to sense what others were thinking. He also had another passion in life - the drums. These two forces held him in a mental tug of war throughout his teenage years, resulting in an internal compromise when the time came to choose a good college. He could go to a good school, but it would be a good school near Los Angeles, the musical Mecca. So Harry ended up at U-Cal Berkeley, studying by day and drumming by night. He had never considered adding crime to his list of hobbies until he met Demolition Man. Something about Bobby's hedonistic passion for life rubbed off on Harry. He began using drugs and collaborating with Bobby on jobs. Finally they met up with Morwena and Frank, and a partnership was formed. Harry (who adopted the name H.I. Jynx at Frank's behest) had developed a serious cocaine problem at this point, and had also become convinced that he didn't have to fool with the existing political structure. With the help of his team-mates he could take over the world!
The figure of Psytron is yet another old Grenadier superhero. I added his Uzi sub-machine gun to him. He cost 500 points and his superpowers included Telepathy level:10 and Teleportation level:22

Next up is Frank Birmingham aka Necrovore, the band's keyboard player and only non-superpowered member. Frank had always been the best at anything he tried. He was smarter, stronger, faster and quicker than any of his friends at high school, and he excelled in sports in college, where he lettered in track, baseball and basketball. Instead of a career as a professional athlete, however, he was drawn to music. He loved the creativity involved in starting with a blank piece of paper and a melody in his head ending up with a song or sonata. Although he worked extensively with various symphonic groups, his true love was rock and roll. After graduation, Frank headed for the best recruiting spot in the world for musicians - Los Angeles. It was here that he met Amanda and convinced her that Morwena was a much more commercial name. The pair met Harry and Bobby shortly thereafter and the nucleus of Deathwish was formed. Frank is slightly uncomfortable as the only non-super in the group, but makes up for it by being the organiser and planner. He is still more interested in being in a good band than in committing crimes, but is willing to go along with it if it keeps everyone else happy.
The figure of Necrovore comes from the Citadel Golden Heroes range of superheroes. I added his Uzi from my spare parts box. Despite being a non-super, he still cost 500 points, which is very high for a "normal" GURPS character.

Finally, is Bobby Anderson, bass guitarist of Deathwish and supervillain known as Demolition Man. Bobby grew up on a farm in rural Kansas. He would have undoubtedly ended up working at the local cement plant, just like all his friends, except for a life-changing incident when he was 16. His mother got sick and he was sent to Los Angeles to stay with his aunt whilst his father cared for his mom. L.A. opened his eyes to a whole new world - he returned home six months later with an earring, a skateboard, a bass guitar and an attitude problem. Upon his 17th birthday he left home and wandered around for several weeks before stumbling across a commune called Avalon. It was run by the infamous Society for Creative Anarchy. Armed with a confused notion of what anarchy meant (he was expecting wild parties, uninhibited sex and no work) he joined. He began to notice some strange goings-on in the commune. Visitors, some obviously superhuman, were flying in and out, and there seemed to be a lot of action centred around the storage building in particular. One night he slipped the lock to the building and began exploring. A huge grin appeared on is face - he had found some sort of weapons locker. The walls were line with suits of armour ranging from medieval plate mail to high-tech battle armour. But one suit in particular caught his attention - it was silver and red and had a huge morning star attached to it. He tried it on and found that a small display inside had a menu explaining the suit's various powers. Demolition Man was born. He left that night and headed back to Los Angeles where he began playing with different bands and robbing banks. He met Psytron in a bar - the drummer was intrigued by someone whose mind he couldn't penetrate. The two of them became friends and then partners in crime before linking up with Sorceress and Necrovore to form Deathwish.
I couldn't find a suitable figure to use as Demolition Man and so I sculpted him myself. His morning star came from my spare parts box. He calls it Dorothy! I increased his points value from 750 to 800. His superpowers all come from his battlesuit which grants him Damage Resistance +30, Dark Vision, Enhanced Strength 120, Insubstantiality, Invisibility, Invisibility to Machines, Move through Earth and Penetrating Vision. The morning star could do a whopping 16 dice of damage!
I had wanted to highlight this group when I was doing my posts about my own superhero and supervillain figures but I couldn't find the figures. Then quite by accident last month, I found them in a box that I never thought they'd be in. It was a lucky find. I rebased them and photographed them so that I could type in this post. 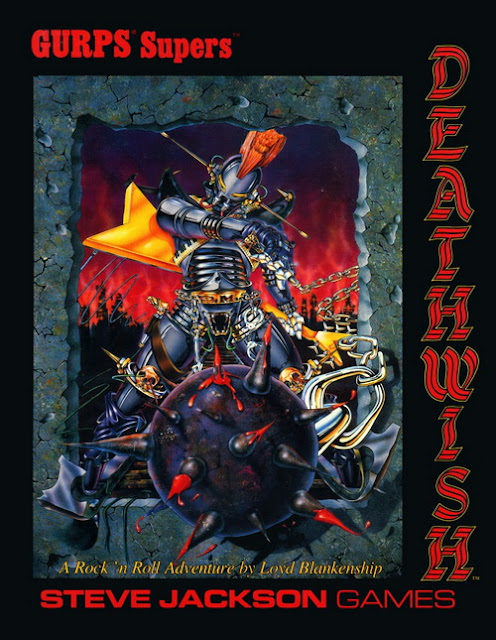