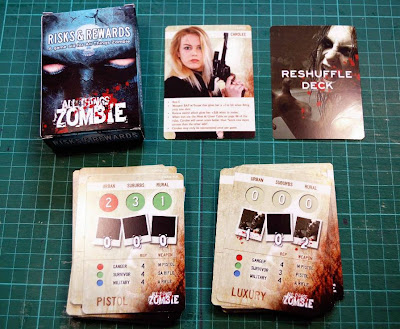 This is my second review of a game aid for All Things Zombie, the first being the Litko plastic tokens. I'll let Ed of Two Hour Wargames explain what this is all about before I go into further detail:
"What's in that building? Is it empty? Zombies? Survivors? What's their Rep? Did I find anything?
With Risks and Rewards we've done all the work for you. Draw a card and you'll know instantly all there is to know about what's lurking inside that darkened building.
Risks and Rewards is a 54 card deck that gives you a wide variety of information. It tells you if you've met zombies or survivors, how many of each, what they're armed with and all based on the type of area you're exploring.
All on one card
All that plus new weapons and loot not found in ATZ - Better Dead Than Zed. And did we mention the special Carolee (THW girl) NPC?
Risks and rewards: Save your dice rolling for when you need it!"
Searching buildings for loot is such an integral and important part of ATZ. Whenever one of your PC/NPCs enters a building you are never sure if it will be empty or occupied by humans or zombies. If there is opposition and you defeat them you can then search for loot and hopefully it will be something worth having. Often you'll find nothing. All of this is resolved by rolling on the appropriate tables in the ATZ rulebook. Now the need to roll dice has been negated and the cards tell you everything you need to know.
The three circles at the top of the card tell you how many humans will appear in a building depending upon its location - urban, suburban or rural. The type of human is colour coded - red for Gangers, blue for Military and green for Survivors. So the card in the bottom left corner of the photo above shows 2 Gangers in an urban area, 3 Survivors in a suburban area and 1 Survivor in a rural area.
If there are no humans in a building then there will be zombies. The number of zombies that you'll encounter is shown in the three boxes below the circles. So, the card in the bottom right of the photo shows 1 zombie in an urban area, 0 zombies in a suburban area and 2 zombies in a rural area. Note, you can never meet zombies and humans in the same place.
Going further down the card is info telling you the Rep and Weapon used by the first human of the group. If there is more than one human in the group you continue to draw a card from the unused pile to determine their Rep and Weapon. Anything else on these cards is ignored.
Finally, at the very bottom of the card is the type of loot you've found. Seven new items have been added and they are baseball bat, bow, crossbow, grenade, machete, SAW (Squad Automatic Weapon) and scope. All are worthy additions to the game and I applaud their inclusion. One item from the rulebook that doesn't appear on any of the cards is The Cure. Seeing as it could only be found at a hospital or military base in an urban area if you rolled rolled a 12 on 2d6, I don't mourn its omission. Searching for The Cure should be handled as a special case. Plus, some GMs may decide it simply does not exist.
There are two special cards in the deck and they are the "Reshuffle Deck" card (self-explanatory) and the Coralee card. You can see them both at the top of my photo. Coralee, aka the THW Girl, is an NPC who may join the hero's party. Obviously, if she does, then this card can't be used again, although I'd suggest using it to create a new NPC, like for example, Vampirella, he says wistfully! Full stats for Coralee appear in the rules provided with the cards and I can tell you, she'd be quite an asset to anyone's party. Even better, I just read on the TMP forum that a 28mm scale and a 15mm scale figure of Coralee is in the pipeline. Yeehaa! That'll save me from doing a conversion for her.
So, what's the verdict? Well, in my humble opinion, these are an essential purchase for any ATZ fan. I haven't had a chance to use them yet, despite playing ATZ very recently (batrep coming with my next post!). They certainly do cut down on the dice rolling and are an elegant solution. I particularly liked how they handle meeting multiple humans in a building. A very simple but clever solution.
I noted with amusement and appreciation that LTL Dad used them in his latest Nuts! batrep, although to be fair, he did spice things up by including zombies in the game! He commented on his blog just how useful they were, so if you want a second opinion on them, there you have it! I have no hesitation in highly recommending them to all ATZ gamers. The deck costs $15 and can be purchased from the THW website.
Posted by Vampifan at 14:44