As most of my viewers will know by now, I'm building a 28mm scale World Works Games Police Station. Up till now, the only police vehicle I'd built was a police van. I clearly needed police cars. There are an excellent set of police vehicles in the Mayhem Police Station set, including police cars aplenty. However, I ignored them all as I knew if I started making any of them I'd end up making loads. I will make them, but probably after I've made the police station. What I really wanted to make were a couple of kitbashes designed by Bob Cooper in his Emergency Vehicles set. This set also included the ambulance and Channel 5 News van, both of which have been reviewed in earlier posts.

The cars are based on the sports car template from the Bits of Mayhem set, (again, reviewed in an earlier post) which gives them a very low silhouette. These babies are built for speed!

One thing that I did change on them was the roofs. The way the cars are constructed, the roof is in two halves, which leaves an unsightly line across the centre, where they meet. I got round this by adding a spare roof section to each car from the Mayhem Police set, which comes with lots of different numbered roofs for your patrol cars. I had to trim them a bit to fit but once in place they look fine. In honour of being the first two police cars that I made I numbered them 01 and 02.

I absolutely adore these models and I'll tell you a story explaining why. The first time that I visited Florida (I've been three times in my life) I visited a gift shop in downtown Kissimmee, which is where I was staying. In there I saw a poster that I instantly fell in love with and and had no hesitation in buying. It depicted a quiet stretch of road in the outback. Two cars had parked on the side of the road. One was a bright yellow souped-up convertible with the roof down and with its owner leaning against the side of it looking thoroughly dejected. His girlfriend was still inside the car, glaring daggers at him. The reason for their massive downer was the other car and its owner. The car was a Lambourghini Countach painted as a police interceptor! The driver, about to give the owner of the convertible a speeding ticket, was a drop-dead gorgeous police woman wearing a miniskirt that was more like a belt than a skirt! The caption for the poster read "I Can't Drive 55," a reference to the speed limit sign that could be seen behind the Lambourghini. Oh, man, that car looked beautiful, and so did the cop! I still have the poster today and as soon as I saw these cars I was instantly reminded of it. Happy memories! 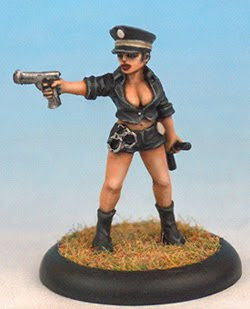 I've posted a picture here of Cop Girl from the Desolation Row range of 32mm scale Black Scorpion figures, as she is the figure that most closely resembles the cop in my poster. She is showing more cleavage than the poster cop and she is wearing a cap, but nevertheless, she'll do for me. I have this figure and she is painted but I was too lazy to photograph her just as an addendum to this post, so I've borrowed the picture of her from Black Scorpion's website. My paint scheme is a direct copy of what you see here. Only my base differs, as it's smaller and covered in rubble. Incidentally, you'll be seeing these two cars very shortly, as they'll be playing a starring role in my next ATZ scenario.


EDIT: I've just found a picture of my poster on the Amazon website. It's still available for sale! 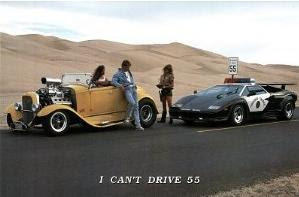