Continuing with my recent theme of showing you some of my old 28mm scale figures of superheroes and supervillains that I made and converted I present to you the Psi-Prime team of supervillains. These seven miscreants appeared in the Villains and Vigilantes scenario, The Secret in the Swamp, published by Fantasy Games Unlimited in 1986. I did not play this scenario with the V&V rules but I did convert it for GURPS Supers and ran it with two other players using our team of Gothique, Vampirella and Wolverine.

At the far left of the two photos above and below is Psi-Prime, the megalomaniacal leader of this group of supervillains. Born Karl Wagner in Munich, Germany, he developed an unhealthy fascination with genocide during his teens. He would often visit Dachau concentration camp. This coincided with the development of his psionic super powers. He majored in chemistry and discovered a chemical that could instantly evaporate water. His plans for genocide by contaminating the water supplies in Germany were thwarted and he fled to the Everglades in Florida. With a stockpile of chemicals he plans to evaporate all the oceans of the world. In GURPS Supers I gave him the following super powers - Dehydrate level:10, Increased Speed level:2, Psychokinesis level:26 (with Instantaneous enhancement) and Telepathy level:12. He wears High Tech Body armour. He cost 1,000 points. He always carries a bag of coins, which he can use as ammo for a telekinetic attack, propelling them as fast as a bullet. My figure of Psi-Prime was sculpted by me and made of Milliput. He is meant to be tall but I think I've made him a bit too tall.
Standing next to Psi-prime is his girlfriend, White Heron. Whilst studying anthropology at university, Karen Moran was given the opportunity to study a tribe of Seminole Indians in the Everglades, She was even more delighted when she was asked to take part in a secret ceremony of the Indians' gods. However, it was all a ruse by Shaman (see below) and Karen was transformed into White Heron, the totem creature of Shaman's tribe. Shaman was working for Psi-prime and when Karen met Karl for the first time they fell in love. She soon came to accept his vision of his master plan to change the world. Karen can transform into a white heron, as well as spouting wings and talons whilst remaining human. She has one unusual disadvantage and that is an addiction for eating raw frogs, which she must do on a daily basis. She was designed for an average 500 points. Her figure is based on an old Grenadier Miniatures Supers figure and was so perfect for her that I didn't need to convert her at all. Sometimes you get lucky and find the ideal figure for your needs.

Third in line is Antioch, known as Shaman. As an aspiring man since his youth, Antioch became frustrated with the continued maltreatment of the Indians by the Whites. He decided revenge was in order. With the aid of the Five Ancients, supernatural spirits he summoned, he forged two magical devices - an Amulet of Life and a Mind Control device. His actions brought him to the attention of Coot (see below) who was working for Psi-Prime. Coot urged Psi-Prime to recruit Shaman. The old man readily accepted Psi-Prime's offer and has never regretted it. Shaman possesses no super powers but he does know a smattering of magic spells. He has Magical Aptitude level:2 and Spirit Empathy as two of his GURPS advantages. He cost 300 points, making him the weakest member of the Psi-Prime team. Shaman is another one of my unique sculpts and was made out of Milliput.
At the far right is Coot, a being from a limbo-like dimension, who ruled there until he grew bored and sought out a new challenge. Psi-Prime made contact with him and offered him a portion of the Earth to rule and a decent portion of the water that would remain after he put his genocidal plan in place. Coot, hoping that this would be a true test of his power, agreed. Coot's super powers that I gave him for GURPS Supers were Enhanced Strength 23, Extra Hit Points +20, Gadget (a fishing rod with Bind power level:15), Increased Speed level:2, Laser Eyes and Longevity. He cost 1,000 points, making him a formidable opponent. He was made by me, using Milliput. His fishing rod was the shaft of a spear I converted. I like him because he looks so innocuous. 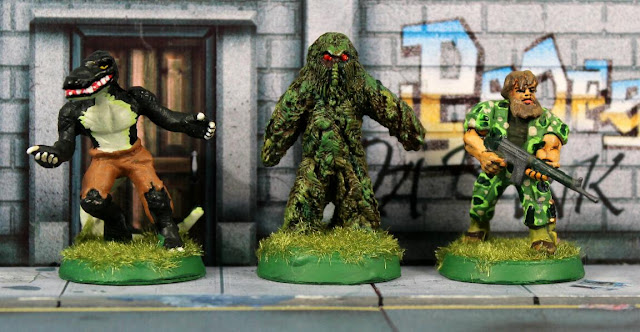 For this trio of villains I changed their bases to reflect the fact that they spend all of their time in the swamps of the Everglades and would never appear in an urban environment. At the far left is Alligator, a villain similar in many respects to the Lizard from Marvel Comics' Spiderman series. Roger Engle, was once a biologist studying alligators in the Florida Everglades. This was a dream job for him but he became appalled at the slaughter of so many alligators both legally and illegally that he decided to champion their freedom and dignity. He developed a formula to give him the powers of an alligator. It worked only too well but it also gave him the intelligence of an alligator. When Psi-Prime found him, he manipulated the confused scientist into aiding in his fiendish plan. Alligator has the following powers for GURPS Supers - Amphibious, Breath Holding level:4, Damage Resistance 20, Enhanced Strength 30, Increased Speed level:2, Passive Defence 3, Speak with Animals (reptiles only), Striker (claws, teeth and tail) and Super Swimming. He cost 750 points. I sculpted him out of Milliput. An easier option would have been to simply use a Heroclix figure of the Lizard but I didn't.
Next up is Sludge, one of the Five Ancients who responded to the summoning by Shaman. His form has changed and he is considerably weaker in this dimension. As one of the Ancients (who all desire the downfall of Man) "Sludge" saw that the powers that Psi-Prime had allied with might succeed so he risked entering this dimension. Due to a freak mystical backlash caused by such power entering this dimension, Sludge was transformed physically and mentally. Shaman's two magic items (the Amulet of Life and the Mind Control device) allow him to remain in this dimension. If either were to be destroyed he would return to his original home dimension totally intact as one of the Five Ancients. Despite being considerably weakened he is still a very powerful entity. He possesses the following super powers - Amphibious, Body of Mud, Damage Resistance 5, Doesn't Breathe, Drink, Eat or Sleep, Enhanced Strength 150, Extra Hit Points +35, Immortality and Passive Defence 2. Note that Body of Mud is a combination of the powers Body of Earth and Body of Water. Sludge can alter the state of his body at will - from a liquid mud form to a wet clay-like form. He cost 1,000 points. For the figure of Sludge I simply used an old Grenadier Shambling Mound from a boxed set of AD&D monsters. 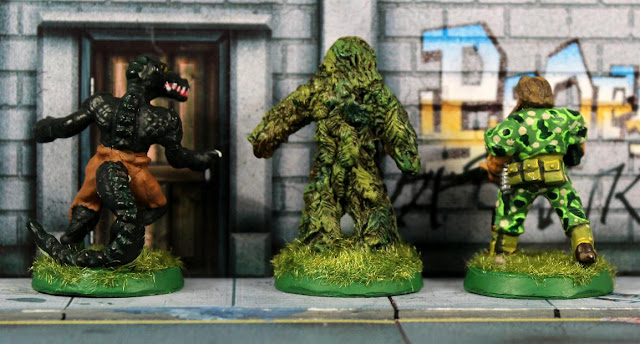 Last of all is Swamp Rat, who has no super powers whatsoever but who is a highly skilled and deadly survivalist. Jacob Archer is a U.S. Army veteran with mental problems. He thinks he is still at war and he went to ground in the Everglades where he adopted the name, Swamp Rat. He now believes the entire world is one vast swamp and if he were ever removed from this environment he would become catatonic. One day, he was approached by a man who he naturally shot. Incredibly, the bullet stopped inches from the man's heart. The stranger called himself Psi-Prime and offered Swamp Rat to help win his war if he helped him. This was too good an opportunity to pass up. Psi-Prime then put Swamp Rat in charge of Sludge, who "Rat" immediately liked (mainly because of his brutal killing strength) and within months had achieved near total control over Sludge. He cost 400 points in my GURPS Supers campaign. Swamp Rat is a converted Games Workshop plastic Catachan Jungle Fighter. I added the rolled up sleeves of his coat as his arms were originally bare. I also modelled his hair to match his illustration. His 7.62mm H&K G3 Assault Rifle came from my spare parts box.
The illustrations below were scanned in to my computer from the scenario book and in some cases modified by me. For example, Shaman was only shown from the waist up in the book, so I had to add his legs to the illustration. For Sludge, I added the long nose that appears on the figure so he more closely resembled it. They were all digitally coloured by me.