Shadows of Brimstone Hellbats and Stranglers

Here are two more of the monster types found in Flying Frog Production's Weird West game - Shadows of Brimstone. From the Swamps of Death boxed starter set are the Hellbats and from the City of the Ancients boxed starter set are the Stranglers (no connection to the pop group of the same name!). You get six figures of each type in their respective boxed sets and both types are multi-part sculpts.

Filling the skies overhead with clouds of black death, Hellbats descend in swarms to terrorise any who would dare travel the roads and countryside near Brimstone. With a long, swirling snake-like body and powerful demonic wings, Hellbats sweep through the air, lashing at their targets as they fly by. Emitting a nightmarish hissing wail, Hellbats are frightening creatures from the Void and can often be found in Other Worlds as well. More than virtually any other creature, Hellbats adapt easily to their local environment. This makes them an excellent vanguard for any wave of creatures flooding through an open portal.

These figures came with 30mm diameter bases and their wings and tongues were separate from their bodies. I have bent a few of the wings where they join the body to have them folding forward just to add a bit of variety. Plus it means they take up less space when bunched together on the game board. 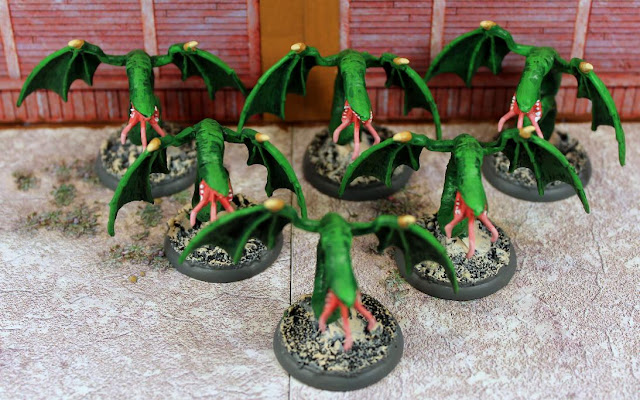 Here I show all six Hellbats together, flying in a V formation. They are a scary group to deal with and very fast.

Vicious, headless demons with an array of squirming tentacle arms and claws, Stranglers stand just short the height of a man. Often hunched over, they they use their arms as well as their legs to move, charging at their targets with demonic speed. Ensnaring a foe with its powerful tentacles allows a Strangler to draw them into its gaping maw. Ringed with sharp teeth, the massive mouth of the Strangler is inset into its torso, allowing the creature to bite down on entire arms and even the heads of its victims.

The Stranglers are smaller in height than an average 28mm figure if you measure them from the bottom of their feet to the top of their bodies. But their tentacles give them extra height. The tentacles and tails were separate from the body and legs. These come in two different sculpts. Because they are so small I stuck them on 25mm diameter MDF bases instead of the 30mm bases they came with. The Hellbats and the Stranglers are just two of the myriad range of creatures to emerge from the Void and are clearly not from this world. They are a threat but as you will see over the coming weeks there are monsters much bigger and far more deadly than these!
Posted by Vampifan at 09:38