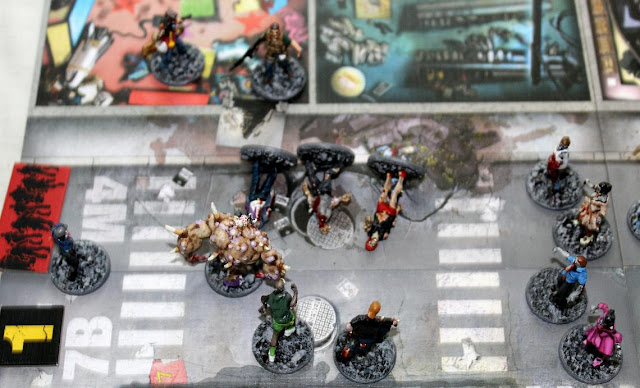 RAOUL. The freelance mercenary moved from the mall corridor into the toy shop and headed straight for the exit. One blow from his Fire Axe was all it needed to destroy the lock. An unexpected and nasty surprise awaited him outside - six Zombies, made up of a normal Walker, two Toxic Walkers, a normal Runner, a Toxic Runner and worst of all, a Toxic Abomination.
"This is not good!" he snarled as he opened fire with his AA-12 Automatic Shotgun. The burst of semi-automatic fire took out all three Walkers as their heads were reduced to bloody pulps. (These kills advanced Raoul to the yellow level and he gained the +1 Action Skill.) The Abomination shielded the two Runners with its huge over-sized body. Raoul fired a second burst at the Abomination and Stared in disbelief as they caused no harm whatsoever.
"Oh shit!" he exclaimed, "We are so screwed!"
(Obviously I knew his Automatic Shotgun would do no damage to the Abomination but Raoul didn't know that and had to find out the hard way. His Automatic Shotgun did 2 Wounds per shot but a weapon doing 3 or more Wounds was required to kill an Abomination.) 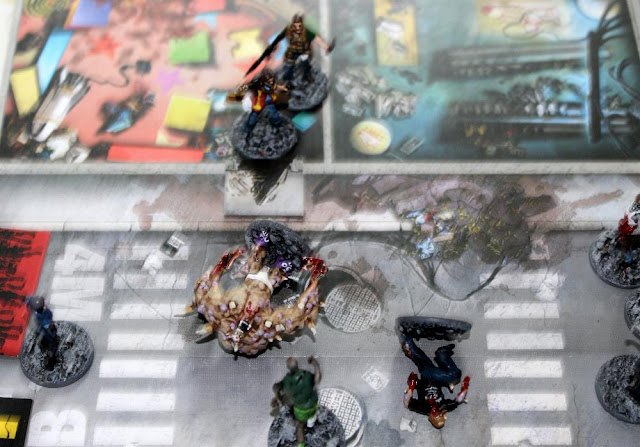 DEREK. "Let me have a go," the young locator suggested to Raoul. Working on the principle that all creatures were afraid of fire, he reckoned an incendiary round ought to have some effect on the Abomination.
"Go for it," Raoul urged.
Derek aimed his unique weapon known as Pa's Pistol at the head of the Abomination and fired just as the creature strode towards him. At point blank range he did not miss and the Abomination's head exploded in a welter of gore of flames.
"Woohoo!" Derek exclaimed.
"Way to go, Derek," Raoul said excitedly.
(Pa's Pistol is one of the very few weapons in the game that can kill an Abomination. It inflicts 3 points of damage per shot. Although it can only fire once per Action and has a lowly range of 0-1, it is still a formidable weapon. Derek was very lucky to have found it so early in the game. Naturally, this kill advanced him to the yellow level and he too, gained a fourth Action per Turn.)
He fired three more times at the two Runners but only managed to kill one of them - a Toxic Runner. 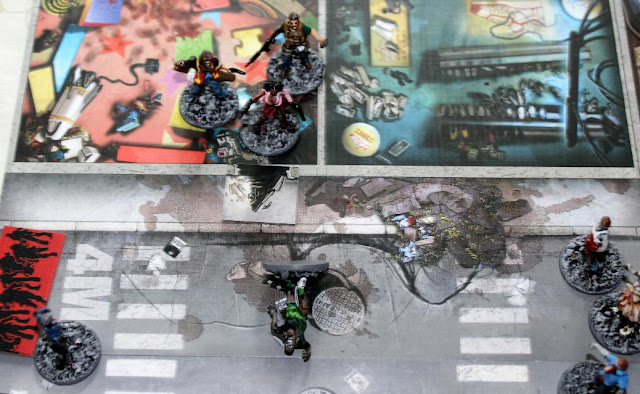 NEEMA. "Are you boys having fun?" The beautiful, dusky corporate executive asked. "I hope you've left some targets for me."
The remaining Runner proved to be very elusive to hit. Neema's .44 Magnum fired three times, missing twice before striking the Zombie in the forehead, killing him instantly. 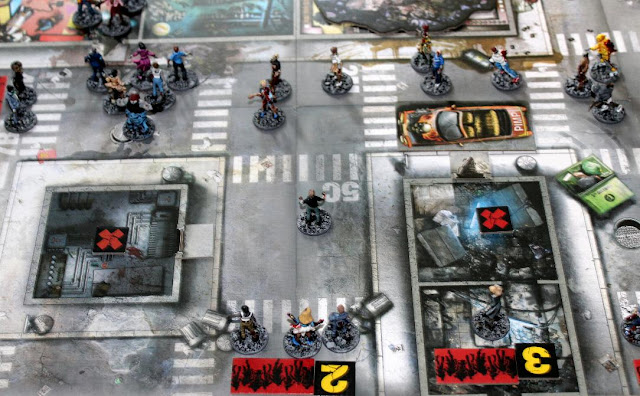 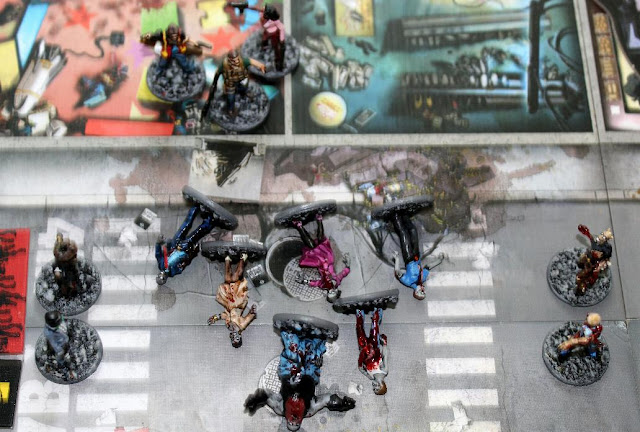 RAOUL. "You kill six Zombies and six more take their places," Raoul griped. "Let's thin this crowd down some more."
He stood in the doorway and fired his AA-12 a total of twelve times. Exactly half of his shots were misses or glancing hits but the other six were devastatingly effective and he killed five Walkers and a Fatty. 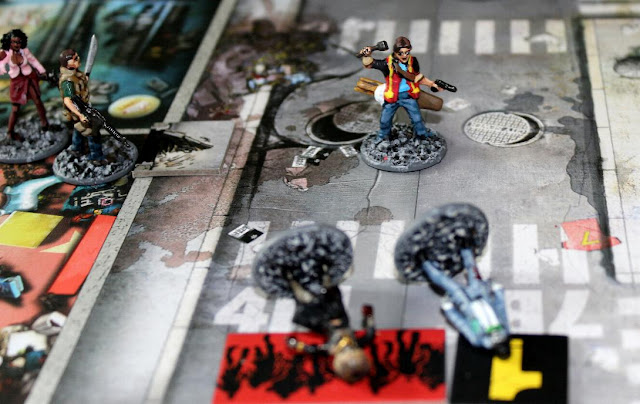 DEREK. "Good work, Raoul," Derek acknowledged as he stepped outside and saw that the Zombie horde was widely spread out now. He concentrated his fire from Pa's Pistol on the two Walkers approaching from Spawn Point 1 to the west of him. He missed once but hit twice and again, the Zombies died in a messy explosion of blood and flames.

NEEMA. "I've got your back, Derek,"  Neema said as she also stepped outside the mall to stand behind her young colleague. Three Walkers were approaching from the east. Two of them were Toxic Walkers and Neema scored fatal head shots on both of them but she missed the third Walker. 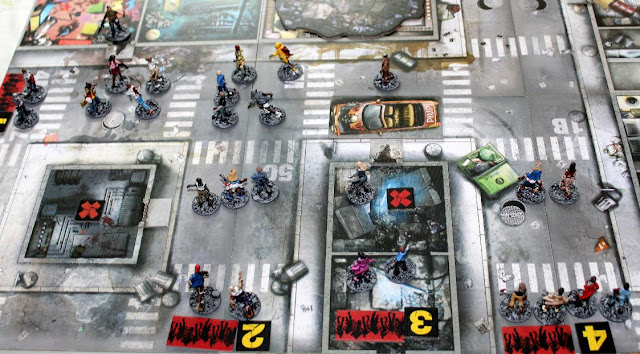 ZOMBIES. The female Walker who Neema failed to hit advanced to within striking distance of Neema and a Runner charged at Derek. Two more Walkers replaced the pair that Derek had just slain at Spawn Point 1. Two Toxic Runners sprinted from Spawn Point 2. A pair of Walkers arrived at Spawn Point 3 but four Walkers emerged from Spawn point 4.
TURN 8 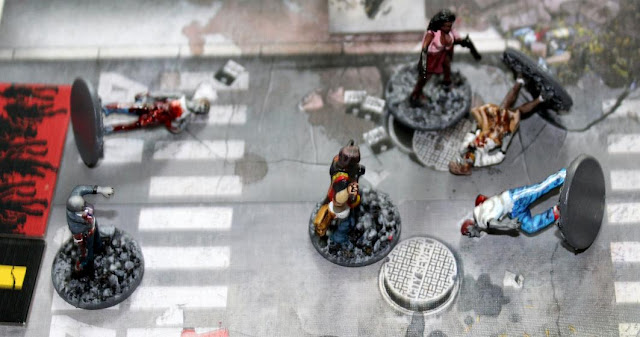 NEEMA. Neema could have shot the female Walker who charged her but instead she used her Machete to decapitate the Zombie, although it did take two blows to completely sever the head. Just as the Runner reached Derek, Neema brought her Machete down on the back of the fast moving Zombie's head, splitting his skull open. She spun and snap-fired her .44 Magnum Revolver. The heavy calibre bullet entered the right eye socket of a male Walker and blew half of his head off.

DEREK. With four Walkers all within close proximity, Derek fired once at each of them with Pa's Pistol. He scored a better than average three kills. He was growing very fond of this unique weapon and its lethal ammo.

RAOUL. When Raoul exited the mall, he saw that his two colleagues had eliminated all but three of the Zombies nearest to the mall. He opened fire with his AA-12 Atchisson Assault Shotgun. The heavy weapon bucked wildly and six rounds went wide or high but three rounds hit and he killed a female Walker and a pair of Runners. The immediate around the three Survivors was now clear.

ZOMBIES. The remaining Zombies were single-minded and continued their advance to where all of the gunfire was coming from. Two Walkers entered the scene from Spawn point 1. Two Toxic Walkers arrived from Spawn point 2. Spawn Point 3 spouted three more Walkers and a single Runner arrived at Spawn Point 4.
TURN 9 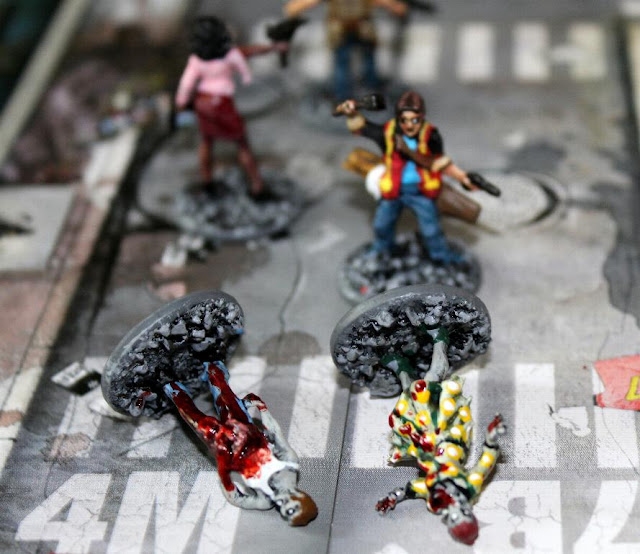 DEREK. "Oh, you think you can sneak up behind us, huh?" Derek asked, not expecting an answer. The two Walkers moaned at him as they shuffled slowly towards him. Derek's shooting with Pa's Pistol was erratic. He missed, he hit, he missed and he hit. Both hits were clean head shots. The threat had been neutralised. 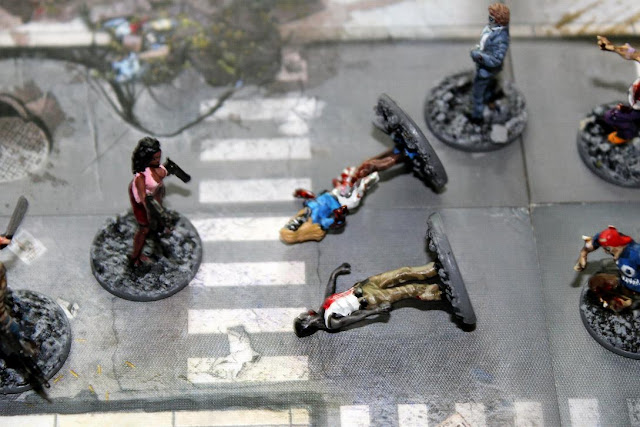 NEEMA. Neema's shooting with her .44 Magnum was identical to Derek's - two misses and two hits out of four shots. A pair of Walkers collapsed to the ground with fatal head wounds. 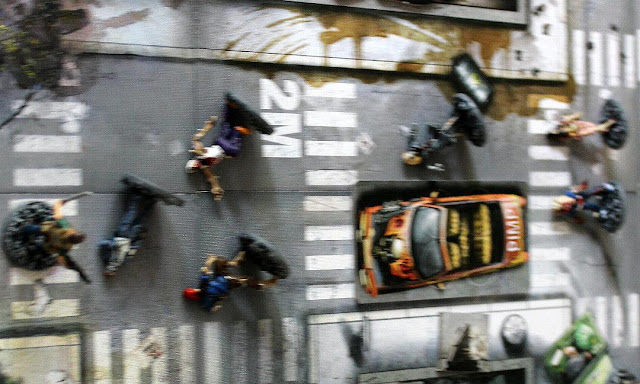 RAOUL. Pistols were fine for killing small numbers of Zombies but for larger numbers an automatic weapon or area effect weapon was required. Raoul's AA-12 Assault Shotgun unleashed a barrage of 12 Gauge rounds that tore through two Toxic Runners, two Toxic Walkers and two Walkers. (Apologies for the out of focus photo. I usually check each shot before taking the next one but in this case I must have forgot. These six new kills advanced Raoul to the orange level and he choose the Medic skill. He could now heal one wound on any Survivor in the same Zone as him, including himself, once per Turn.) 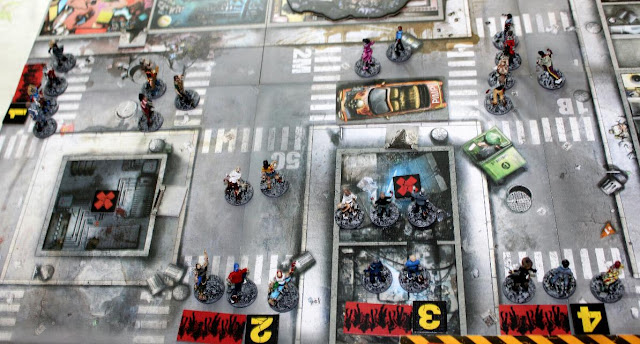 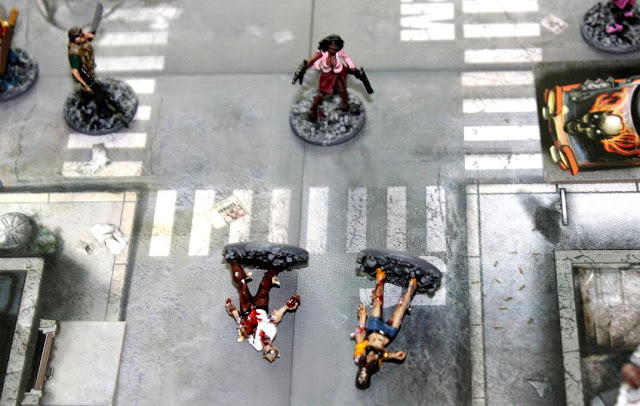 NEEMA. Moving eastwards to the T-junction, Neema stopped to shoot at a pair of Toxic Walkers. Her first shot missed but her next two were deadly accurate and she dropped both Toxic Walkers. 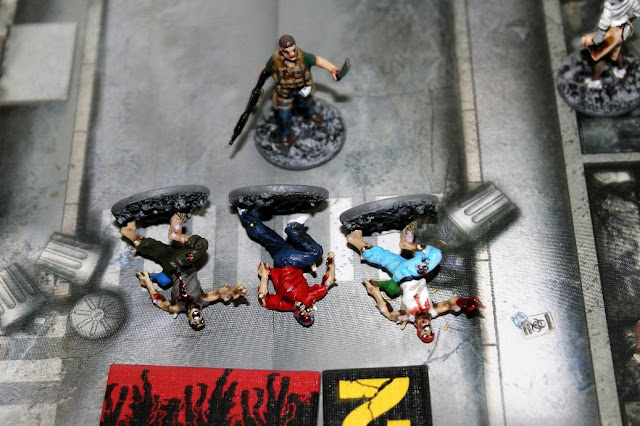 RAOUL. Raoul moved past Neema to check out the small one room building to his right. But first he had three Toxic Runners to deal with. They went down hard as each one required two shots to kill but Raoul's kill ratio continued upwards. 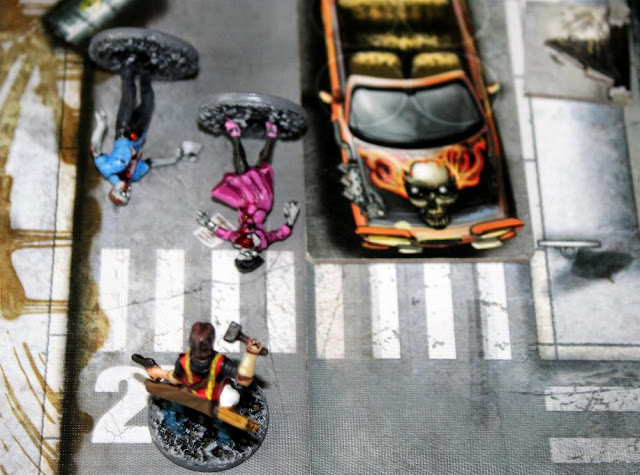 DEREK. Derek walked to where Neema was standing. Pa's Pistol spat fiery death three more times, missing once but killing twice as two Walkers moving alongside a second pimp-mobile fell to the ground with their heads destroyed and on fire. 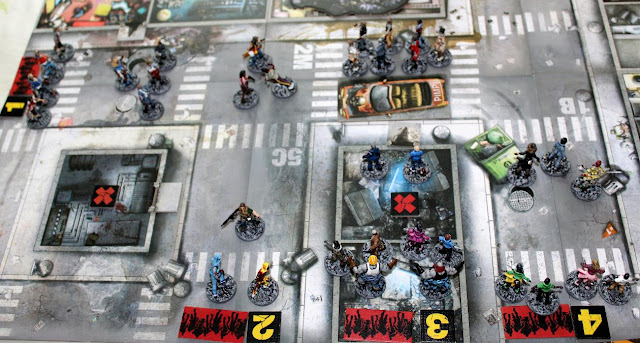 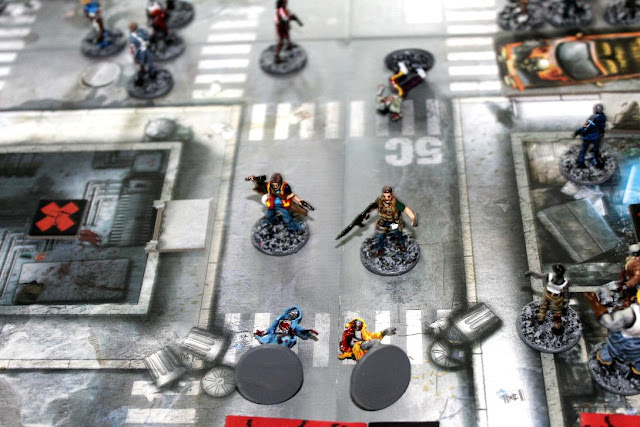 DEREK. "You're dead-meat," Derek snarled as he swung his Claw Hammer at the head of the Runner charging towards him. With a satisfying "Thunk!" it cracked open the Runner's skull at the forehead and the Zombie dropped down  in front of him. He moved south a short distance to team up with Raoul.
"I'll get these two," Derek said, "there are far more targets for your Shotgun back there."
Derek was clearly on a roll. He fired Pa's Pistol twice and scored fatal head shots on the two newly arrived Runners. 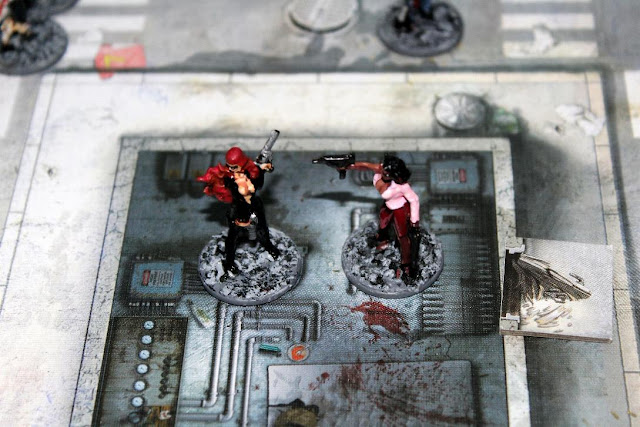 NEEMA. "Okay, let's see if we can find anyone in here," she said as she moved to the small unmarked one room building. Her Machete shattered the lock on the door. She cautiously stepped inside the darkened room and cried out in delight.
"I've found someone! Don't be afraid. We're here to help. I'm Neema Freeman. Who are you?"
An extremely attractive young woman with long red hair and wearing a skintight shiny black catsuit stared at her with obvious relief.
"Oh, my God!" she gushed with obvious relief. "Thank God you're here. I heard gunfire outside and hoped you wouldn't pass by. I'm Elsa. Elsa Bryce-Howard."
(When Neema opened the door I had to draw a card from the Zombie deck to see which Zombie or Zombies spawned in the room. The card I drew stated that all Runners gained an extra Turn. This was very lucky for me as Derek had just killed the last three Runners on the board. Ha, ha, ha!) 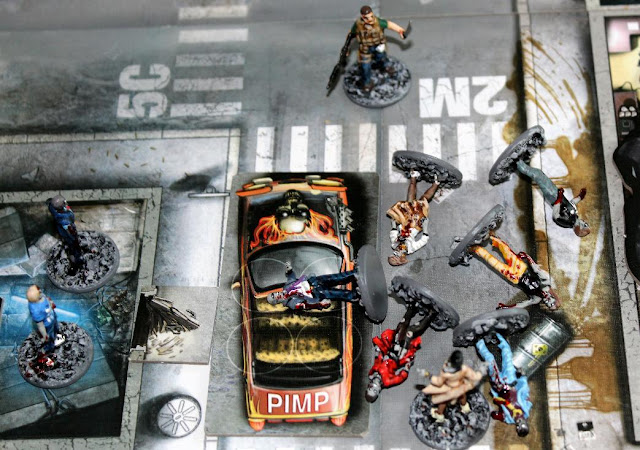 RAOUL. Raoul moved back the way he'd come to stand in front of the parked pimp-mobile. Seven Walkers stood in front of him. Out of nine shots from his AA-12, he missed three times but scored six kills. That was impressive shooting. 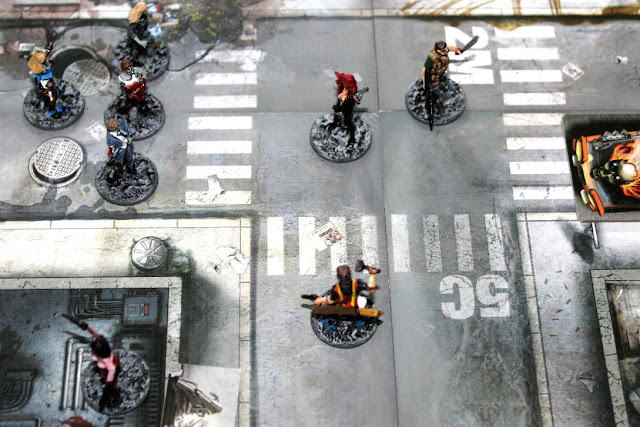 ELSA. "I need a weapon," the former cat burglar stated. "I ran out of ammo recently. Hopefully, someone left something useful in here."
Elsa's luck was in. Hidden amongst the rubble and debris she found a Chainsaw. Better still, it had a full tank of gas.
"That's better!" she smiled. "Now, let's get outta here!"
"Go," Neema ordered. "I have two male friends outside. They'll be glad to see you."
Elsa nodded ingratitude and ran out of the building, blinking at the sudden sunlight. She ran past Derek, smiling at him, before coming to a stop alongside Raoul.
Introductions were quickly made. They had to be quick because suddenly they were surrounded by Zombies. 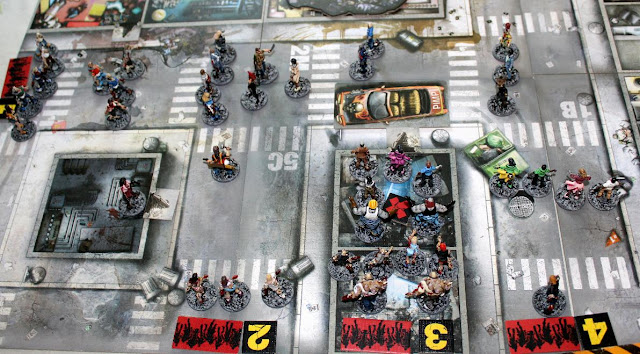