Up to now, in this series of posts I have concentrated on various supervillains I made and converted for my GURPS Supers and Villains & Vigilantes campaigns. Now it is time to redress the balance and show you some of my superhero figures. I start with the trio of superheroes who formed the player character team in my GURPS Supers campaign which I ran in 2003 and 2004. My good friend, Dave, was almost as big a fan of Marvel Comics' Wolverine as I was of Vampirella. He wanted to play the X-Men mutant and together we worked out his stats for my campaign. Rob, whom I've known since the early 1980's, came up with a character called Gothique, who originally appeared in the Warmachine steampunk war-game produced by Privateer Press. I also took part as a player in my campaign as well as being games master. I simply had to play Vampirella. I left most of the decision making to Dave and Rob and mainly just helped out in combat situations. It is interesting that all three superheroes probably work best as loners but in my campaign they bonded well and made a very effective team. Let's take a closer look at them.

Aeryn Gothique was born in the kingdom of Cygnar, one of four major warring states that made up the Iron Kingdoms. As a Dark Elf, she was trained in the art of war from an early age. She excelled at combat and quickly rose to a rank of major prominence within her clan. Her world was a mixture of science and magic containing high tech battle-gear that became rarer as the long wars dragged on for centuries. It was whilst on a solo mission on the remote island fortress of Dragon Lord Toruk, leader of the Kingdom of Cryx that she met her match. A powerful necromancer whom she was supposed to assassinate, defeated her by opening a portal to another dimension and banishing her there. That dimension was Earth in the year 2003. She knew enough to elude capture from the authorities and was able to study this new world and its inhabitants from deep cover. She was intrigued to learn that super-powered individuals like her existed, although very few were friendly. She made a vow to continue her crusade against the Forces of Darkness and hopefully find a way back to her home dimension. She possesses very few super powers (Extra Fatigue +7, Extra Hit Points +7, Higher Technology +2 (i.e. TL:10), Increased Speed +4 and Magical Aptitude level:1) but she does have a wide range of combat advantages and skills. She also knows 30 magic spells. She cost 1,400 points. Her figure is a conversion of the DC Heroclix figure of Huntress. I replaced her twin mini crossbows with a compound crossbow and a long sword. Both weapons came from a boxed set of Games Workshop plastic Dark Elf Warriors. The figure is a good match to her illustration.
Vampirella is no ordinary vampire. She is the daughter of Lilith, the first vampire to roam the earth. She thought she was born on the planet of Drakulon, but later learned that Drakulon was a realm of Hell. In her quest to discover her true origins, Vampirella discovered that she was the first of a new breed of vampire, evolved for the new millennium. After many adventures Vampirella was killed by Mistress Nyx but Lilith resurrected her. Vampirella knew that she had to rid the world of all other vampires and demons to win some redemption for her mother and possibly for herself. She is without any of the traditional weaknesses of vampires - immune to garlic, sunlight, religious items or even holy water. She does possess supernatural strength, speed and ferocity but her greatest power lies in her iconic beauty and irresistible sensuality. For GURPS Supers I gave her Bite and Claws, Enhanced Strength 50, Extra Hit Points +10, Flight and Super Flight, Increased Speed +8, Regeneration, Regrowth and Vampiric Immortality and Invulnerability. She cost 2,000 points. For my figure of Vampirella I chose this sculpt of her by Blood Moon Miniatures. Sadly, this figure is now out of production. It is my favourite miniature of my favourite superheroine. She just oozes sex appeal. 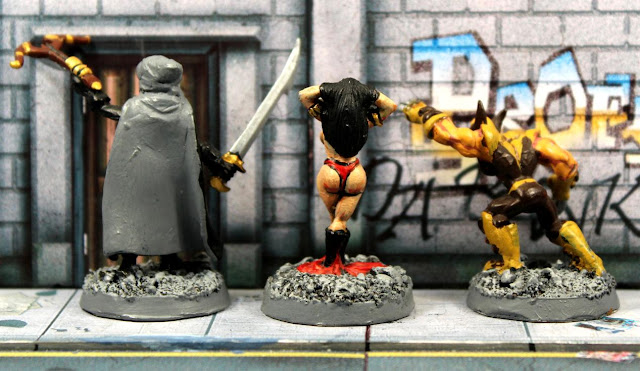 Wolverine is one of Marvel Comics most iconic and popular superheroes and his background is well documented. Little is known of his past save that he was born James Howlett in Alberta, Canada in the 19th century. He left home after killing his father's murdered and took the name, Logan. He fought in both World Wars and spent much time in China and Japan where he learnt many martial arts. After WW2, he was recruited by the CIA as part of their Project X operation. It was here that his skeleton was bonded with an indestructible material called Adamantium. He rebelled and slaughtered almost everyone in the secret complex before escaping. Soon after he was recruited by Professor Xavier into the X-Men. Between his mutant powers, Weapon X modifications and his years of experience, Wolverine is one of the deadliest warriors the world has ever seen. On each hand, Wolverine has a set of three retractable Adamantium claws, able to slice through almost anything. His accelerated healing factor lets him survive damage that would kill most others, although it doesn't prevent him from feeling pain. He is not indestructible. If the injuries are extensive enough, especially if they result in the loss of vital organs, large amounts of blood, oxygen deprivation and/or loss of physical form, he can die. Dave and I came up with the following super powers for him - Alertness +11, Bionic Reconstruction, Breath Holding level:4, Claws (Retractable), Discriminatory Sense of Smell, Extra Hit Points +5, Increased Speed +3, Metabolism Control level:3, Passive Defence 4, Psionic Resistance level:6, Regeneration, Regrowth and Silence level:5. He cost 2,000 points, the same as Vampirella. His figure is based on a Marvel Heroclix figure of Wolverine. I repainted him as Dave wanted him in this ochre and dark brown costume.
The picture below shows the portraits I used on my GURPS Supers character record sheets. The portrait of Gothique was given to me by Rob. He had photocopied it from either the Warmachine rulebook or one of its supplements. I digitally coloured it. It would have been helpful if he also supplied me with her background and biography but Rob was always an apathetic bugger and so he left me to create her background. Lazy sod! My portrait of Vampirella is based on a photo of a 6" action figure by Moore Collectibles of her that I own. Dave had a 10" tall statue of Wolverine and his portrait is taken from the box art of that statue.