A slight change of pace here. I wanted to show you a couple of 7TV2e figures that go together very well - the TV set and the TV cameraman. 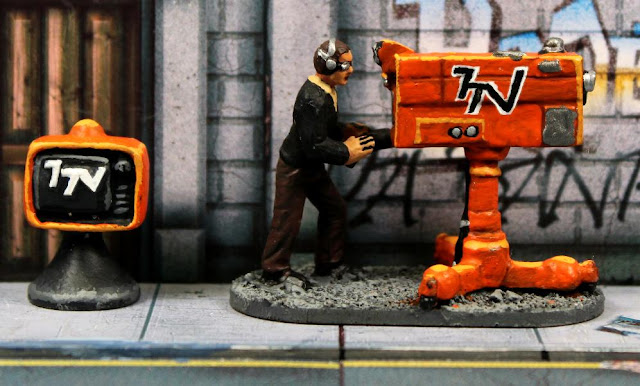 The television set comes with the boxed starter set for 7TV2e by Crooked Dice Games. Its purpose is to represent a Maguffin, an objective of some considerable value that may be found during the course of a game. Full rules for using the Maguffin can be found on page 18 of the Producer's Guide. The Maguffin counts as a normal objective token apart from the following -
For those who like narrative play a list of items that the Maguffin could be are listed by genre in this section of the Producer's Guide. Of course, the TV set also makes a nice furniture item to add to a building's interior. 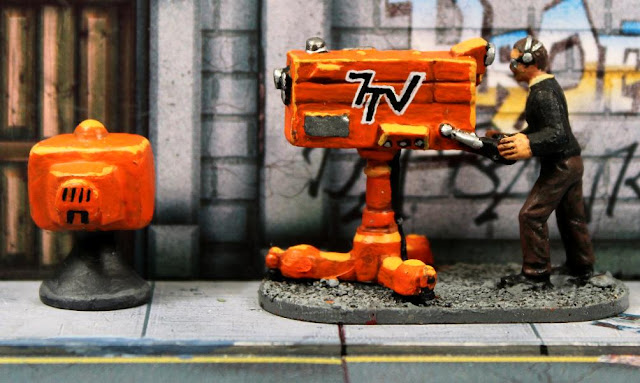 The TV Cameraman is a Neutral Extra usable in any genre and with a Rating of just 1. Among his abilities, he cannot be the subject of any strikes for any reason and he cannot gain any statuses and counts as passing any Spirit tests. In addition, his owner may select one friendly model within 6" of the cameraman and activate him for free providing he has not already activated this turn. He's a useful character to have although he is very slow with a Move of 2". The figure comes in three parts - separate arms and body, whilst the camera is a two-piece casting - camera and stand. The figure is supplied with a 40mm diameter base, which I discarded and replaced with a 25mm by 50mm rounded corners cavalry base made of MDF. This is a much better base, in my opinion. For the figures. I simply copied the colour schemes of the camera and cameraman from the Crooked Dice games website. For an interesting alternative colour scheme do check out this version by Colgar 6 - http://colgar6.blogspot.co.uk/2016/07/7tv-cameraman.html
He went for more muted, natural colours, which I really like. The cameraman is a great figure and I hope that Crooked Dice games produce more TV crew members to use. There is a quite a list they could choose from.
The TV Cameraman with his Camera costs £5.00 from the CDG webstore (you can find the link for him  here)and you can get the TV set Maguffin for £10.00 if you order the 7TV2e plastic counters set. It is not available separately.
Posted by Vampifan at 09:55