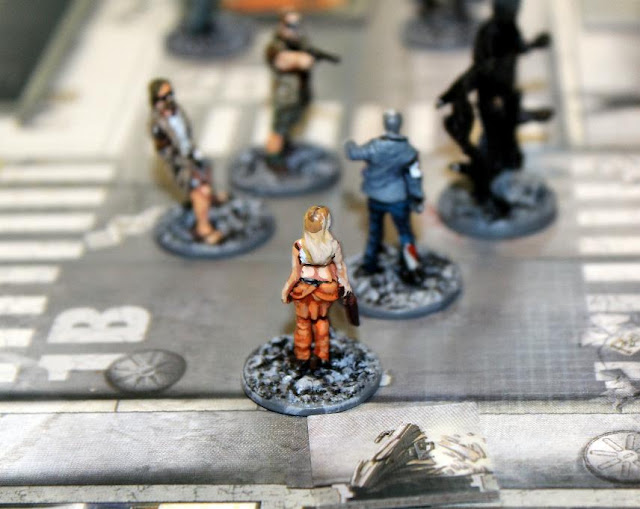 DAKOTA. The ex-convict moved into the reception area of the building she was exploring and carefully searched the room. She got lucky and found a fully loaded 12 Gauge Pump-Action Shotgun hidden behind the reception desk. She replaced her Sawed-Off Shotgun with the Pump-Action and stepped outside to see Gary and Ross about to be attacked by a Zombie Walker and a small flock of Crowz. 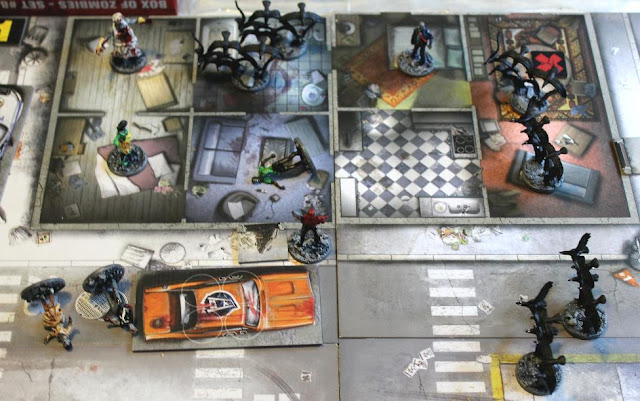 ELSA. The cat burglar blasted a pair of Walkers with her specially crafted Ma's Shotgun combi-weapon. Using her lock-picking skills she expertly unlocked the door to the large building. Inside, the building was split into seven rooms, indicating it was an apartment. A single male Walker faced her in the lobby. Moving clockwise away from her were a bedroom containing a female Walker, a utility room containing one Fatty, a bathroom with two small groups of Crowz residing there, a second bedroom with another male Walker, a large lounge containing two more sets of Crowz and an empty kitchen. She raised her 9mm Uzi Sub-Machine Gun and fired a short burst into the head of the male Walker facing her. He died messily but quietly. 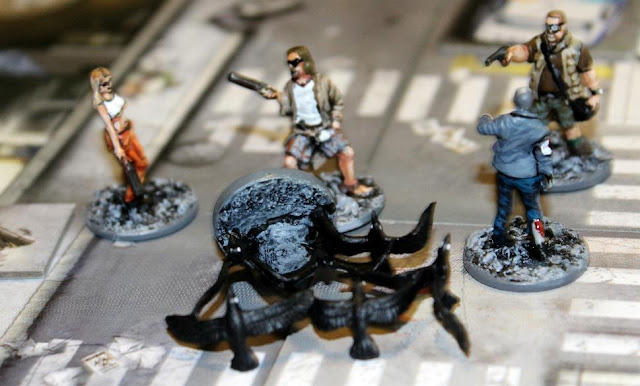 GARY. The miniature figures sculptor defended himself against the Crowz with his Crowbar. Frantically, he swung the make-shift weapon three times before the Crowz were eliminated. 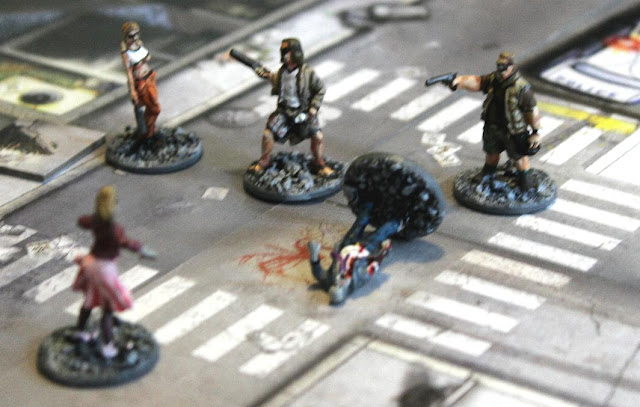 ROSS. Although he now worked as a warehouse manager, Ross used to be a U.S. Army veteran and was skilled in both melee and ranged combat. He used his Machete to behead the Walker who was threatening to take a bite out of him. His first swing struck the Walker in the shoulder but his second swing caught the Walker in the side of the neck and decapitated him. He fired his 9mm Pistol at the female Walker who was closing in on him and his two colleagues. One of his two shots went wide but the second hit the emaciated woman in the centre of her chest and incredibly, had no discernible affect on her.
"Head shots!" he reminded himself belatedly. 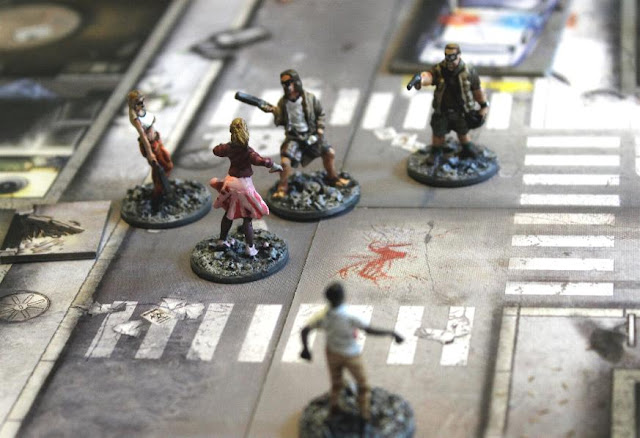 ZOMBIES. The female Walker whom Ross had failed to kill surged forward to attack Dakota or Gary. She seemed undecided who to bite first. 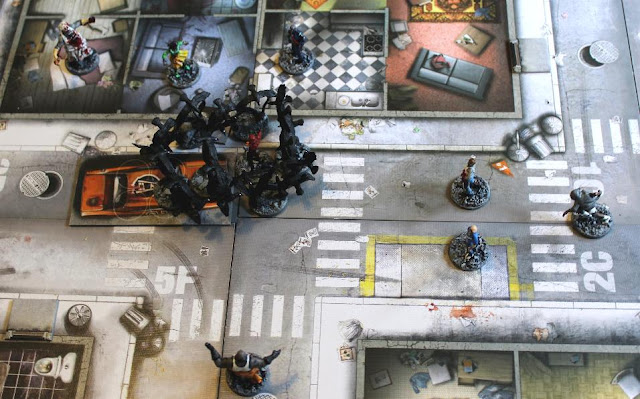 Elsewhere, the other Zombies advanced and poor Elsa suddenly found herself surrounded by six flocks of Crowz. It looked bad for her! Spawn Points 1 and 4 thankfully remained empty but two more flocks of Crowz emerged from each of Spawn Points 2 and 3 in the south-side of the city.
TURN 6 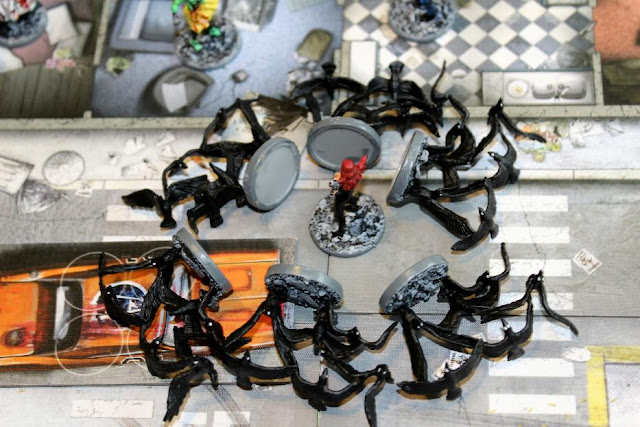 ELSA. "Please, God, let me survive this," Elsa prayed. She knew she only had one chance of surviving. She had to spin and spray the Crowz with automatic fire from her Uzi. She screamed long, hard and loud as she held the trigger down and spun through 360 degrees. Miraculously, she managed to shoot every single one of the Crowz out of the sky. She had survived and she breathed a heartfelt sigh of relief.
"Thank you, God!" she offered with genuine sincerity as she raised her eyes towards Heaven.
(After Elsa had killed the first flock of Crowz she advanced to Yellow Level and gained the +1 Action skill. This allowed her to fire four times this Turn instead of three and with her SMG firing three times per action, she was able to kill all six sets of Crowz.)

GARY. Once more he swung his crowbar and this time it connected with the side of the female Walker's head, killing her instantly.
"Nice!" he gloated. He raised his Rifle and fired twice. His first shot took out a male Walker and his second shot despatched a small flock of Crowz.
(These three kills were sufficient to advance Gary to the Yellow level. He also gained the +1 Action Skill.) 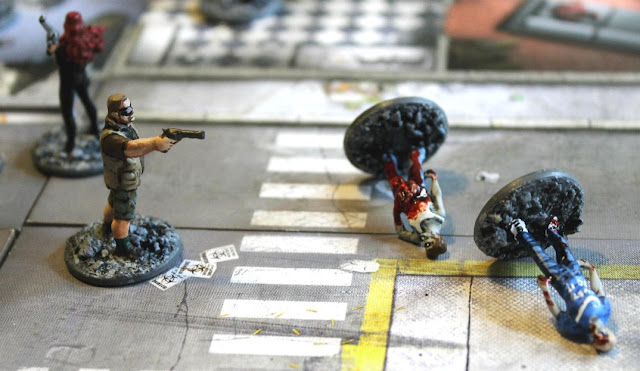 ROSS. "You did good there, Missy," he acknowledged as he moved down the main street to stand alongside Elsa.
"Thanks," she replied with a bright friendly smile.
"I'll deal with these two," Ross announced. This time he remembered to aim for the head and both of his shots were accurate and deadly. Two male Walkers dropped down dead before they could reach him or Elsa. 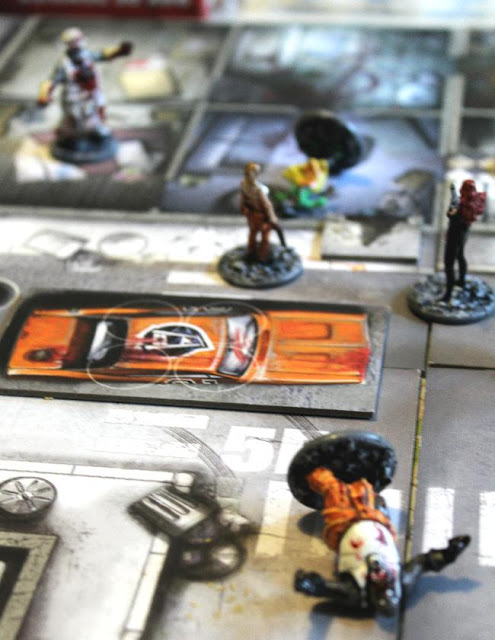 DAKOTA. "You rock, girl!" she said with a grin as she strode along the main street to catch up with her friend, Elsa. Then she noticed something that changed her mood.
"Ooh, fat guy!" the busty blonde said as he aimed her 12 Gauge Shotgun at a Fatty approaching the T-junction she stood in. The shot caught the corpulent Zombie full in the face and left him a bloody ruin on the ground.
(Killing the Fatty gave her enough experience points to advance to Yellow level. She also gained the +1 Action Skill.)
She spun and fired again, this time pointing her Shotgun to the entrance of the large apartment. A female Walker who was about to exit the building went down with half of her head missing as the deadly Shotgun blast ended her undead existence.

ZOMBIES. One flock of Crowz from the south-side flew at Gary. Another two flocks flew at Dakota, Elsa and Ross, and were quickly joined by a single Zombie Runner. Two Walkers emerged from Spawn Point 1. Three Walkers spawned from both Spawn Points 2 and 3. From Spawn Point 4, four Walkers arrived. Their numbers were increasing.
TURN 7 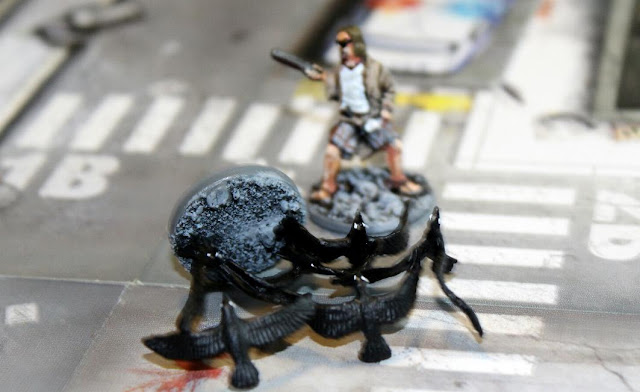 GARY. The Crowz preparing to attack him were far too close to hit with his Rifle, so Gary swung his Crowbar at them. Any survival instinct the Crowz may have possessed before becoming undead had deserted them. They made no attempt to dodge the blows and were mercilessly mown down one by one. Greatly relieved, Gary turned round and headed back north to the parked police car. He searched it once more and succeeded in finding a Chainsaw.
"Groovy, baby," he drawled doing his Bruce Campbell as Ash from The Evil Dead impression. He stuck his Crowbar in the side of his belt and replaced it with the Chainsaw as he returned to the T-junction. 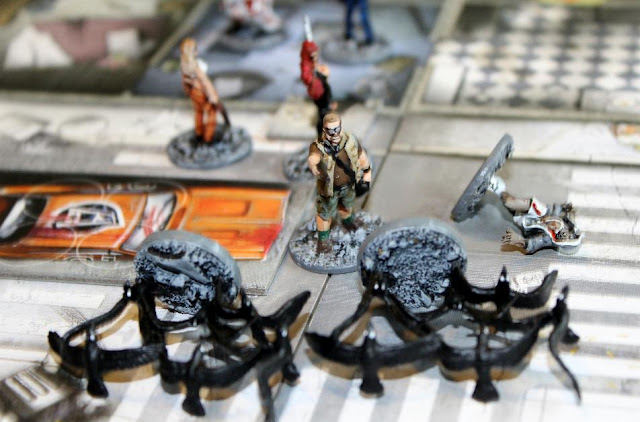 ROSS. Given the danger he was in, Ross remained calm. He wielded his Machete with expert precision and massacred the two flocks of Crowz and the male Runner. He turned to the two women behind him with a grin spread across his face. They both nodded in appreciation.
(These kills helped Ross advance to the Yellow level and as usual, he gained the +1 Action Skill. Now all four Survivors had attained Yellow level.) 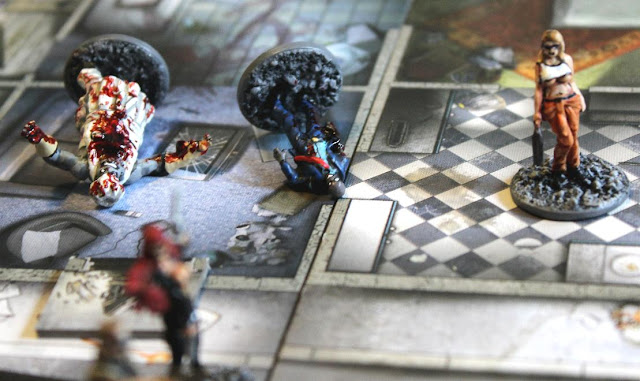 DAKOTA. "I'll check out this apartment," she told Elsa. "You go ahead and check out those two buildings further down the street."
"Are you sure you'll be okay on your own in there?" Elsa asked in a concerned voice.
"Don't worry. I'll be fine," Dakota replied confidently as she cranked her Pump-Action Shotgun. Four times the sound "Kerchink!" was followed by a loud boom as she turned the male Walker and male Fatty standing in the lobby of the apartment into mincemeat. She gingerly stepped over their corpses and moved slowly into the empty kitchen. 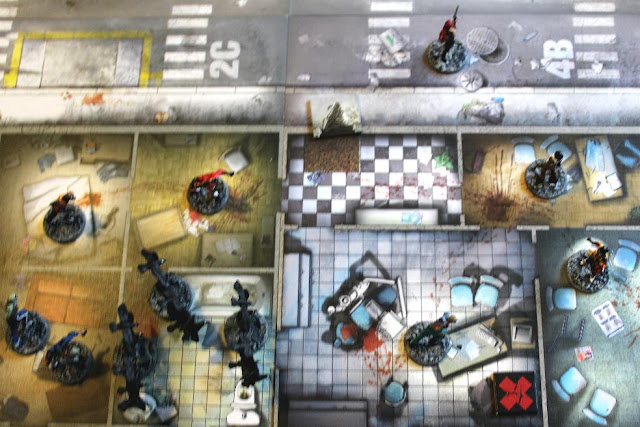 ELSA. With a clear run ahead of her, Elsa jogged down the main street to the next building on her right. She paused by the front door to retrieve her lock-picks from her back pocket. In no time at all, she had unlocked the wooden door. Pushing it open and seeing that the room beyond it was empty she moved even further down the street. Unbeknownst to her, this new apartment was far from empty. Inside were three groups of Crowz, five Runners and two Walkers.
(Note that I forgot that using her Break-in skill to open doors it counts as a free action. She could have moved across the street to unlock the door to the end building north of her as well. Ah, well!) 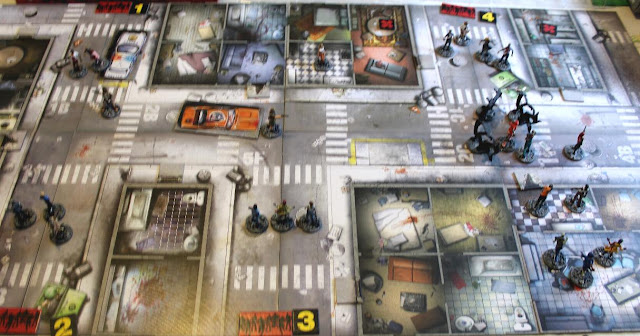 ZOMBIES. There was a lot of movement from the Zombie horde as they all advanced towards Main Street but no contact was made with any of the four humans. From Spawn Point 1 in the north, two Walkers arrived. From the south at Spawn Point 2, two Runners arrived and two more Walkers arrived at Spawn Point 3. Finally, from the northerly Spawn Point 4 came two more Runners. So far, the Survivors had coped well and were making good progress. But as they were soon to discover, fate can play cruel tricks on you. Not all of them would survive this encounter!