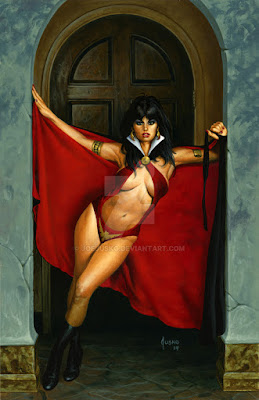 Another month is almost over and that means it's time for another one of my Monthly Musings posts. As always I start off with a picture of my beloved Vampirella. Once again, this delightful portrait has been painted by the extremely talented Joe Jusko, my favourite Vampirella artist. It is rare to see Vampi wearing a cloak.

I haven't done much in the way of gaming this month, although I did manage to play a game of Zombicide, which I recorded as a three part batrep on my blog. That was fun but it didn't work out as I was hoping it would and I lost two of my four Survivors. Not a good result at all.

On the modelling front I have had a very busy month. I have made a new 4Ground 28mm scale MDF Wild West building - a Hardware Store. Most 4Ground buildings come without furnishings but I have been adding lots of interior detail to this particular model. After a very long absence (too long, to be honest) I have got back to making card buildings and card furnishings. I made a couple of World Works Games Wild West outdoor toilets and loads of furniture items for my Wild West buildings, including the aforementioned Hardware Store. In addition, I have also made every single figure I own for Shadows of Brimstone. There were a LOT of figures to make as I have been buying quite a few expansion sets for the game since the start of the New Year. All have been based and had their bases textured and all have been primed. I have finished painting a few of them and have a lot more on my painting desk. I am really into this game and I'm focussing all of my attention on it. You can expect to see a lot of posts about Shadows of Brimstone on both of my blogs over the coming months. 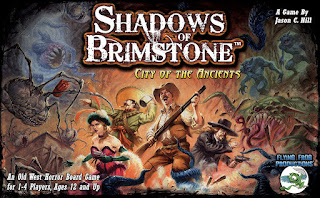 This seems like a good time to show you all of the sets I have bought for Shadows of Brimstone. At Christmas 2015 I bought the two starter sets for the game. First up was City of the Ancients, which features the other world of the frozen over Targa Plateau, a dead world that has slipped into an Ice Age. This game can be played in the ruins of a frozen city on Targa or in the mines near the cursed town of Brimstone. 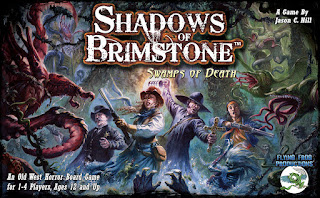 The second starter set I bought for myself was Swamps of Death, which features as its other world, the Swamps of Jargano. This hot and humid swampland is populated with dangerous plants and creatures. The double-sided map tiles feature the Jargano swamps on one side and an abandoned mine on the other. Undead fans should note that this is the set that contains the zombie figures. 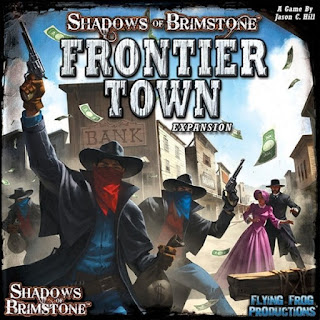 The first big expansion set I bought was the excellent Frontier Town. Of all the sets for the game this one is by far, my favourite. After each adventure in the mines or on another world, the Heroes can visit a town to sell their loot, restock on supplies or heal any injuries. What this expansion does is offer far more choices for what happens in town and on the way there as well as providing options for the size of the town and the type of town. All of which is great, but when you add in the options for having separate adventures in town, you soon come to realise that this is a "must have" expansion set. The board for the town encounters is a work of art and quite stunning. 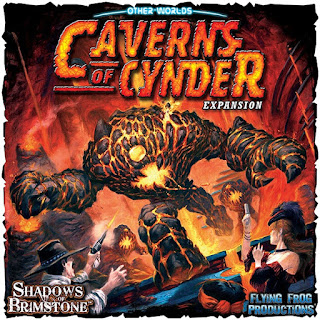 My most recent acquisition for Shadows of Brimstone was this expansion set, Caverns of Cynder. This provides an extra other world setting, the burning Caverns of Cynder, home to many dark and ancient evils such as the fiendish Lava Men. This set is severely lacking in figures, just three 28mm scale Lava Men are included, but it more than makes up for that with its game tiles, counters, rules and scenarios. The double-sided game tiles feature another abandoned mine on one side and the Caverns of Cynder on the other side. Note that all three mines featured in the sets are different and you can mix and match them if you wanted to create your own scenario adventures. 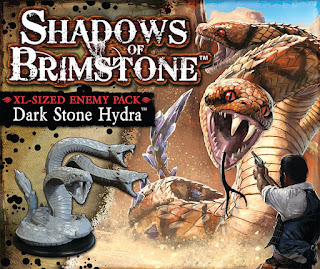 Next up were a pair of giant monsters I bought. These are mightily impressive beasts, standing roughly 75mm tall and fitting on 60mm diameter bases. The Dark Stone Hydra does not come from an other world but is a mutated rattlesnake found in the area surrounding Brimstone and created by the twisting powers of Dark Stone, which releases Void energy to any who come in contact with it for too long a period. The Dark Stone Hydra is fast and deadly. It regenerates damage done to it every Turn although it does lose power the more heads it loses. 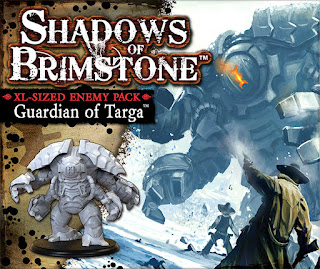 The Guardian of Targa is a gigantic and terrifying construct, found in the deserted frozen cities on the Targa Plateau. Its Hardened Shell has withstood the ages and can easily withstand simple gunfire. Though mainly a melee fighter with its four crushing arms, the Guardian also has a burning laser it can fire from its single lifeless eye at the start of each Turn. Though difficult to destroy, the Guardian can have its Control Systems damaged as it takes Wounds, reducing its effectiveness as more and more of its systems shut down and its arms go dead.

Finally, I also bought four more sets of figures and whilst they are all a lot smaller than the Hydra and the Guardian, they are still very nasty threats to the Heroes. 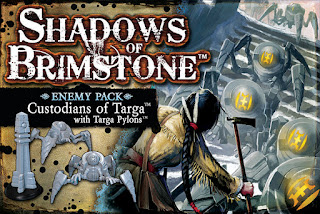 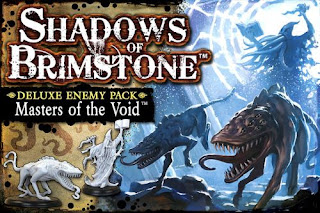 The Masters of the Void set contains 3 large Void Hounds and 3 Void Sorcerers. Void Hounds lay in wait within the Void, choosing the right time to strike. Attacking as a pack, they phase in and out of reality as they move, giving them a variable Defence value. Void Sorcerers are predominantly ranged enemies, preferring to strike from a distance by firing Void Bolts as they chant their foul spells. Their powerful Magik both protects them and allows them to rain down destruction on their foes. 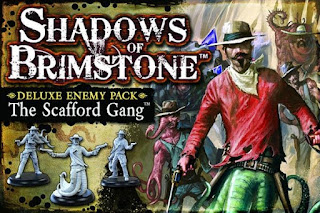 The Scafford Gang is a motley crew of Mutant Outlaws, each plagued with mutations of various sizes and shapes. They are led by Colonel Benjamin Scafford, a Confederate veteran of the American Civil War and a hardened soldier. His strong leadership and ruthless cunning have earned him the unending loyalty of his gang and made him one of the most successful Outlaws of all time. This set contains 7 figures - Colonel Scafford and 6 Mutant Outlaws sculpted in 2 poses. 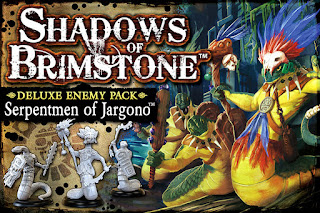 The Serpentmen of Jargano are an indigenous race from that world. Fiercely tribal, the Serpentmen have built a civilisation on brutal warfare and massive stone temples to their Serpent Gods. They stalk the swamps, hunting their prey and protecting their territory from outsiders and other tribes that would conquer their lands. Though highly intelligent, they are cold-blooded killers, calculating and ruthless. This set contains 1 Serpentman Shaman and 6 Warriors sculpted in 2 poses.

There are other sets available for the game and new sets are being made all of the time. I won't be purchasing them all but I will try to buy those that catch my eye. Even though I have painted a few figures for this game, I'm not quite ready to showcase them just yet. So, next month will mainly be taken up with reviews of the figures from the Zombicide: Black Plague boxed set. Oh, and there will probably be another Zombicide batrep. Quite a few of you wanted to know what happened to Elsa and Gary after their fateful encounter with the Crowz. All will be revealed.
Posted by Vampifan at 08:00