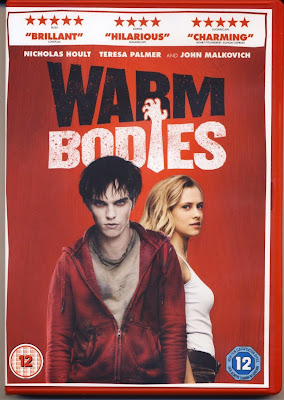 When I got back home from hospital one of the first things I did was to send an order off to Amazon.UK for a few DVD films and books I had missed. One of the films that I bought was Warm Bodies, a zombie romantic comedy. I can remember seeing the trailer for it months ago and I thought that it might be interesting to see. Sadly, I missed its cinema release, so I was determined to buy the DVD when it came out. I am mighty glad that I did because this is a thoroughly enjoyable film.
THE FILM. Warm Bodies stars Nicholas Hoult as R the zombie hero, Teresa Palmer as Julie Grigio, his love interest, John Malkovich as Colonel Grigio (Julie's father) and Rob Corddry as M the zombie. It was directed by Jonathan Levine. This Canadian production was low budget, but achieved high production standards and utilised a great location in a zombie-infested airport in Montreal. It was released on 8th February 2013 in the UK and a week earlier in America.
THE PLOT. A young zombie named "R" (he can only remember that his name began with an "R") retains a semblance of intelligence as he wanders aimlessly around an airport terminal looking for a meaning to his undead existence. His best friend is another zombie, who goes by the name of "M". The pair of them grunt to one another at the airport's bar. R's life changes when a small group of survivors raid the airport. Two major events change his life forever. First, he kills a survivor called Perry and eats his brains. Doing so gives him access to Perry's memories. Apparently, this is why zombies are so fond of eating brains. The second major turning point is that he sees another survivor in the fight, a young female called Julie Grigio. Perry used to date her and so R instantly falls in love with her. He saves her from the other zombies and takes her to his secret hidey hole inside a passenger jet stuck on the runway. It was at this point that I realised this was not going to be your normal zombie apocalypse film. What follows is a plot similar to Shakespeare's Romeo and Juliet play. Note the similarity of the lover's names. Slowly but surely, Julie comes to realise that R is different to other zombies and is really a nice guy. He has the power of speech, which helps to convince Julie he can be trusted to look after her. For the most part the other zombies ignore the couple but the really old zombies, known as the Boneys due to their resemblance to skeletons as they become seriously emaciated, are not fooled and cannot be persuaded not to eat humans.
THE VERDICT. I absolutely loved this film. It was refreshingly different to most zombie films. Note the 12 certificate, indicating this was not going to be a gorefest. Saying that, there were a few gory scenes early on in the film. My mum couldn't watch them! I enjoyed them but I wanted more gore. Yes, I am a sicko! There is a lot of humour in the film. And romance. R's love for Juliet grows so strong that he passes his love on to other zombies, starting with M. Soon there is a horde of friendly zombies looking for love. Not the ending you'd expect but totally in keeping with the film's premise. I must give praise to the special features on the DVD. When the extras on a DVD last longer than the film, as in this case, I know I'm going to be in for a treat... and I was. Special mention must go to Rob Corddry, aka M, who was incredibly funny and witty. The interviews with the cast and crew were always interesting and entertaining. This is a zombie film that you can watch with your parents and older children and has a real feel-good factor to it. Charming is not an adjective I'd normally use for a zombie film but it perfectly suits Warm Bodies. I give this film an 8/10 rating. It scores an extra point just for the special features.
Posted by Vampifan at 12:18 41 comments:

As Mikie told you earlier this week I'm back home. Recovery is still ongoing and it will take many weeks before I'm fully fit and mobile. At the moment I'm hobbling about on walking sticks whilst indoors and using a three wheeled Zimmer contraption for when I go outdoors (very rarely). In myself I feel fine. I'm typing this on a laptop as it's going to take me a month or more before I can get back to my upstairs den/bedroom. I'm confined to the downstairs of my house. As a consequence, you'll have to wait a while longer before I can get blogging on a regular basis again.Sorry!
I'd like to thank everyone for their support and well wishes during my long stay in hospital. They meant a lot to me and were greatly appreciated. I knew I was ill before I was rushed to hospital but I never realised how serious my condition was - a hole in my bowel, which was leaking poisons and toxins into my stomach. The four month recovery period in hospital was far longer than I expected. Still, it's great to be back home and I can't wait to get back to blogging, figure painting and model making.
Kind regards to everyone.
Posted by Vampifan at 14:10 58 comments: