Fighting to Survive by Rhiannon Frater 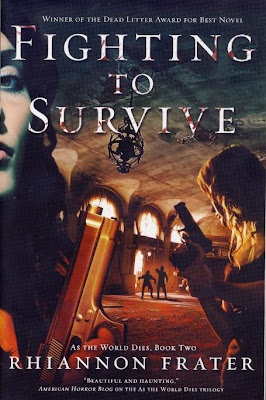 Fighting to Survive by Rhiannon Frater is the second book in her As the World Dies trilogy and it's just as good as book one, The First Days. In this action-packed sequel, the survivors of the small fortified town of Ashley Oaks decide to expand their walled compound by clearing out the town's large hotel. This is a mission fraught with danger, as they all know that the hotel is populated by numerous zombies. The four main heroes of the story, Jenni, Katie, Juan and Travis, are part of the teams assigned to clear out the hotel. What follows is an unbearably tense piece of story-telling as the clearance teams search the hotel room by room and floor by floor. Not everyone makes it through alive.
Afterwards, Katie declares her love for Travis. She had been in a lesbian relationship, but when her former wife was killed by zombies on day one of the outbreak she thought she'd never love again, especially with a man. But it turns out she was actually bisexual and in a world with so much death and horror all around her, she came to the realisation that she needed Travis as much as he needed her. Ah, sweet!
Jenni and Juan had already hooked up in book one and their relationship continues to blossom in book two. What I particularly like about this series is just how well rounded the characters are. You can see character development in all of the cast, not just the four leads. When one of the supporting cast is killed it does have an emotional impact on you because these are people you care about.
The latter half of the book is taken up with dealing with the threat from bandit raiders, who strike at some of the smaller enclaves of survivors nearby to kill the menfolk and capture the females for sexual gratification and to loot the places for essential supplies. When the bandits turn their attention to Ashley Oaks, the defenders decide to fight fire with fire.
There are a couple of sub-plots worthy of mention. The town's mayor is forced to resign on the grounds of ill health and Travis is one of the two nominations put forward for the vacant post. He doesn't want the job but many feel he is the right man to become the new mayor. A second sub-plot, which remains unresolved, involves an unknown vigilante in the town who kills anyone deemed undesirable to the town's population - drug dealers and rapists, for example, get their comeuppance at his (or is it her?) hands. No doubt we'll learn his or her identity in book three. I have my own suspicion of who the vigilante is but I'll keep it to myself for now.
I mentioned in my review of The First Days the old lady called Nerit, who used to be a sniper with the Israeli Army. She really makes her presence felt in this novel as she is promoted to the town's defence chief. Her tactics for dealing with the bandit raiders are brutal but devastatingly effective. Don't mess with this old lady!
Those of you who have read book one will surely need no urging to buy this book. If you haven't read either, I can highly recommend this series to you. The story moves along at a rapid pace. It is tense, exciting, funny, harrowing and an absolute joy to read. The book retails for $14.99 or for £9.59. I bought my copy from Amazon for £8.74. it's where I buy nearly all of my books nowadays. Book three, Siege, is due for release in April 2012. I can't wait!
Posted by Vampifan at 11:30