As promised on Sunday, here is part two of my review of my World Works Games 28mm scale Mayhem City Police Station. This time, I'll concentrate on the ground floor interior. 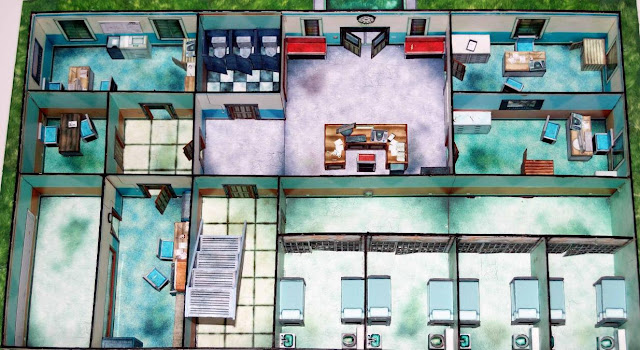 This is the overhead view that I left you with last time as a teaser shot. Well, no more teasing. I'll tell you what each of the rooms represents, starting in the top right hand corner and moving around clockwise. First up is a detective's office, followed by a second detective's office. Next is the corridor to the cells. There are four cells, and each one can hold four prisoners. Next, we come to the corridor leading to the rear exit and to the stairs to the first floor. The processing room and identity parade room are side by side. Above them are an interrogation room and a connecting room, which leads to four other rooms. In the top left hand corner is a third detective's office, next to the public toilets and the entrance hall. 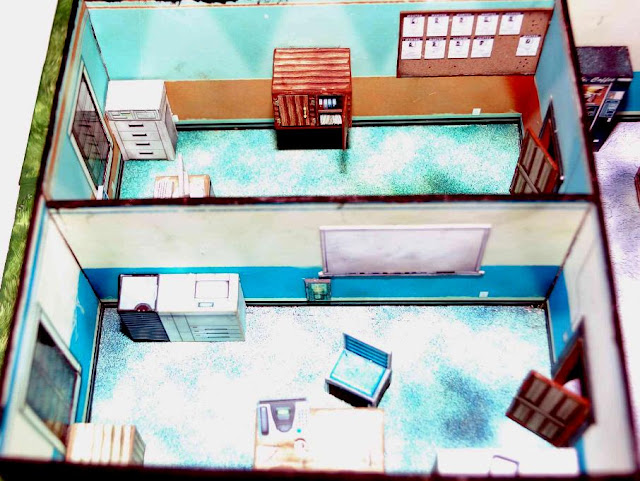 Let's take a closer look at the rooms, starting with the pair of detective's offices next to each other. Against the far wall of the office at the top of this photo are a filing cabinet with a computer on top of it, a wall-mounted bookcase and a selection of wanted posters hanging on a wall board. The far wall of the lower office shows a photocopier machine, a fire extinguisher and a large wipe-board. 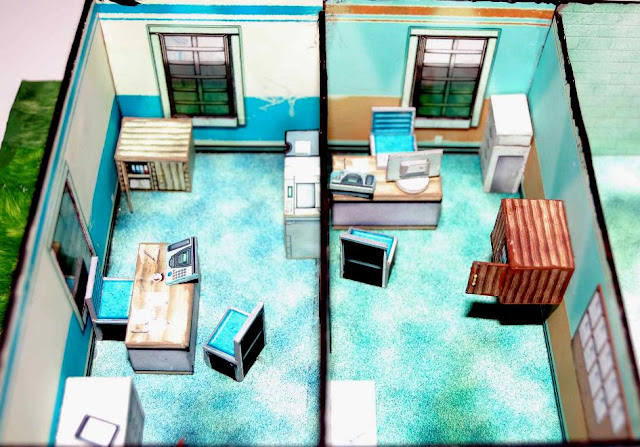 I did not want each office to look the same, so I rearranged the placement of the furniture in them, even though they all contain common elements. Both have their desks behind a window but due to the placement of the windows the desks are at ninety degrees to each other. 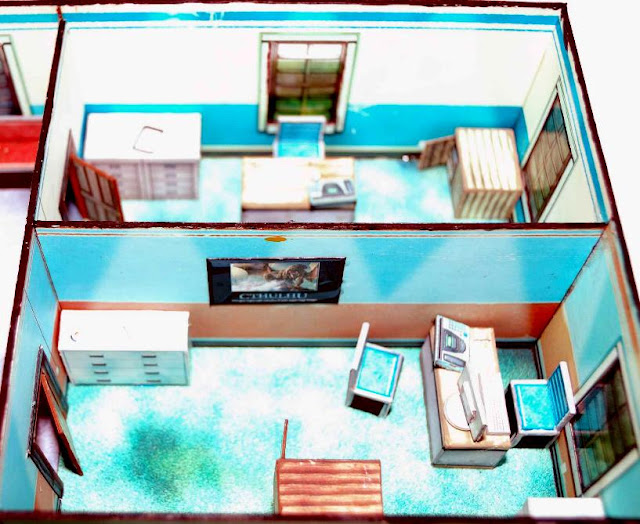 Against the far wall of the office at the top of this photo are a filing cabinet from my Mayhem Industrial set and a bookcase, which this time, I have placed on the floor. As in part one of my review, all furniture items came from the Mayhem Police set, unless I note otherwise. The far wall of the office at the bottom of the above photo shows a large filing cabinet in the corner and on the wall, a poster of Great Cthulhu. Apparently, he has been linked to a number of ritualistic murders. Police advise the public not to approach him! 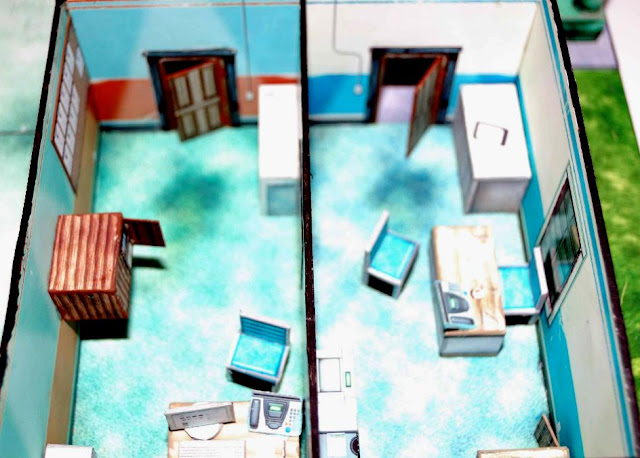 This photo gives a good overview of the layout of both rooms. They each measure 6" by 3". Nothing more to say, so move along now. 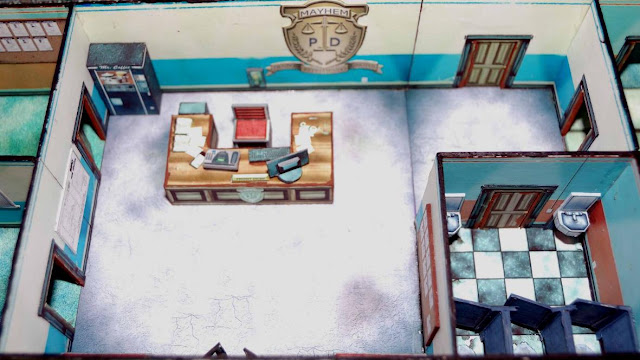 The entrance hall is the second largest room in the building (after the first floor squad room). It measures 9" by 6" but loses a 3" square for the toilets at the bottom right of the above photo. The giant shield mounted on the far wall lets visitors know in no uncertain terms that this is a police station. In the public toilets, the checkered floor came from the TLX Mayhem Armoury set. The two wash basins in the toilets are from the Ebbles Ambient Elements - Barracks set. 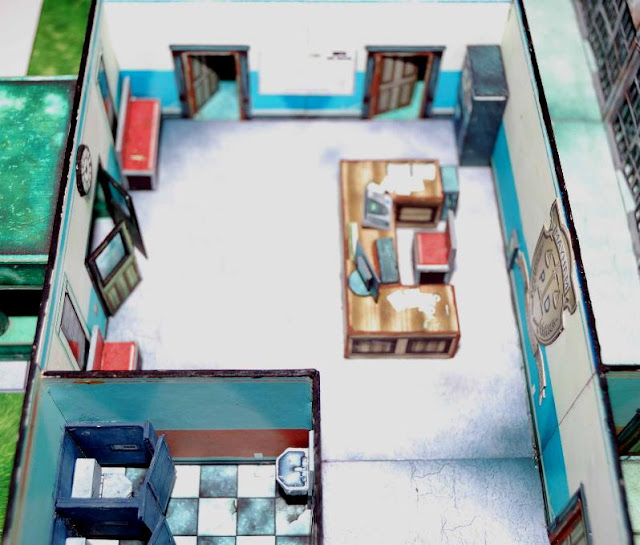 You can see that the room is dominated by the huge reception desk, upon which I have placed a computer keyboard and monitor, and a telephone unit. The computer stack stands off to one side of the desk, near the coffee dispensing machine. 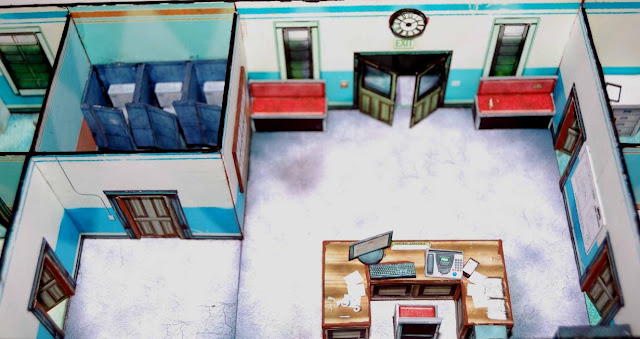 I cut out the clock from the entrance wall, glued it to mounting card then stuck it back in place. This gives it a 3D effect, as it sits away from the wall. The two red leather seats either side of the main doors are for the comfort of waiting visitors. The three toilet cubicles came from the same Ebbles set as the wash basins. I suspect that Mel Ebbles aka Christopher Roe never envisaged anyone making them with open and closing doors. But I did, and whilst I realise that the doors should open inwards that was physically impossible and so I had to compromise and make them open outwards. 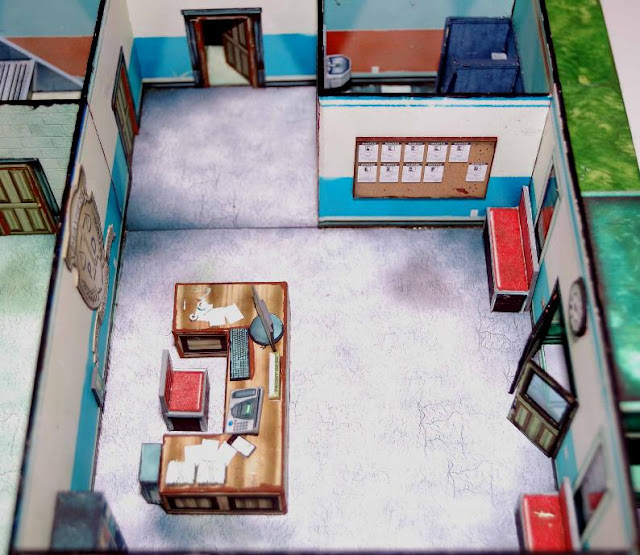 The short wall by the toilets shows an array of wanted posters, pinned to a board. 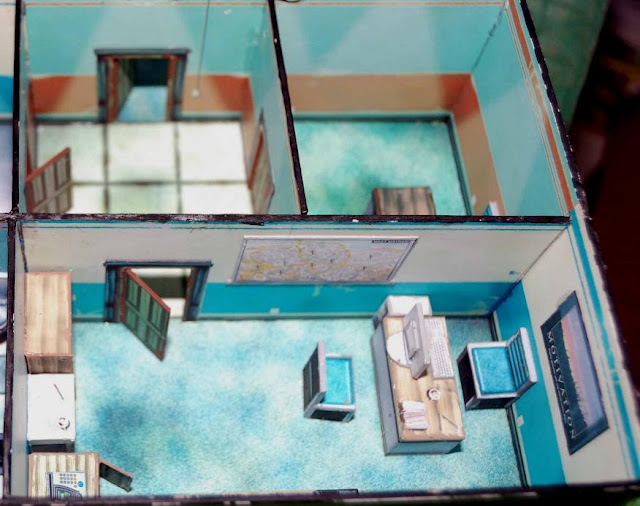 Moving ever onwards, we come to a small connecting room with a door in each wall, a small interrogation room and the third detective's office to be found on this floor. 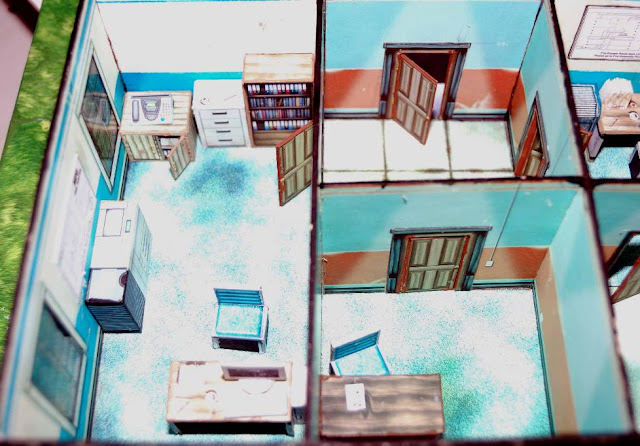 At the top of the picture, in the detective's office are a bookcase with a telephone unit on it, a small filing cabinet and a taller bookcase. 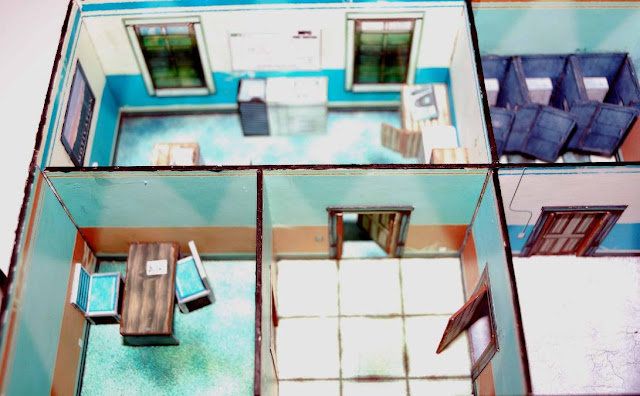 As you'd expect, the interrogation room is very spartan, containing nothing more than a desk and two chairs. In between the two front windows of the detective's office is a photocopier machine. 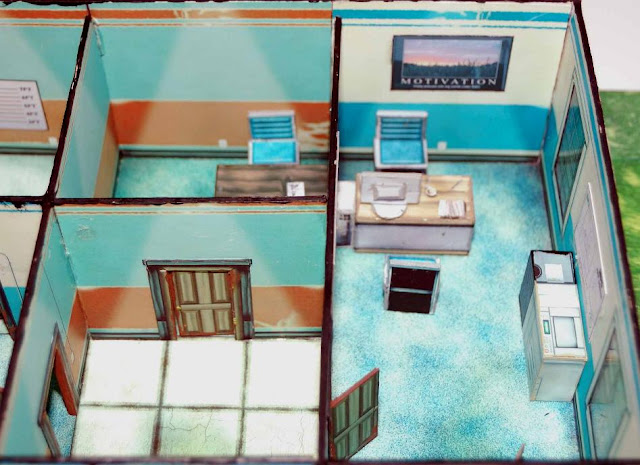 In the detective's office, a computer keyboard and monitor take up half of the desk. The computer tower sits at the side of the desk next to the wall. I added a motivational poster to the wall behind the desk. 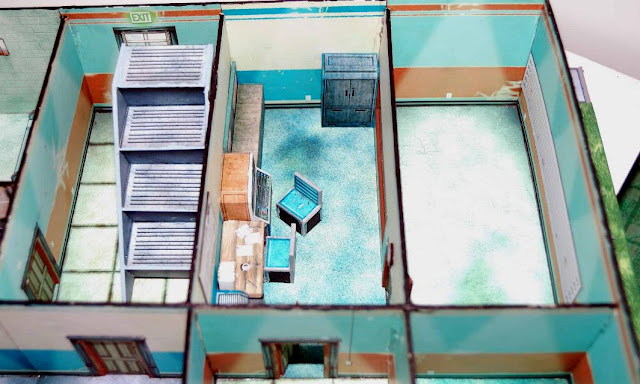 From left to right in this photo are the stairs to the first floor, the processing room, where suspects are photographed, finger-printed and their details entered into the computer. At the far right is the identity parade line-up room. Against the far wall of the processing room is a storage locker from the Ebbles Ambient Elements Workshop set. 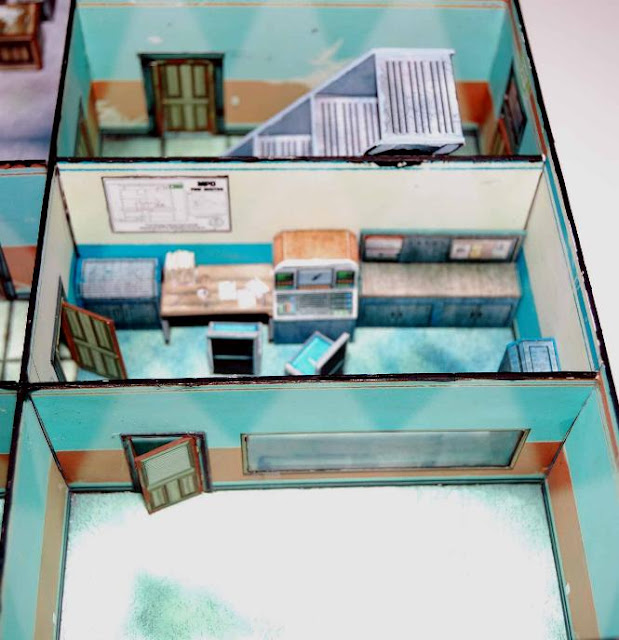 The identity parade room contains no furniture. Its two-way mirror is actually a window printed onto transparency paper. In the processing room, the desk and chairs are from the WWG Police set but the other items come from the Ebbles Ambient Elements Workshop set. In the upper left corner is a filing cabinet. In the centre is a computer terminal and in the upper right corner is a workbench. 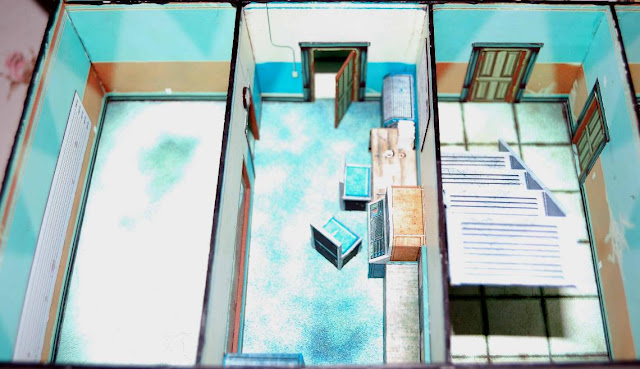 I'm not exactly sure what a processing room should look like but this set-up looks fine to me and I'm not going to change it now. 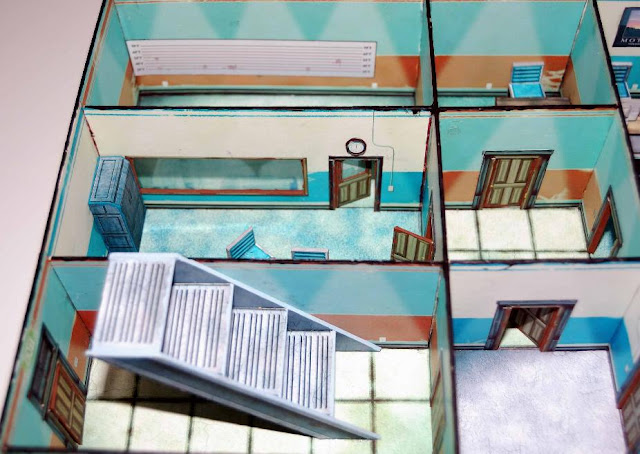 Against the far wall of the identity parade room is a height chart stuck to the wall to measure how tall the "usual suspects" are. It can also be used to photograph single suspects against it.

Finally, we come to my cell block. These are the holding cells to retain prisoners before they are transferred to a more secure prison facility. I normally reinforce my walls with mounting board, but I knew that if I did that with the "metal" bars, it would make cutting out the holes a majorly difficult task. So, instead, I reinforced the inner and outer printouts with thin card. The upper walls above the bars are reinforced with mounting board. Even so, cutting out 192 holes was a complete chore. The walls between each cell could also be made of bars but I thought, sod that, and made them brick walls instead! 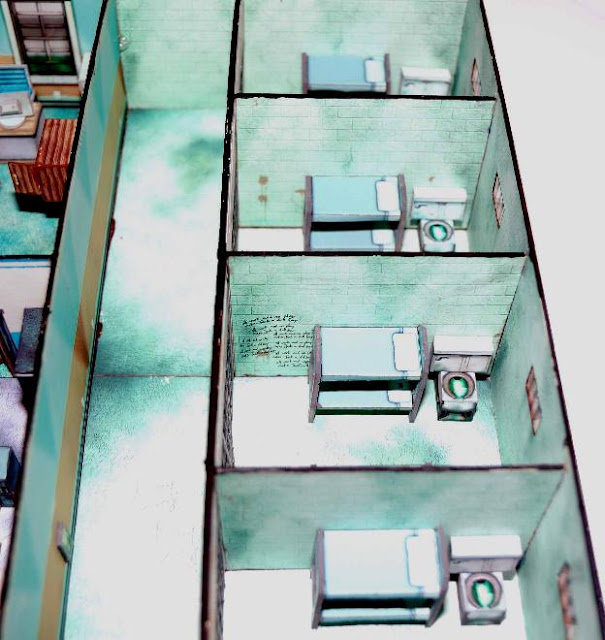 The eight double bunk beds that occupy the cells came from the Ebbles Ambient Elements Barracks set. The beds that come with the WWG Mayhem Police set are good, but they are only single beds and I wanted my cells to hold twice as many prisoners, which is why I chose the double bunks.

Each cell contains one toilet and one sink unit. The cells measure 4" by 3" each and the corridor leading to them measures 12" by 2". 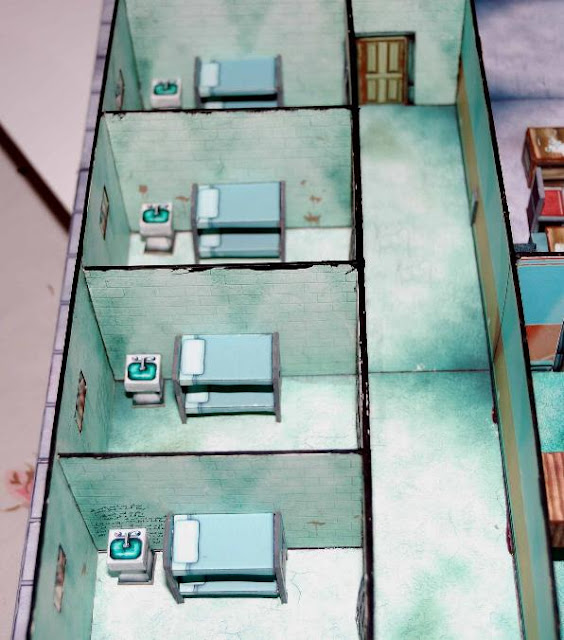 Many of the cell walls are covered in graffiti, which I like. There was no way that I wanted my cells to look pristine and clean.
And that concludes my tour of my police station. Hopefully, it may inspire you to have a go at making one yourself, but be warned this is not a project for the faint-hearted or novice. The amount of work I put into this project was staggering but I think the end result was worth it. It is a building that I am immensely proud of and I'd like to thank everyone who has left a comment for your kind words.
Posted by Vampifan at 11:57