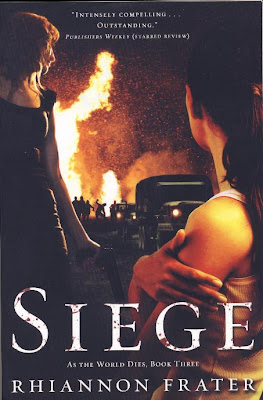 At the start of 2012 there were two books that I was desperate to read and both were part three of a trilogy. Top of that list was Blackout by Mira Grant (which I'm happy to say I am currently reading.) In second place, but not by much, was Siege by Rhiannon Frater. Siege is the third and final part of her As The World Dies trilogy and was released a couple of months ago. Was it worth the wait? Absolutely. I'll go into greater detail on my thoughts about the novel towards the end of this review. But first, the plot.
For our two heroines of the story, Katie and Jenni, life goes on in the small, but well fortified town of Ashley Oaks, Texas. Katie has married Travis and is pregnant with his child. Jenni, along with her stepson, Jason, pet dog, Jack, and her new love, Juan (that's a lot of names beginning with the letter "J"!) have become a family.
Travis is the newly elected mayor of Ashley Oaks but not all of the inhabitants of the town agree with his policies, especially snobbish socialite, Blanche. She goes completely off the rails and shoots Juan. This forces Travis to send out a snatch squad to acquire medical supplies to help save his buddy's life. Jenni insists on being part of the team that sets out to a hospital not too far away. Inevitably the hospital is overrun by zombies and the team suffers casualties. A couple of them make it back home but not Jenni and Bill. Instead they are captured by a military contingent based at the Madison Mall shopping complex. The mall is home to a large group of survivors, a small military force and a power-hungry U.S. senator, who treats the mall survivors like slaves. She desperately wants to take over Ashley Oaks, so that she can use it to offer as a trophy to the president of the United States, who is apparently still alive and holed up in a secure location.
What the senator fails to realise is that not all of the military under the command of her lover, Major General Knox agree with her. When a small force led by Lieutenat Kevin Reynolds take a helicopter flight to Ashley Oaks to offer a deal with the townsfolk, what he sees there makes him realise he should support Travis and not the senator. He returns to the mall with Travis, Katie and a few others and they persuade all of the mall survivors and most of the soldiers that a better life awaits them at Ashley Oaks. I shall stop here with my precis as to carry on would be to give away too much. Suffice to say, quite a few folk do make it back to Ashley Oaks but not everyone. The siege mentioned in the title of the book occurs at the end of the novel and it involves a zombie meta-horde moving slowly but relentlessly towards Ashley Oaks. Now I should point out that this is just the start of a meta-horde, numbering between ten to twenty thousand. Small by the standards of the meta-hordes I mentioned in a previous post but still overwhelming for the populace of Ashley Oaks, who number about three to four hundred.
Siege is a book that pulls no punches. Be warned that a lot of good people who you really care about get killed, along with some who deserve to die. One person who does come to a sticky end is the mysterious Vigilante, whom I correctly identified in the last novel, even though his true identity is not revealed until late on in Siege. Yay me! What ultimately makes this such a great novel are the characters, who by now, are well rounded and defined with their own unique traits and quirks. When one of them does die, you feel for their passing.
Perhaps controversally, Rhiannon introduces a new supernatural element to this novel - ghosts. Some folk may baulk at this but not me. If zombies can exist, why can't ghosts? Besides which, the ghosts are there to help the living. They may be dead but they sure don't want their loved ones to end up like them. At times their appearance can seem like a deus ex machina but I was so wrapped up in the story by then that I didn't care.
Rhiannon's love and affection of the zombie genre shines throughout. Just witness her George Romero references when Jenni first sees the shopping mall surrounded by a horde of zombies. Volume three brought the trilogy to a very satisfying conclusion. Siege is primarily a story about people. It's about love, heroism and selflessness in the face of adversity. It's about overcoming a crisis despite the chaos of a world going to hell. I enjoyed it immensely and I'll give it a well-deserved 9 out of 10 rating. This is a trilogy that deserves to be on the bookshelves of any fan of zombie literature.
Posted by Vampifan at 11:56