The Vengeance of the Vampire Bride by Rhiannon Frater 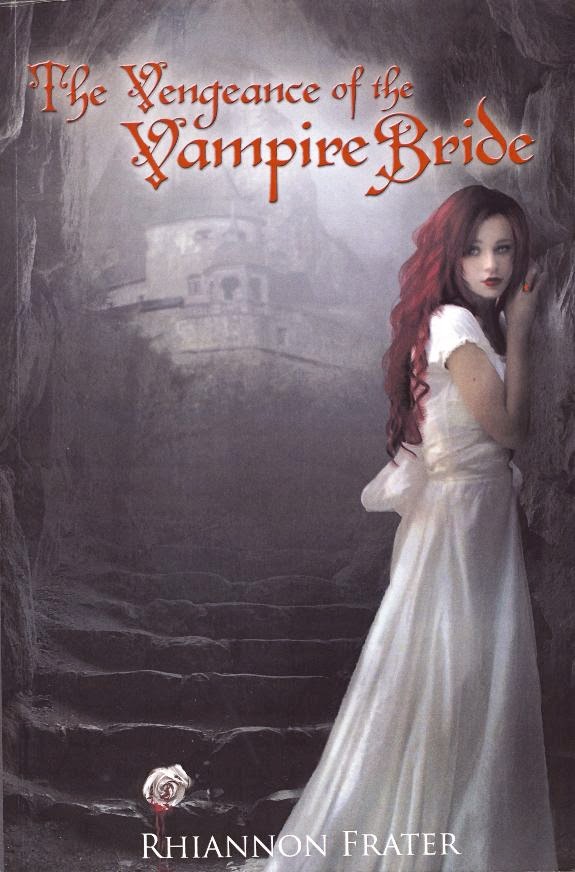 The Vengeance of the Vampire Bride is Rhiannon Frater's sequel to The Tale of the Vampire Bride, which I reviewed last time. The blurb on the back cover of the book describes the novel thus -
"In The Tale of the Vampire Bride, Lady Glynis suffered great horrors at the hands of her evil vampire master, Count Vlad Dracula, and vowed she would one day escape him.
In The Vengeance of the Vampire Bride, Glynis learns to embrace the title of Countess Dracula as she sets in motion her plans to seek revenge on those who betrayed Glynis and her family to Dracula and to reunite with the man she loves.
Despite her ambitions, it soon becomes apparent that her life continues to be overshadowed by the ominous presence of Vlad Dracula.
Set in the 1820's against the lush gothic backdrop of Buda, Hungary, the tale of one vampire bride's quest for love, revenge and the right to determine her own way in life is a sweeping saga that will enthrall any reader who loves the beautiful, deadly vampires of old."
Lady Glynis Wright grows ever more powerful in this sequel. She has some very powerful allies, none more so than her 1000 year old vampire lover, Father Ignatius. He plays a major role in her life. Rhiannon adds numerous supernatural creatures to this story - a fallen angel called Astir, a dhampire called Gregor, and unnamed ghouls. In this sequel we get to learn a lot more about the vampire war that raged in Buda and the murky world of vampire politics. We, the readers, learn all of this, just as Glynis does, slowly and one piece at a time over the course of the novel. Inevitably, Glynis is forced to take sides, but there will be no spoilers from me.
Reading the two books back to back gave me a real pleasure. The writing style changes in volume 2. In volume 1, the story unfolded in a series of letters and journal entries from various characters. This was a device used by Bram Stoker in his iconic Dracula novel, and Rhiannon was clearly influenced by his writing style. In volume 2, the vast majority of the story is told via Glynis's journal entries, so we get less of an insight into the minds of the other characters. Personally, I didn't mind this change of emphasis, after all, Glynis is the heroine of the story and it is only right that she takes centre stage.
She still annoys me by stomping her foot when angered. But that is my only criticism of her as a character. I do like the way she grows ever more powerful and confident in her new life as a vampire.
Rhiannon, once said that her favourite literary couple in the novels she had wrote were Glynis and Ignatius. Much as I like them both, I can't agree with Rhiannon. I much preferred the  vampire lovers Amaliya and Cian from the Pretty When She Dies series, and the lesbian lovers, Jenni and Kate from the As The World Dies series. One thing I wish Rhiannon had done with the Vampire Bride series is to include a pronunciation guide to the names of the characters in the novel. She did this in the Pretty When She Dies novel and I found that very helpful. In the Vampire Bride novels the First Bride of Dracula is called Cneajna. I have no idea how to pronounce her name.
The proofreading issues I made about volume 1, still apply to volume 2. There are a few spelling mistakes and far too many words hyphenated unnecessarily.
I should mention the front covers of the two novels as they both sport beautiful paintings by Claudia McKinney, featuring Megan Young as Lady Glynis. I can't imagine Glynis looking any different. Megan IS Glynis and of the two covers, I prefer the one for volume 2.
I bought the paperback version of this novel from Amazon for £9.05. It is considerably shorter than volume  1, running to 400 pages. Interestingly enough, the Kindle version costs £2.65, which is much dearer than the Kindle version for volume 1, which is much longer. I don't understand how that can be. I liked this novel just as much as volume 1, so I give it a 9 out of 10 rating.
Posted by Vampifan at 11:57