Way back in March 2014 I posted a batrep for a most unusual game - Pillow Fight at St. Trinian's 01. You can find it here - http://vampifansworldoftheundead.blogspot.co.uk/2014/03/pillow-fight-at-st-trinians.html
Last week I received a new comment on the game from Matthew James Barlow, with some interesting suggestions. That got me thinking that a rematch was long overdue. In the first match the Posh Totty team defeated the First Formers' team. Now they face a new challenge from the Emos team.

The game uses the Pillow-a-go-go rules, which are now out of print, but if you are interested in owning them I can e-mail them to you as a PDF. The rules only run to two A4 sized pages plus a page for the bed and counters. The objective of the game is to knock all your opponents off the super-sized bed. Each team of three combatants randomly chooses a pillow for each participant, which have varying effects. They also have three points to distribute amongst the stats of Attack, Defence and Agility for each participant. The game takes place on a giant bed measuring 6" by 6". Movement is 3" on the bed and 4" on the ground. Agility can modify these numbers. 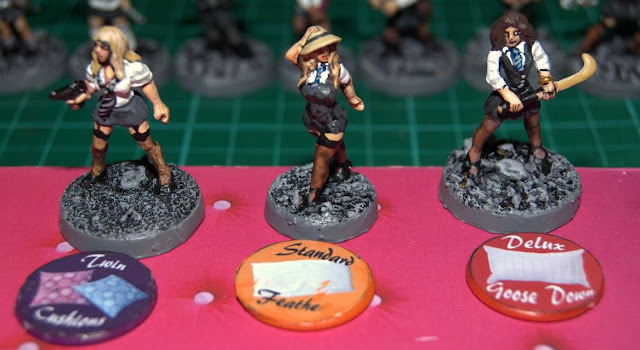 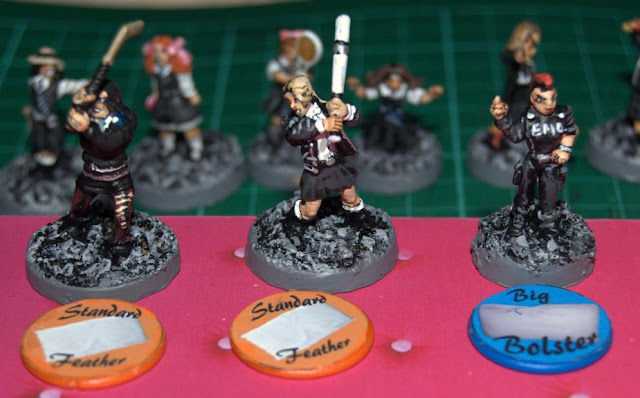 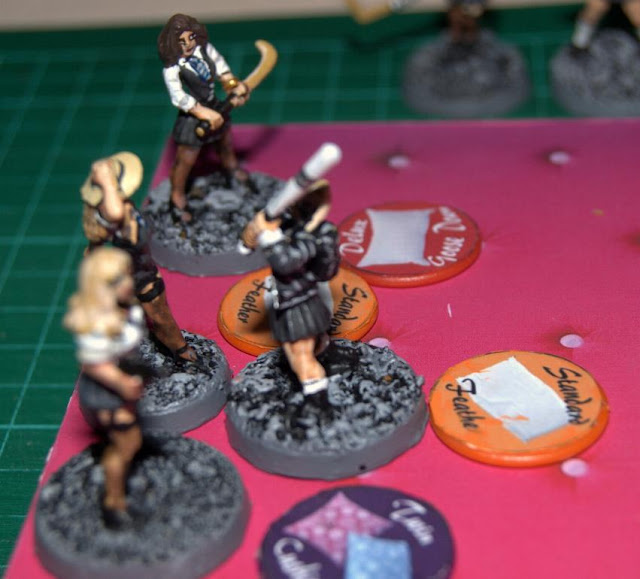 Dorothy. She moves 4" towards Chelsea and attempts a Normal Attack. If successful she'll knock  Chelsea back 1", which will push her off the bed. Both combatants roll 1d6 (using Attack vs Defence) adding any modifiers. Highest result wins and ties go to the defender. The result was E4, P4 (E = Emo, P = Posh), so Chelsea dodges the blow. 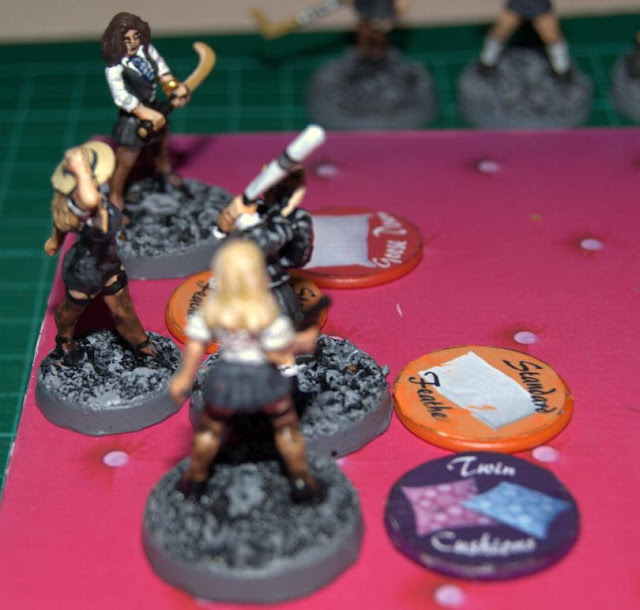 Rachel. She moves 1" to the side of Dorothy and launches a Double Attack with her twin cushions. 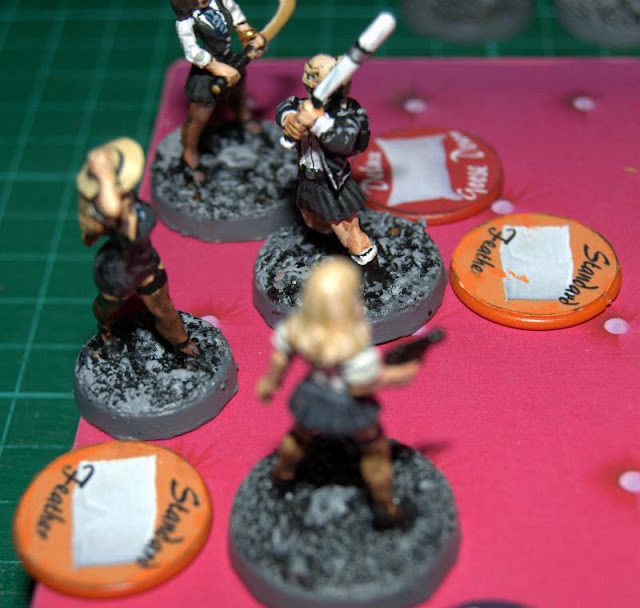 The results are P6, E3 and P3, E4, so one success and one failure. Dorothy is knocked 1" away from Rachel. 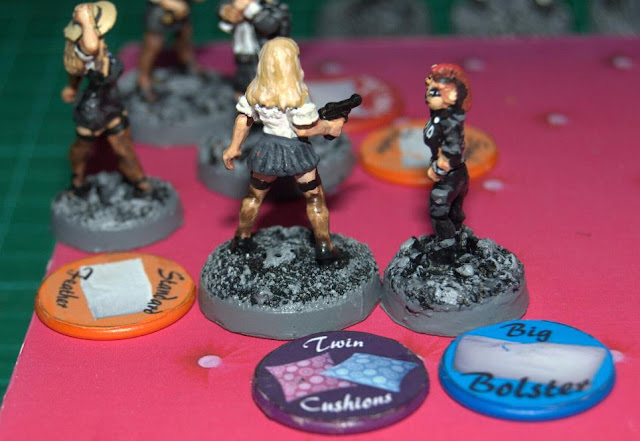 Emily. The young Emo moves 3" towards Rachel and attempts an Over Head Stunner Attack. This is a powerful attack if successful but is not without some risk. Before making this attack, the combatant leaves themselves open to attack. The target of this attack gets a free attack against her opponent before the Over Head Stunner is launched. If this free attack is successful in knocking back the attacker then this attack fails. Modifiers are +1 to hit. Opponent is knocked back 1" (it would actually be 2" because Emily is using the Big Bolster), knocked prone (must spend their next movement to stand up) and Stunned (unable to make any attacks until the next turn) during their next activation. 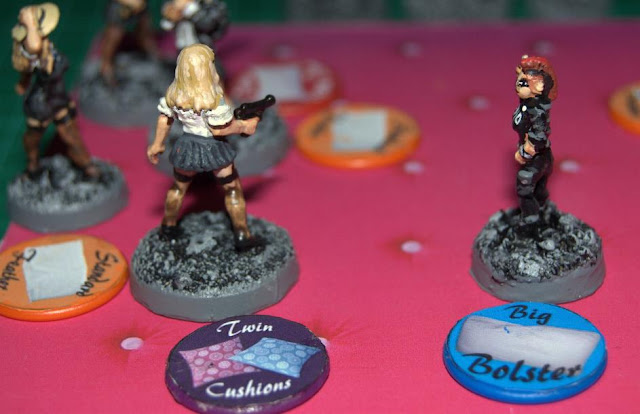 Unfortunately for Emily, Rachel succeeded in her free attack (P5, E4) and so it was Emily who got knocked back 1". This meant she couldn't attempt her Over Head Stunner Attack. 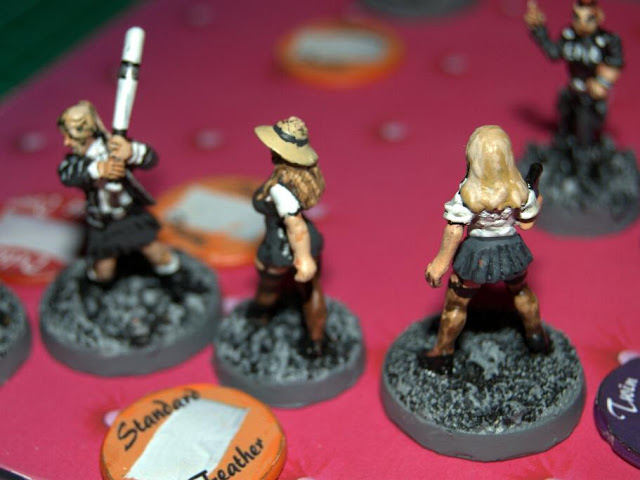 Chelsea. She moves 1" to the side of Dorothy and makes a Normal Attack, which succeeds (P5, E2). Dorothy is knocked back 1", placing her dangerously close to the edge of the bed. 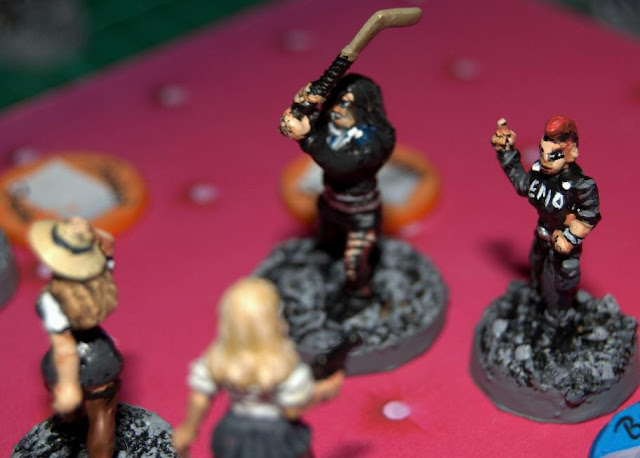 Andrea. She moves 3" towards Chelsea but fails to reach her. This means she loses her chance to make an attack. 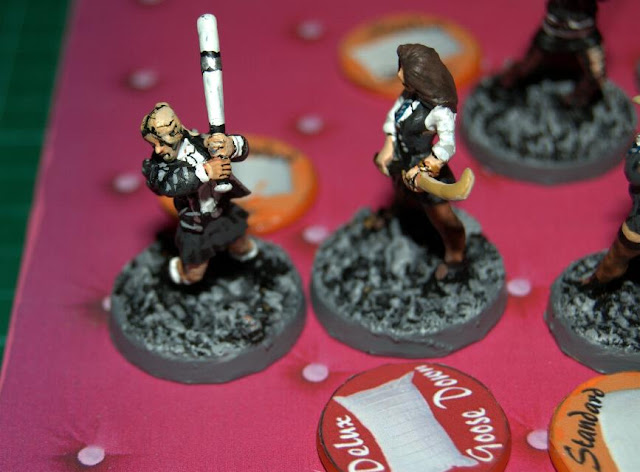 April. She moves 1" to the side of Dorothy and makes a Normal Attack, hoping to knock the Emo off the bed. However, the result is P4, E5, so Dorothy survives.
TURN 2 INITIATIVE - Posh = 4, Emos = 2. 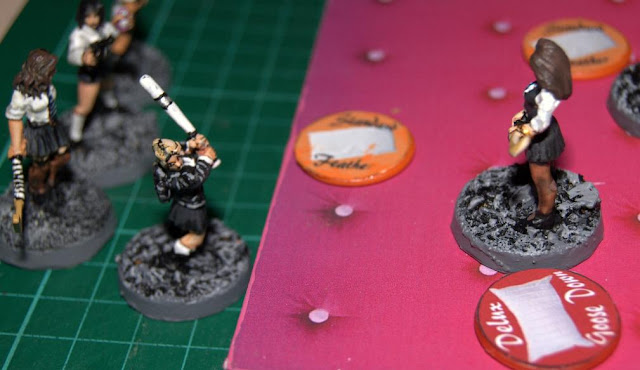 April. There is no need for April to move as she is standing base to base with Dorothy. She makes a second Normal Attack using her Deluxe Goose Down Pillow and this time is successful. With results of P6, E3, Dorothy is knocked back 1", which sends her off the bed. She drops her pillow, which can be picked up by anyone on the bed. First blood goes to the Posh Totty team. 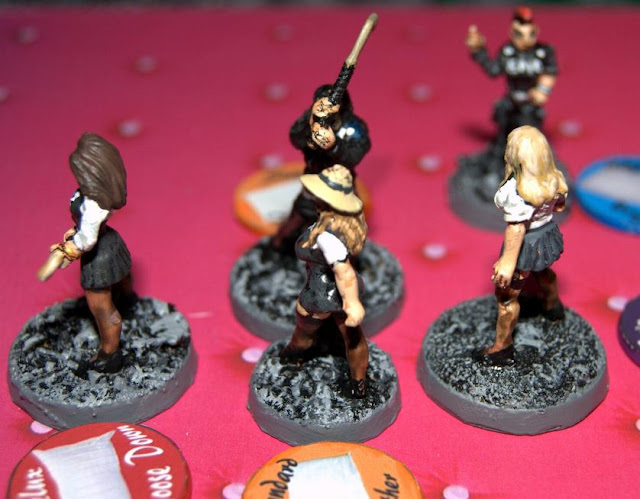 Andrea. She moves 1" towards Chelsea and makes a Normal Attack. With results of E6, P6, the combat is a draw, resulting in no damage. 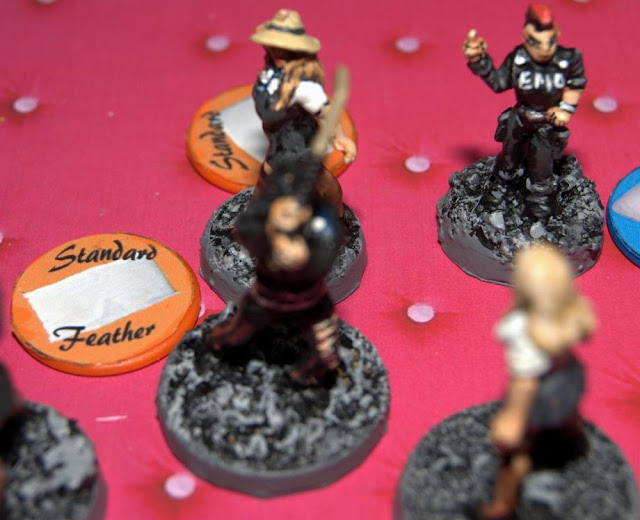 Chelsea. The wily Posh Totty makes use of the bed's springiness and makes a Bounce Attack. By forfeiting her movement, Chelsea is able to make a big bounce up to 2" to threaten Andrea's footing. She must end her bounce in base contact with her opponent. Chelsea spectacularly bounces over Andrea. She suffers a -1 modifier to hit but still succeeds with a result of P6, E4. Andrea is knocked back 1" and knocked prone. Another knock back would see her tumbling off the bed. 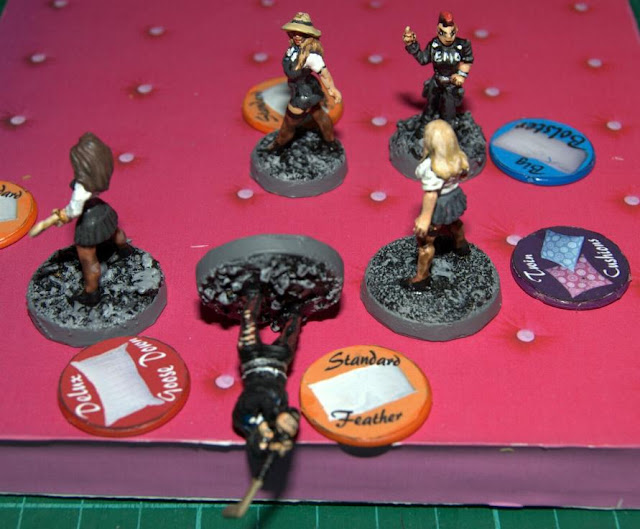 Emily. She forfeits her movement to make a Round House Attack against Chelsea. She suffers a -1 modifier to hit but if successful will knock Chelsea back 3" (2" for the attack plus 1" for using the Big Bolster). Sadly, Emily's bad luck continues and she misses with a result of E3, P4. 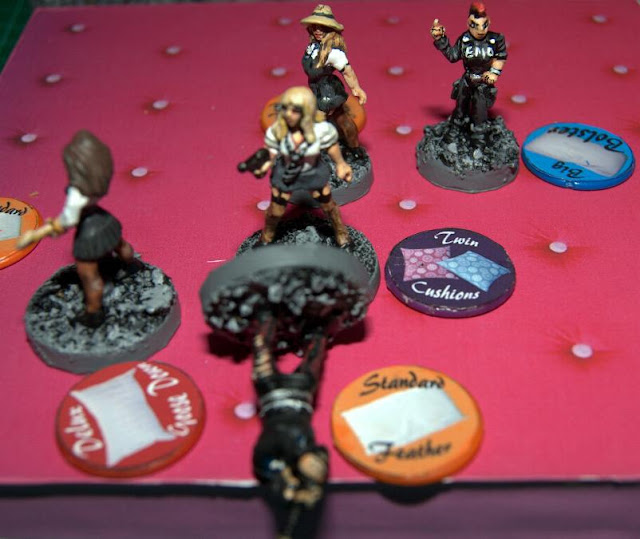 Rachel. Rachel lives up to the St. Trinian's code of combat - always kick an opponent when they're down. She uses her twin cushions to attack the prone Andrea twice. 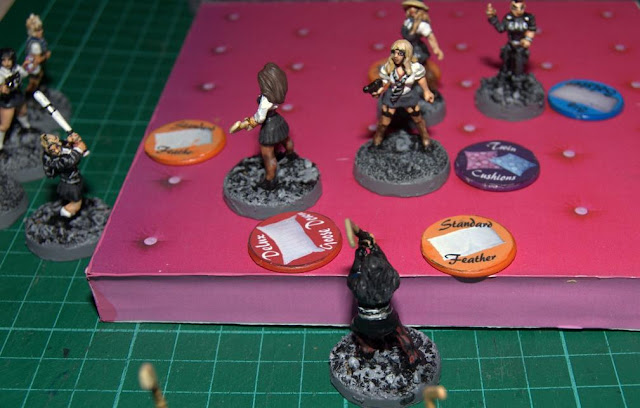 The results are P4, E6 and P6, E3. She only needed one success to knock Andrea off the bed and so the Emos are two girls down. 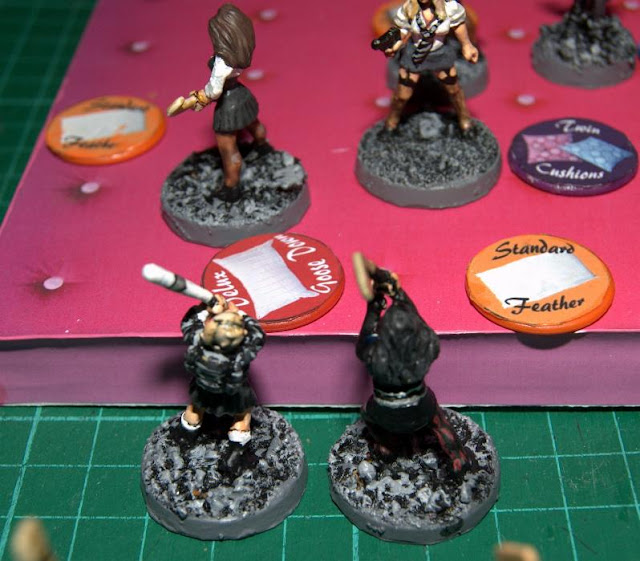 Dorothy. A person knocked off the bed is not allowed to climb back on but they can still make a contribution to the fight. The one and only attack they can make is a Dirty Trick Attack - the Ankle Grab. This has a range of 1" and if successful will knock an opponent prone. Dorothy moves 4" to stand alongside Andrea. She makes an Ankle Grab Attack against April. With the result of E5, P7, April evades the attack.
TURN 3 INITIATIVE - Posh = 5, Emos = 3. 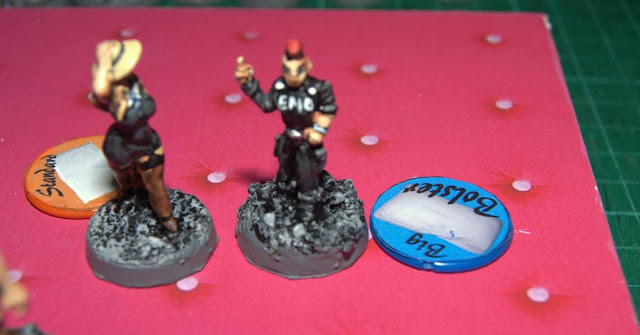 Chelsea. The busty Posh Totty forfeits her movement to make a Round House Attack against Emily. 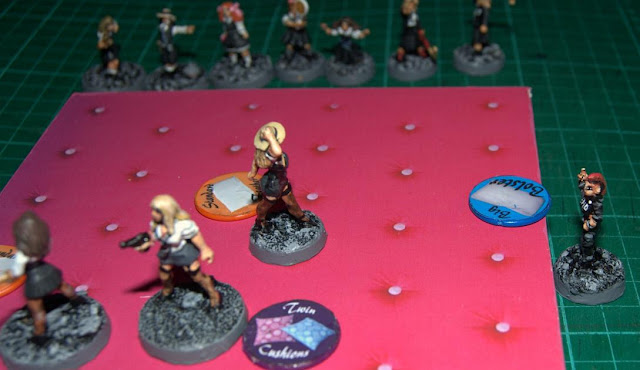 "This is how you do a round house, you little freak!" she screams as she whacks the Emo with a powerful swing. A result of P5, E2 knocks Emily 2" back, sending her reeling off the bed. It was an emphatic victory for the Posh Totty team, making it two wins in a row for them.

That was so much FUN! It only took an hour to play but would have been much quicker if I wasn't making notes and taking photos.
Posted by Vampifan at 09:30