Having previously looked at a few 1970's and 1980's style police detectives I'm now switching my focus to the beat patrolmen from the United Kingdom, or as DCI Gene Hunt so delicately calls them, "the plods!" 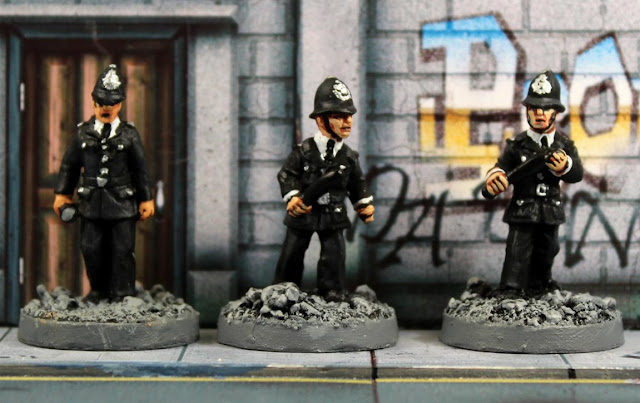 At the far left of the two photos directly above and below here is an unnamed Police Constable from Crooked Dice Games. He is one of three figures from the Coppers set 1. He is holding a torch in his right hand. He comes with a separate helmeted head but you have the option of using alternative heads for him, the most obvious choice being the peaked cap version. I was quite happy to leave him with his helmeted head. On the CDG webstore he is available to buy with a police dog for £4.50 for them both. I've painted the dog but I'll show it later. 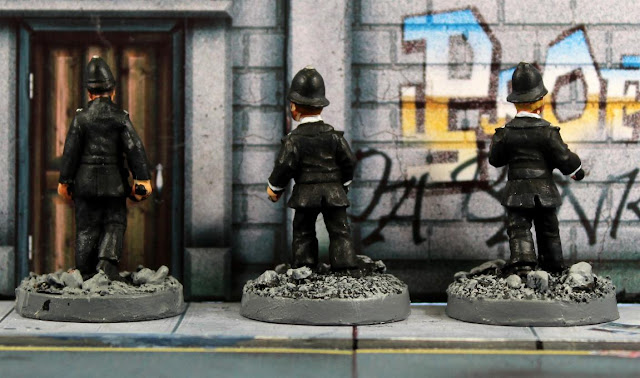 The other two Police Constables are made by Killer B Games. In the centre is KB-032 British Bobby Advancing and at far right is KB-031 British Bobby Tapping Truncheon. Unlike the CDG coppers, these are all one-piece castings. They cost £2.00 each. 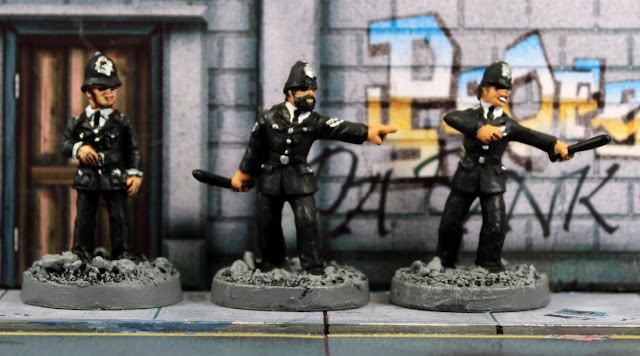 Moving on, at the far left is another Police Constable made by Killer B Games. He is KB-033 British Bobby Standing. He also costs £2.00. I haven't named any of my Police Constables yet, but I'm sure I will once I get round to using them in a batrep.
The two remaining policemen are from Crooked Dice Games. In the centre is Police Sergeant Tony Sykes (I figured he deserved a name because of his rank). He is easily identifiable by his bushy beard and, of course, by his sergeant's stripes. He is part of the Coppers set 2 and he costs £3.25. He comes with the separate bearded, helmeted head. 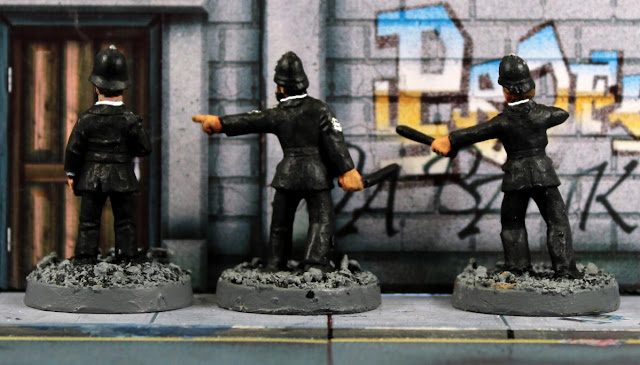 Finally, is a Police Constable from CDG's Coppers set 1 and he is known as Copper with Whistle. The whistle is held in his right hand. He also costs £3.25.
All of these will be used as Extras in upcoming games of 7TV2e. All are very nicely sculpted and are worth having if you want to use UK bobbies on the beat in any of your games. Next time I'll be reviewing yet more bobbies on the beat from Crooked Dice Games and Killer B Games.
Posted by Vampifan at 10:11