So, it's June and that means it's time for the Forgotten Heroes challenge, which is run by fellow bloggers, Jez and Roger. I very nearly gave it a miss this year because the figure I was planning on converting (a Twilight Knight) by Soda Pop Miniatures into a Chibi Lady Death was discontinued earlier this year before I could buy her. But having greatly enjoyed the challenge last year, I decided to take a totally different tack and a one that no one could possibly envisage.

I'm currently heavily into sci-fi gaming. So I have decided to make a couple of 28mm scale sci-fi figures. Yes, make them. They will not be conversions but rather will be sculpted by me from scratch. The two figures I'm going to make are the two human heroes from the old comic strip, The Bug Hunters, Melissa Ravenflame and Jackson T. Kalliber. Already I can hear everyone saying, "Huh! The Bug Hunters? Never heard of them!" Understandable! Let me give you some background info on them taken from the Comics Corner section of the Weird Retro website. 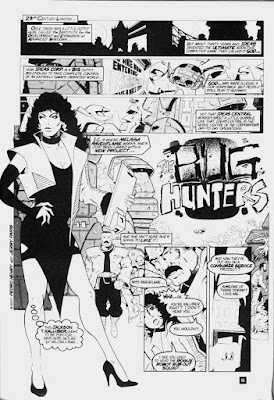 "Back in October 1985 a serialised comic began to appear in the pages in Computer and Video Games (C+VG) magazine. The series ran almost every month until February 1987. For any teenage computer geek growing up in the 80s, C+VG was the must buy computing and gaming magazine, and the addition of The Bug Hunters only made the magazine all the more worth buying. The sight of Melissa Ravenflame on that first panel, set many an adolescent comic book/computer geek's heart a flutter. (As sad as that is!) See the picture to the left.

The Bug Hunters was scripted by Jerry Paris, whose early work was for Marvel UK on titles such as Freefall Warriors; drawn by Pedro Henry (the pseudonym of renowned British comic book artist, Steve Moore), who gave Alan Moore his leg-up as a comic book artist; and inked by Garry Leach, who worked on the seminal British comic book 2000 AD, and also collaborated with Alan Moore. Both Steve Moore and Garry Leach worked on the regular feature in 2000 AD Tharg's Future Shocks. During the period of The Bug Hunters appearing in C+VG, Leach also worked on Judge Dredd. For a comic strip series appearing in a computing magazine, The Bug Hunters was exquisitely pencilled by Paris and inked by Leach, creating some of the most memorable images of comic book art in the mid-80s UK.

Computer and Video Games was first published in November 1981, and was the world's first dedicated video gaming magazine. The first issue featured an article on the arcade game Space Invaders. The magazine ceased appearing in a printed format in 2004, but continues as an online magazine format as it has since 1999. In the 1980s, C+VG was the multi-format magazine of choice for all gamers and computer geeks. It featured news, reviews, as well as hints, tips, game maps and long list of programming code for readers to laboriously type into their home computers to create games. 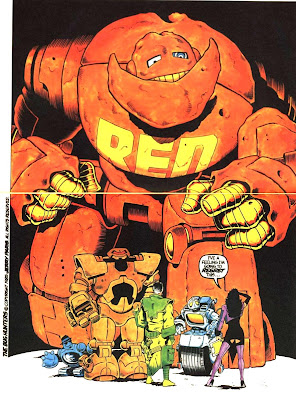 However, in 1985 when The Bug Hunters first appeared it was a shift for the magazine, as they used the images and characters from the comic series to promote various sections of the magazine. Set in 23rd Century London, the aforementioned Melissa Ravenflame was working on a new project for IDEAS Corp. (Institute for the Development and Expansion of Advanced Systems). Three years earlier they had created the most addictive computer game ever, called GOD. She teams up with Jackson T. Kalliber, an ex-military man who looks like a cross between Burt Reynolds and Charles Bronson. He's put a team together of robots, that include OTISS (Overt Technical Information Suburban System), Big Red (Relocation of Explosives for Demolition), B-Con a security droid who helped with a prison break, and X a "fascism" droid who can pirate anything. Thus a rag-tag team of robots.

Over their time in C+VG, The Bug Hunters went through a darkly comic series of adventures. Beautifully illustrated, told with a quintessentially British sense of humour. An almost forgotten gem of a comic book series, that stands as an example of the genius of comic book artists working in the UK at the time. Especially those that went through the 2000 AD stables. It was one of the greatest multi-serialised story, multi-artist comic books in the world."

I'm just happy that due to copies of C+VG now being in the public domain on www.archive.org I was able to download all 15 episodes of this series to keep as a permanent reminder of one of my secret pleasures of the 1980's. My brother used to subscribe to C+VG and whilst I had no interest in computer gaming (I still don't) I absolutely adored The Bug Hunters comic series.

So, I plan on making Melissa Ravenflame and Jackson T. Kalliber as my entries for this year's challenge. I would love to make/convert the four robots but that can keep for another day. Perhaps they might be next year's challenge.
Posted by Vampifan at 08:07