MC1 Perps - The Brotherhood of the Sump

As I gear up to prepare for my next Judge Dredd Miniatures Game scenario, I thought I'd show you an old street gang of mine that I made many years ago. These are the Brotherhood of the Sump - part cultists, part toxic waste survivors and all round bad asses. The sump in their title refers to the devastated area of Mega City One they come from - a bombed out wasteland known as Sumptown - and has nothing to do with the late Otto Sump. It is one of the many slum areas of MC1 still waiting to be redeveloped.

At the left of the photo above is the leader of the gang - Father Mephisto - a Level 4 Punk Infantry Hero. He is armed with a Laser Rifle and a Knife. He has five Talents - Accurate, Brave, Luck of Grud, Skilled and Deadly and Voice of Command. He costs 245 Credits. All Brotherhood of the Sump gangers are equipped with Respirators and Rad-Robes, which offers a lowly +1 armour protection and helps them avoid radiation sickness. Rad-Robes cost 5 Credits and are something I added to the game. 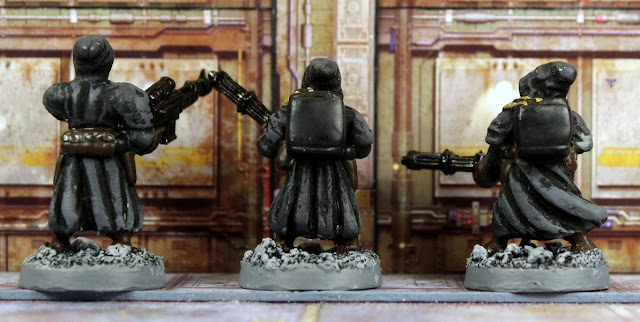 Next up are the gang's two heavy weapons specialists - Dagoth and Gorath. They are both Level:2 Punk Infantry Heroes and they have identical weapons and stats. They armed with Heavy Spit Guns and they have three Talents - Brave, Maximum Firepower and On Their Knees. They cost 195 Credits each.

The rank and file footsloggers of the gang are these four Level:1 Punk Infantry Heroes. From left to right are Ikthalon, Zallatou, Kierrok and Karathos.

They, too, have identical weapons and stats. They are all armed with Long Rifles and their two Talents are Aim and Brave. They each cost 115 Credits. 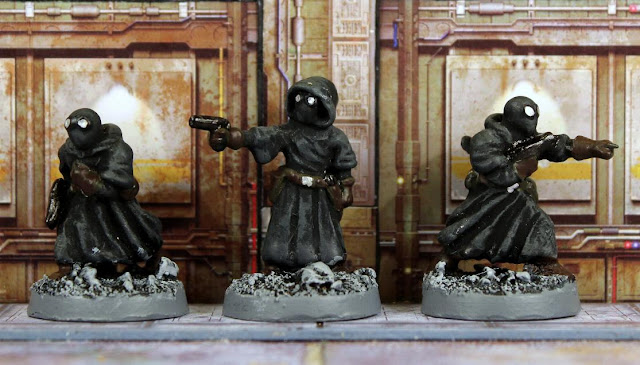 Finally, are three Level 0 Punk Minions, named from left to right as Ikonn, Belthauzer and Shumal. Note that there are no Juves in this gang, only Punks. 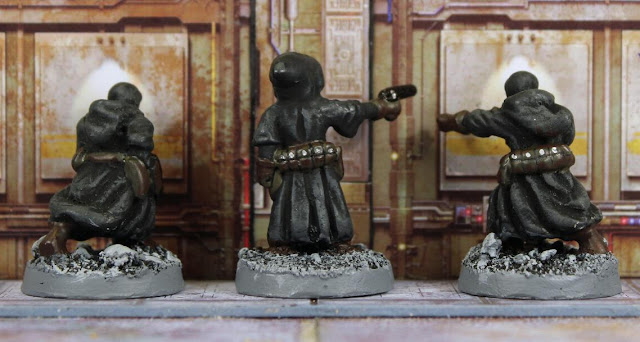 They are armed with Handgun Pistols and they cost 55 Credits each. The gang has a total rating of 1,260 Credits. 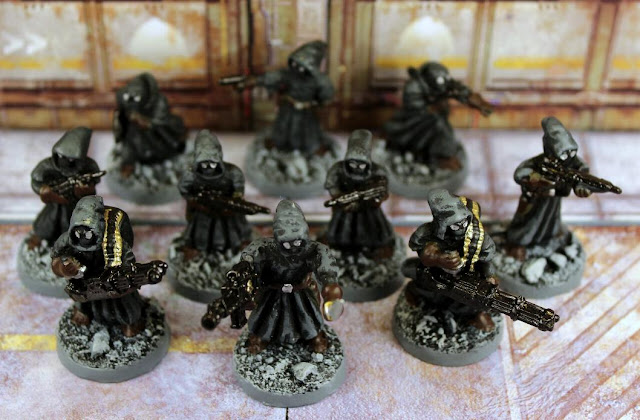 All of these figures were sculpted by me around about 1990. They are based on the Cultist Gang shown below, who were a set of 20mm scale figures produced by Games Workshop for the Dark Future game - their version of Car Wars, also set in a near future post apocalyptic world. Dark Future came out in 1988. GW produced some really cool figures for this range but the fact that they were 20mm scale really irked me. Yes, they fit in well with Matchbox and Hot Wheels cars, but I wish they'd produced them in 28mm scale. At that time, I made quite a few 28mm scale copies of the figures from this range. For this gang, I also added some new sculpts of my own, most notably, the leader, Father Mephisto, whose Laser Rifle came from a plastic House Goliath ganger from the original Necromunda game.

This photo was taken from the Internet and is included just to show you how close my copies are to the original sculpts.
Posted by Vampifan at 09:38