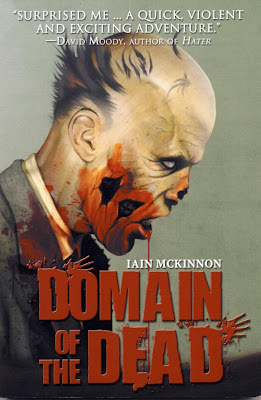 I've never reviewed two books at once before but in this instance the decision to is fully justified. Once again, we're in zombie apocalypse territory. This time the story is set three years after the outbreak began. Domain of the Dead, which is the first in this mini-series, opens with a small group of survivors holed up in a large food warehouse, where they have remained throughout the apocalypse. They are surrounded by a vast horde of flesh-eating zombies and they have almost run out of food. The heroine of the novel, Sarah, is contemplating suicide, when she hears an unfamiliar sound. A helicopter has appeared and landed in their city, not far away from their location. She persuades the others in her party that their best hope of salvation is to make contact with the occupants of the helicopter. As they fight their way through the zombie horde some of them don't make it. Those that do find a small team of five military personnel. The soldiers are friendly and offer to help transport the survivors away from the zombie-infested city. But there is one big problem - the helicopter has a very limited passenger capacity and will only hold four passengers - five if a child sits on the lap of an adult. One of the soldiers, Bates, refuses to give up his seat. Another soldier, Angel, a female sniper was wounded and she had to return for medical attention. That left two seats. Sarah, her friend Nathan and young child, Jennifer are chosen to ride in the chopper.
It takes them to a research ship miles out at sea. The ship's doctor gives them a thorough examination and explains what has been going on in the world during the past three years. Humanity is surviving but the zombies vastly outnumber the living. They are introduced to the ship's captain and to the chief scientist, Cutler, who don't see eye to eye. Here we have a situation inspired by Romero's film Day of the Dead with the captain and scientist at loggerheads. Heck, the captain even calls the scientist "Dr. Frankenstein" just as Captain Rhodes did with Professor Logan in Day of the Dead.
On that very day when the newcomers arrive, Cutler makes a scientific breakthrough in finding a cure for the zombie disease. However, it proves to be anything but and when he injects himself with it, he soon turns into a zombie. In no time at all the ship is overrun with zombies, leaving just Sarah, Nathan, Jennifer and the two soldiers from the helicopter, Bates and Angel to fend for themselves in a desperate situation. 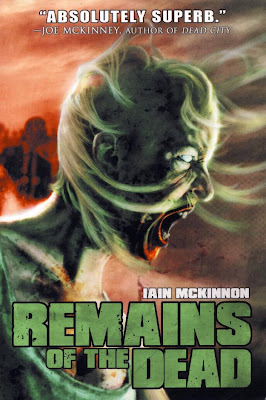 The sequel, Remains of the Dead, tells the story of the two soldiers, Lieutenant Cahz and Cannon the machine gunner, who were left behind with survivors Ryan, Elspeth and a baby girl. Another survivor, Ali, is separated from them but he manages to survive on his own. The two groups find refuge in abandoned buildings not far from each other. Cahz knows that the helicopter will return for them but that it will take many hours for it to reach the ship, get refuelled and return. Elspeth gave up her place on the helicopter because she was bitten whilst fleeing from the warehouse. She knows she'll die soon, so that is why she chose to stay behind.
Just as Ali and the others make contact, Cahz's group is forced to flee when their hideout is threatened by a neighbouring fire. Cahz leads Cannon, Ryan and the baby out of the city towards the coast in the hope of contacting the helicopter as it flies in, or if they miss it, when it flies back out. Things do not go well for either group but to say anymore will be to give away too much of the plot.
I really wanted to like these novels, as they had both garnered many positive reviews on Amazon, which is where I bought them. But sadly, I have to say, I was very disappointed with them. Once again, both books are blighted with numerous spelling mistakes, bad grammar and poor layout with sentences breaking up in the middle of a line before continuing on the next line. Whoever edited and proofread these books did a very poor job of it!
Secondly, I found the characters to be unsympathetic and I couldn't really care whether they lived or died. All of the lead characters in both books suffer.. a lot! Fair enough, in a zombie apocalypse people do suffer, but McKinnon really puts everyone through the wringer, both physically and emotionally. It just got too much for me.
Thirdly, there is a science lesson given by Doctor Robertson, Cutler's assistant, girlfiend and the person who examines Sarah, Nathan and Jennifer in the middle of the book as she tries to explain the zombie outbreak. It is long-winded and totally unnecessary. it just so happens that Sarah was a science student, so she understands most of the gobbledigook that Robertson spouts.
Fourthly, I was amazed at how quickly the infection spread on the research ship in Domain of the Dead. In no time at all a crew of about 100 are wiped out and transformed into zombies. I'm sorry, but I just couldn't buy that at all. Especially not when just under half the crew were military personnel.
Finally, is the ending of both books. I won't say much because I don't want to spoil them for you but be warned, the endings are bleak. Plus, when you read about what happens at the end of Domain of the Dead you know that there is no way that Remains of the Dead can have a happy ending. I must admit that my judgement of Remains was very much influenced by me not enjoying Domain. I suspected it would be more more of the same and it was, although if anything it is even bleaker.
As I said earlier, a lot of readers rate this series very highly, so maybe I'm in the minority for disliking them. I don't know if you've noticed, but I've added a number of page tabs to the top of my blog. One of them is for book reviews. I mark my film reviews with scores out of ten but I never rated my book reviews. Until now. If you click on the Book Reviews tab you'll see my ratings for every book I've reviewed so far. Up till now, all of my book reviews have been very favourable. Not so for this pair, however. I'll give them both a score of 4 out of 10.
They are printed by Permuted Press and cost me £10.95 each from Amazon's website. Not good value for money, I felt!
Posted by Vampifan at 12:01