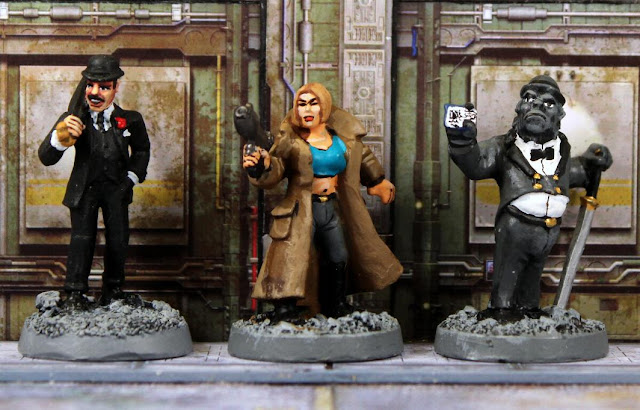 At the far left is Max Normal, who was, for a while, Judge Dredd's best informant. In a city teeming with citizens dressed in unusual, eccentric or downright bizarre fashions, Max stood out for dressing conservatively in clothes which in the mid-20th century would have been perfectly normal: a pinstripe suit and a bowler hat, an umbrella, and a carnation in his buttonhole. In contrast to his looks, Max spoke in futuristic 'streetwise' slang and had many bizarre habits and affections. In Max's first appearance, Dredd expresses disgust at Max not dressing in "decent wild clothes" like everyone else and asks "why do you young people always have to be different?"
He had refined tastes, eschewing water and only ever drinking "shampagne" (real champagne being illegal): this saved him from being affected by the Block Mania contagion which infected the city's water supply in 2104. His one concession to 22nd-century living was his fondness for playing shuggy, an advanced version of billiards played on an uneven surface of hills and valleys. He stopped working for Dredd after criminals held him hostage in an attempt on Dredd's life.Years later, he was used again as a hostage in an attempt on Dredd's life, this time by the Fighting Heart Kwoon.
Although Warlord Games made a perfectly acceptable figure of Max, I preferred this version from Wargames Foundry - AD54 Max Normal. In JDMG, Max is a Level:4 Infantry Hero with the following Special Ability - Nark. If Max Normal is within 12" of a Judge, he may perform a Special action to finger a suspect. The Judge gains a +1 bonus to all Arrest checks he attempts in the same Turn. 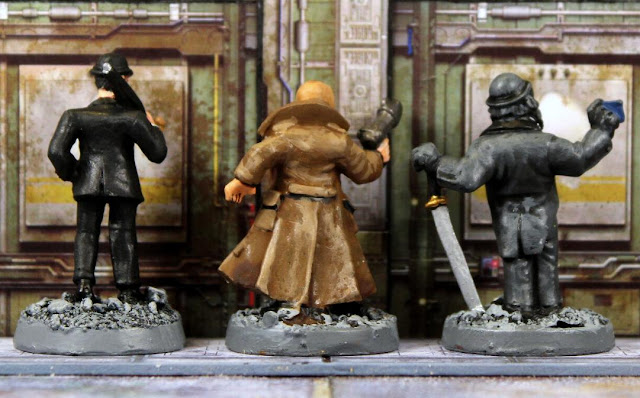 Next up is private investigator, Galen DeMarco. She is the daughter of a billionaire, who had her inducted into the Academy of Law as a Cadet Judge. When her father died, she inherited his immense wealth, but chose to forgo it in order to pursue her career. Her fortune was held for her in a trust.
Considered one of the most capable Judges of her generation, at age 23, she was in line to rise to the rank of Senior Judge, when she instead refused promotion and requested a transfer to – of all places – Sector 301, also known as "The Pit", a notorious crime black spot and dumping ground for Judges who fouled up. She served with distinction and was part of the small cadre of completely honest officers at the largely corrupt Sector House. In 2117 the then Sector Chief was killed in suspicious circumstances. In response Chief Judge Volt ordered the legendary Joe Dredd to take over as Sector Chief with orders to clean up the place. Dredd's hatred for the administrative side of the job was well known (he had personally turned down the Chief Judge's chair many times to avoid it), but he went to work in his usual style. Dredd took the sector by storm and worked regularly with DeMarco until the reason she had come to 301 was revealed: she was having an affair with another Judge, Judge Warren. When this was revealed, Dredd reprimanded her and dismissed her lover from the force for dereliction of duty. DeMarco escaped that fate because she had responded to an emergency call even though it meant revealing her misconduct, while Warren had not. During the massive battle between the Judges and crime syndicate the Frendz Mob that ended the storyline, Warren kidnapped DeMarco with the intent of using her money to set up a new life for himself. Instead she ended up killing him.
Sometime later, Dredd led a Hot-dog Run (training mission) into the Cursed Earth and requested DeMarco to assist him. The two worked well together. Later still she rose to Sector Chief of Sector 303 and found Dredd reporting to her. To his astonishment he discovered that in the interim she had fallen in love with him. Dredd uncharacteristically let this breach of regulations slide and the two parted company once more.
However Judge Edgar of the Public Surveillance Unit, who vehemently disliked Dredd, uncovered the incident and attempted to use it to prove that Dredd and DeMarco had had an non-judicial liaison. Dredd was reprimanded by the Chief Judge, and DeMarco chose to resign from the Justice Department rather than undergo demotion and compulsory re-education. However, Galen was heir to the DeMarco fortune which, once she left the Judges, was turned over to her: a fortune that ran to about 17 billion credits. Dredd also arranged for Galen to have a gun permit and work as a private detective so she could continue to have something to do. During the Second Robot Wars of 2121, DeMarco fought bravely even though she was now a civilian. Meeting Dredd again, her love for him finally died when he again spurned her advances.
This beautifully sculpted figure of DeMarco was produced by Warlord Games. I have always liked DeMarco. The Dredd series has certainly created many very strong and noteworthy females, which I applaud. In JDMG, she is a Level:8 Infantry Hero. She can arrest enemies as if she was a Judge, but she is not required to.

Known as the Simian Sam Spade, Travis Perkins is a partner and bodyguard to Galen DeMarco. Despite being a gorilla with full sentience, Travis was once a Judge, working in the Wally Squad during one of the Justice Department's more lax recruiting periods. This is another figure that was produced by Warlord Games. In JDMG, Travis is a Level:5 Infantry Hero. He has two Special Abilities. First is For DeMarco, in which he may be taken by any force that has selected Galen DeMarco PI as a Mercenary. He may not be used without her. Secondly, he has Swinging Apes, in which he can treat any sheer surface as clear terrain, so long as he begins and ends his Phase on a flat surface, and he can move across any open gap up to his Move without making an Agility check.
Posted by Vampifan at 10:05