I have a mixed bag of Mega City One Judges to show you this time. They all work in the background and are vital to the smooth running of the Justice Department. There can only ever be one Chief Judge and I have four of them, although that does include two versions of Chief Judge Cal. I will only be using the current Chief Judge - Barbara Hershey, in my JDMG campaign. The others were bought purely to complete my collection.
Support Staff includes members assigned to the Academy of Law, Accounts Division, Personnel Division and Public Surveillance Units, plus Station Judges, who spend most of their time within a Justice Department establishment, typically a Sector House, obtaining data from PSU and distributing it to sub-departments to be analysed and distributed to Street Judge patrols for investigation.
The Special Judicial Squad (SJS) are men and women dedicated to ensuring corruption and other wrongdoing is stamped out within the Justice Department. They are usually extremely competent veterans of the streets since the criminals they normally face are both highly motivated and well equipped. SJS Judges can still be found on the streets, following leads and supporting their colleagues when necessary. 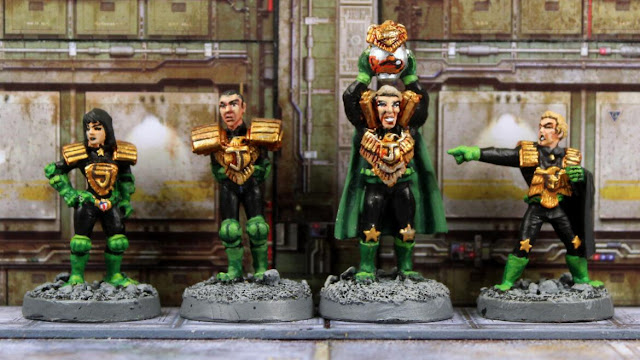 At the far left of this quartet of figures is Chief Judge Barbara Hershey. Taking over from Chief Judge Hadrian Volt after the Second Robot Wars, Hershey has had the longest reign of any Chief Judge other than Clarence Goodman who served from 2057 to 2101. She was appointed Chief Judge in 2122 and served until 2131 when she was succeeded by Dan Francisco. His tenure only lasted three years and Hershey was reappointed Chief Judge in 2134, where she remains in office to the present day (2138 at the time of writing). Since then she has presided over several major disasters that have threatened Mega City One, and has survived numerous assassination attempts. I was a big fan of Hershey from the first time I saw her when she was just a Rookie Street Judge and my opinion of her remains as strong as ever now that she is in charge of the Justice Department. She rules wisely and commands the respect of almost all of the Justice Department, including most tellingly of all, Judge Dredd. This figure, produced by Warlord Games as part of the Heroes of Mega City One boxed set is an excellent representation of her. A great figure befitting of a great character. In JDMG she is a Level:14 Infantry Hero, making her one of the most powerful and experienced Judges in the game.
Next in line is Chief Judge Hilda Margaret McGruder, who served as Chief Judge from 2104 to 2108, succeeding Judge Griffin and from 2112 to 2116, succeeding Judge Silver. A former head of the SJS, McGruder was a controversial figure whose grip on sanity decreased as she got older. Many of her decisions were unpopular, particularly in her second term (the abolition of the Council of Five and the failed Mechanismo robot programme, to name but two), which ultimately led to her resignation. She died fighting criminals in the Cursed Earth, on a top secret mission with Judge Dredd, which remains classified. Her figure is produced by Wargames Foundry as AD44 Chief Judge McGruder from their 2000AD range. It is a very good likeness of her and is well sculpted, although perhaps a tad too tall. 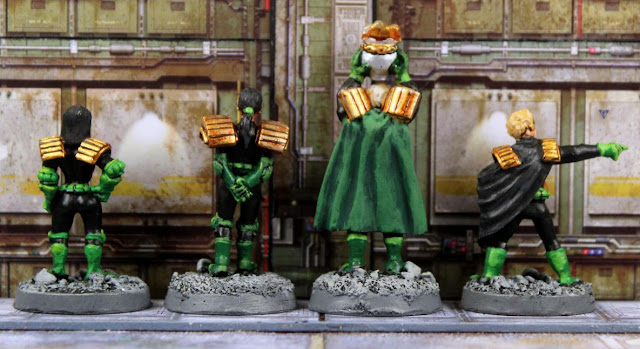 The other two figures are different versions of Chief Judge Cal, with the one second from right being AD16 Chief Judge Cal with Judge Fish from the Wargames Foundry 2000AD range, and the one at the far right being Warlord Games' version from the Chief Judge Cal's Retinue boxed set. Of the two. I prefer the one made by Warlord Games, but both are very good sculpts. His reign as Chief Judge lasted exactly 100 days from 2100 to 2101 and was documented in the story entitled "The Day The Law Died!" which ran in 2000AD progs #89 - #108 (1978 - 1979). A mad Chief Judge, who made his goldfish his deputy, Cal brought Mega City One to its knees, through his own powerful force of will and pure cunning. It took a dedicated force of Judge-tutors, led by Judge Dredd, to end his reign. 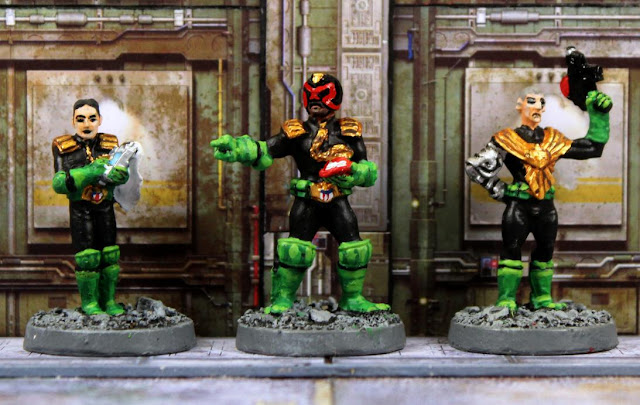 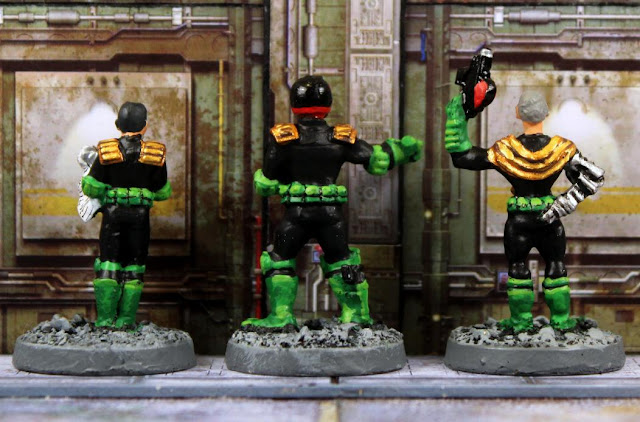 In the centre of this trio is Judge Wheeler, who works as a Chief Quartermaster in one of the Sector Houses. A former Banshee Interceptor driver, Wheeler is very knowledgeable about all of the Justice Department vehicles. This Judge figure was supplied with the Banshee Interceptor car. I decided to give him a promotion in my campaign from Pursuit Driver and make him my team's Chief Quartermaster.
At the far right is Academy of Law Tutor Sawyer. Judges permanently injured in the line of duty often find themselves reassigned to the Academy of Law, where their experience and knowledge can be passed on to the next generation of Judges. Their bionic replacement limbs and organs are a stark warning for cadets of the dangers present on the streets of Mega City One. Judge Sawyer has an advanced bionic right arm and an advanced bionic left eye.

Finally, I come to my SJS Judges. At the far left is SJS Judge D'Spatch who is available as AD58 SJS Judge Slocum from the Wargames Foundry range of 2000AD figures. I renamed him because Judge Slocum was part of Chief Judge Cal's retinue and died at Cal's hands, being pickled alive for inadvertently calling Cal "crazy." SJS Judge D'Spatch appeared as a character in the Rookies Guide to the Justice Department by Mongoose Publishing for their Judge Dredd Role-Playing Game. I found him interesting enough to use as a character in my own campaign. Interestingly, and perhaps disturbingly, he sports a Hitler moustache! Note that he is armed with the Mk.I Lawgiver Pistol.

The other three figures were all made by Warlord Games and I have named them all. From left to right are SJS Judge Fincher, SJS Judge Patton and SJS Judge Sharp. The figure of Fincher was an unnamed Judge who was part of the Chief Judge Cal's Retinue boxed set. The other two figures were available to buy individually. SJS Judge Patton is female and note the Judge's helmet at her feet. It has a bullet hole in it! This makes me wonder, has she just executed a corrupt Judge or is she investigating the murder of a Judge? SJS Judge Sharp is unusual in that he sports a full beard and moustache, a practice that is generally frowned upon by sticklers for the Law. It would certainly not pass unnoticed by Judge Dredd!
Posted by Vampifan at 08:58