Eating has become not just a past time, but a sport in Mega City One, with food contests spreading throughout every sector. Fatties, despite their massive appearance, are actually highly trained individuals, dedicated to consuming as much as they can, and growing as large as they can.
At the time of writing I have 14 Fattie figures and I'm dividing them into three groups according to their size. I'm going to start off by reviewing my seven Lightweight Fatties. I'll show you my four Middleweight Fatties and my three Heavyweight Fatties in a later post. All of the figures shown in this post were made by Citadel Miniatures for the Judge Dredd Role Playing Game, published by Games Workshop in 1985. I have yet to name any of them.

At the far left is a Fattie holding a placard saying "Feed me" on one side and "I came, I saw, I had some lunch" on the reverse side. I added his larger shoulder pads by sculpting them out of Milliput. I also expanded his belly slightly (again with Milliput) just to make him a bit fatter than his colleagues here. He has a small food tray hanging around his neck, presumably to keep his food closer to his mouth.
Next to him, this Fattie is an unconverted figure. He is munching on a jumbo-sized hot-dog. Note how the buttons around his belly have popped open.

The other two Fatties are both enjoying a large ice cream. Neither has been converted. The one at the far right looks remarkably like former comedian and nightclub owner, Bernard Manning. A key feature of all Fatties is their Belliwheels, a single wheel that fits underneath their huge bellies to help support their weight and to aid in their movement. In the Judge Dredd Miniatures Game, Fatties have the following special rule regarding Belliwheels. Once a Fattie gets going, there is little that can stop him. If a Fattie takes two consecutive Move or Melee actions in the same turn, the second Move or Melee action must be made in a completely straight line, but will move an additional D10+2". In addition, the Fattie's close combat attacks will ignore all Armour except against vehicles and have a Damage score equal to the Fattie's remaining Hits (Fattie Level:0 Minions start with 6 Hits). Fatties may only move in clear terrain.

The two Fatties to the left of the photos directly above and below have been out shopping, buying more food. The one at the far left had the gap uncovering his belly filled in with Milliput. For the Fattie in the centre I added his larger shoulder pads and elbow pads out of Milliput.

It always bugged me that all of the figures of Fatties were male. Whilst I can't remember seeing any female Fatties in the Judge Dredd comic strips, surely they must have existed. Women are just as likely to binge eat as men. So I came up with this conversion of a female Fattie. I added more girth around her belly and backside, added large breasts and sculpted a new head and right arm for her. I'm happy with the result and it does make her unique. 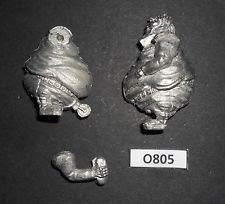 The picture to the left of here shows a Citadel Fattie in its original state. They came in three parts. As you can see from my photos above, they came with a random selection of right arms and left body halves. I don't know how many different versions there were, but I bought quite a few. This photo was taken from a seller on eBay, who, at the time of writing, was asking £25.00 for this figure. Another seller had more of these Citadel Fatties for sale but was asking £52.00 for each one!
Posted by Vampifan at 09:17