In the Judge Dredd Miniatures Game, mercenaries are most commonly used by a force when facing a stronger enemy. While mercenaries will allow players to always fight on an even scale, they are usually expensive to use and will always leave your force after their work is done. Some mercenaries are no better than common grunts, but can be used in vast numbers, while others are great heroes or celebrities, known across Mega City One and beyond. They are also a good way of gaining models that are not normally accessible in a force list. Whenever a player finds he is facing a force of greater points value in a campaign, he may use any number of mercenaries to bring his force into balance. Once a battle has been fought with mercenaries, they are removed from the force immediately - they never gain Experience Points. Mercenaries come in many different forms. Some are usable by the Justice Department, including such notable Heroes as Judge Dredd, Chief Judge Hershey and Psi Judge Anderson. Others are infamous perps such as the Executioner, Oola Blint, Orlok the Assassin, Sabbat and Stan Lee. And others are unnamed generic figures such as a Bat Burglar, Futsie, Robodoc or Vid Reporter. I'm going to showcase just a few of my own mercenaries in this post. All six figures were produced by Warlord Games. 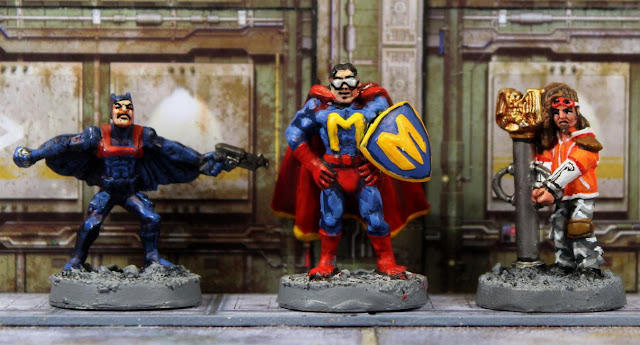 First up is the Bat Burglar, whom I upgraded from a Level:0 Infantry Minion to a Level:1 Infantry Hero and gave him the name of Benny the Bat. Batting is a popular, if somewhat restricted, activity in Mega City One. Around blocks where it is permitted, citizens can be seen soaring the heights with rocket-assisted bat wings. Enterprising thieves have taken this hobby to heart, allowing them access to apartments on the highest lock levels to steal in through the exterior windows, which rarely have the same level of security as the block's interior. Benny is of course, equipped with his Bat Glider and is armed with a Handgun Pistol. His two Talents are Agile and Stealthy. Benny the Bat costs 130 Credits, whereas a Level:0 Infantry Minion Bat Burglar would cost 80 Credits.
Another flyer is the Lone Vigilante known as Megaman. Although he is usually treated as a force on his own, he can be hired by other forces as a mercenary to aid their cause. It takes a certain kind of nut to decide that they will do a better job of policing the streets of Mega City One than the Judges. These vigilantes prowl the streets at night, looking for cheap punks terrorising the decent people of the city. Most turn violent, becoming little better than the scum they pursue, but others genuinely believe they are on the side of Right, and it is not rare for them to adopt a superhero persona. I have made Megaman a Level:3 Infantry Hero Flyer. But whereas the Bat Burglar uses a high-tech gadget to fly, Megaman uses the Psionic ability of Telekinesis to fly. He is equipped with an Energy Shield (it can absorb 10 Hits of damage) and a Medi-Kit. His four Talents come from two lists. From the He Knows Kung Fu lists he has Martial Artist (he loses the Weak rule from Fists and Feet attacks) and Black Belt Martial Artist (he adds +2 damage to his Fists and Feet attacks). From the Telekinetic lists I chose Concussive Blast (every model within 5" of him must pass a Will test or suffer -1 to all dice rolls until the end of their next phase) and Levitate (as long as he makes a Melee or Move action after using this Talent he may move 12" up or down as well as his normal forward movement for the action). Megaman has 7 Psi Points and costs 375 Credits. 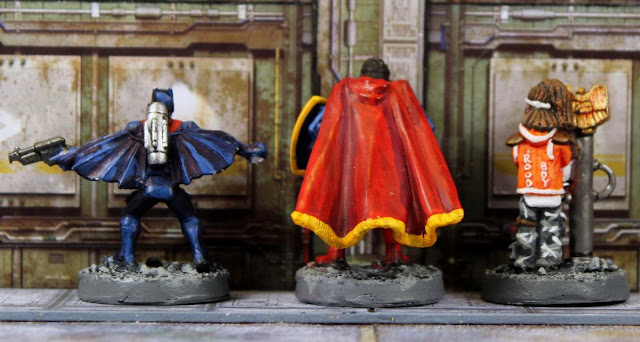 Third in line is a Punk called Rood Boy. The majority of street gangs in Mega City One are filled with cheap punks, petty criminals on the lookout for the one big score that will set them up for life. The average punk is selfish, mean and violent, though they often have some loyalty to the gang they have pledged themselves to. Rood Boy is a Level:0 Infantry Minion with no armour, equipment or weapons. His value is purely in making up the numbers of a gang that hires him. The figure shows him handcuffed to a holding post having been arrested for a minor offence. He'll soon be back out on the streets. Punks cost 20 Credits to hire. 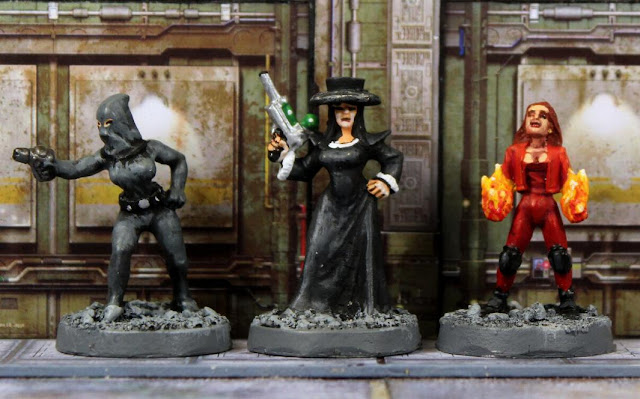 Next up are three female mercenaries. At the left is The Executioner. Thrown out of the Academy of Law in her twelfth year for a liaison with a man she eventually married, Blanche Tatum became a vigilante known as The Executioner as she hunted down the gangsters responsible for her husband's death. Her crime spree came to an end when Judge Dredd eventually caught up with her. She is armed with a Handgun Pistol and carries no equipment or wears any armour. She is a level:2 Infantry Hero with three Talents - Academy Star, Accurate and Brave. She is incorrectly listed as being worth 75 Credits. Her actual cost should be 160 Credits. I plan on bringing her back in my JDMG campaign as a different person but wearing the same outfit and using the same name of The Executioner.
In the centre of this trio is Oola Blint. A strikingly beautiful woman, Oola became the Angel of Mercy, visiting the lonely, the desperate and the dejected to grant them the sweet release of a dignified death - whether they wanted it or not!  Her identity was finally discovered by Judge Dredd in Shake-down during a raid on an apartment block when crime levels in said block were at an all-time high. However, she escaped to Brit-Cit (via Oz) with her husband, Homer, and opened a legal euthanasia clinic. Much to Homer's dismay, however, Oola began murdering people again (leading to Dredd being sent to Brit-Cit to investigate): she revealed her motive to be a sham when she admitted that killing was not the same when the victims "want it". She also revealed she intended to kill him as well, as a present for Christmas. Homer informed the Brit-Cit Judges and they and Dredd raided the Blint's apartment block, but Oola had already fled after injecting her husband. Dredd managed to save his life and continued his pursuit. Oola willingly give herself up and both Blints were incarcerated for life for their crimes, in a couples block – but Oola refused to talk to Homer any more. Oola is a Level:1 infantry Hero with two Talents - Accurate and Stealthy. She is armed with a Poison Gun, which works the same way as a Handgun but if it causes any Hits to be deducted from an Infantry target (not a Robot) that model will automatically lose 1 Hit at the start of every subsequent turn until a Medi-Kit is used on it. If a critical hit is caused by the Poison Gun, the affected model will lose 2 Hits at the start of every turn instead. Oola costs 70 Credits. 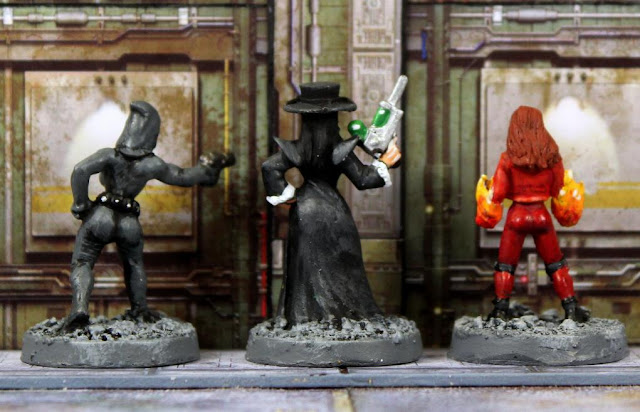 Finally, is a very powerful mercenary - the Pyrokine. Having spent most of her life hiding from the Justice Department's Psi-Division, the Pyrokine nevertheless has powerful abilities at her command, and has learned how to survive. On the streets of Mega City One these abilities command a high value. The Pyrokine is closely related to the Telekine in mental ability, but instead of concentrating on mind over matter, she focuses on mind over energy. By agitating particles in any solid object, the Pyrokine can cause fire to spring up spontaneously. The Pyrokine is a Level:7 Infantry Hero with a Psi score of 15. Her eight Talents are Concentrated Mind, Flaming Shroud, Incinerating Finger, Pyrokinetic Burst, Resist Flames, Silent Action, Stealthy and The Power Within. I have yet to give my Pyrokine a name. I was thinking something descriptive like Helen Burns, but I might go in the opposite direction and give her a less cliched name. I welcome any suggestions. The Pyrokine costs 225 Credits.
Posted by Vampifan at 00:40