Wave 2 of the excellent Future City Scenics 28mm scale resin-cast scenery items were recently released on the Wargames Terrain Workshop webstore. Once again sculpted by Dave Stone, with a little input from yours truly, these will fit in well in any sci-fi or near future setting, but for me, they will see most use in my Judge Dredd Miniatures Game campaign.

First up is a ubiquitous drinks dispenser or Soda Machine as Dave has called it on his webstore. I asked Dave for this item to be made and he duly obliged. The beauty of this item is that it can be used in a contemporary setting as well as sci-fi setting.

I had a very specific design in mind for the unpainted version. I am a big fan of Super Dungeon Explore by Soda Pop Miniatures and Ninja Division Games. Their mascot figure is Candy and her odd little pet, Cola. Soda Pop Miniatures seemed like a good name for a drinks dispenser. So using a desk top publishing program, I cut and pasted some pictures of Candy and Cola along with the SPM logo to come up with front and side images for my drinks dispenser. Then I shrunk them to size, printed them out and glued them to the drinks dispenser. I am really, really pleased with how they have come out.

I now have a totally unique scenery item that I can use in numerous settings, including the fantasy world of SDE's Crystalia. I have placed my figure of Candy and Cola alongside her drinks dispenser and my figure of Judge Scott alongside the Rad Cola machine.

When Dave asked me for ideas for generic scenery items for this range, I immediately suggested flying drone cameras. Dave came up with this design for a surveillance drone. I think he's done a great job in sculpting them. You get two drones in a pack for just £1.00 unpainted, or if you want painted versions they cost £1.80 for a pair. Please note that they do not come with flying bases or any kind of bases. Dave explained this was for a few reasons - one, it kept the price down, secondly, some people like clear flying bases, as I've used here, whilst others prefer black flying bases. Some prefer the hexagonal bases but others prefer circular bases. I simply ordered these clear plastic bases from eBay and I'm very happy with them. In the photo above the drones are positioned from left to right with front facing, right side, left side and rear facing. 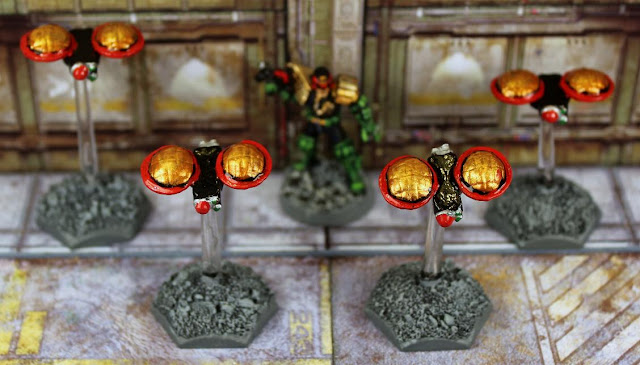 The obvious paint scheme for them would be an all-over silver, as Dave has done on his painted versions. But I wanted mine painted as Justice Department Spy in the Sky cameras, so I chose an appropriate colour scheme of black, gold, red and silver to tie them in with my other Justice Department vehicles. I mounted them on one large, two medium and one small flight stems and textured the bases. These will prove a very useful tool for my Judges. No one can hide from the Law! They're watching you!

Oops, I almost forgot - here's a link to the new scenery items - http://wargamesterrainworkshop.co.uk/?product_cat=futurecityscenics
Posted by Vampifan at 09:49