I have been promising you a St. Trinian's Schoolgirls' scenario for some time now. Well, it's time to deliver and here it is. This scenario is based on a simple set of rules (they are only two A4 sized pages long) called Pillow-a-go-go that I downloaded from the internet a few years ago. I never thought that I'd get to play it but once my St. Trinian's project took off, I knew this was the perfect opportunity to give this game a try. Note that in Pillow-a-go-go playing cards numbering ace to six are used in place of dice, a needless and unnecessary method of randomly generating numbers, in my opinion. I have opted for the tried and tested method of using six-sided dice.
The objective of the game is that whoever controls the Supra-King-Sized Bed at the end of the scenario is the winner. This is achieved by knocking your opponents off the bed. The bed measures 6" by 6" and movement on the bed is 3". Movement on the floor is 4" but that never came into play during this scenario. Combatants may make 1 move followed by 1 attack each turn. An attack must beat an opponent's defence score to succeed. If the scores are tied or the defender wins, the attack misses, is dodged or is absorbed. Combatants are forced off the bed by blows from their opponents. When a combatant is hit they are knocked back 1" directly away from their attacker. Any modifiers for Pillows, Special Attacks or Dirty Tricks that override  the basic rules takes precedence.
Combatants have three attributes;
Attack: the ability to deliver a blow to your enemy.
Defence: the ability to avoid or absorb blows.
Agility: the ability to move around the bed.
Each combatant has three points that may be allocated against any of their attributes however they wish. 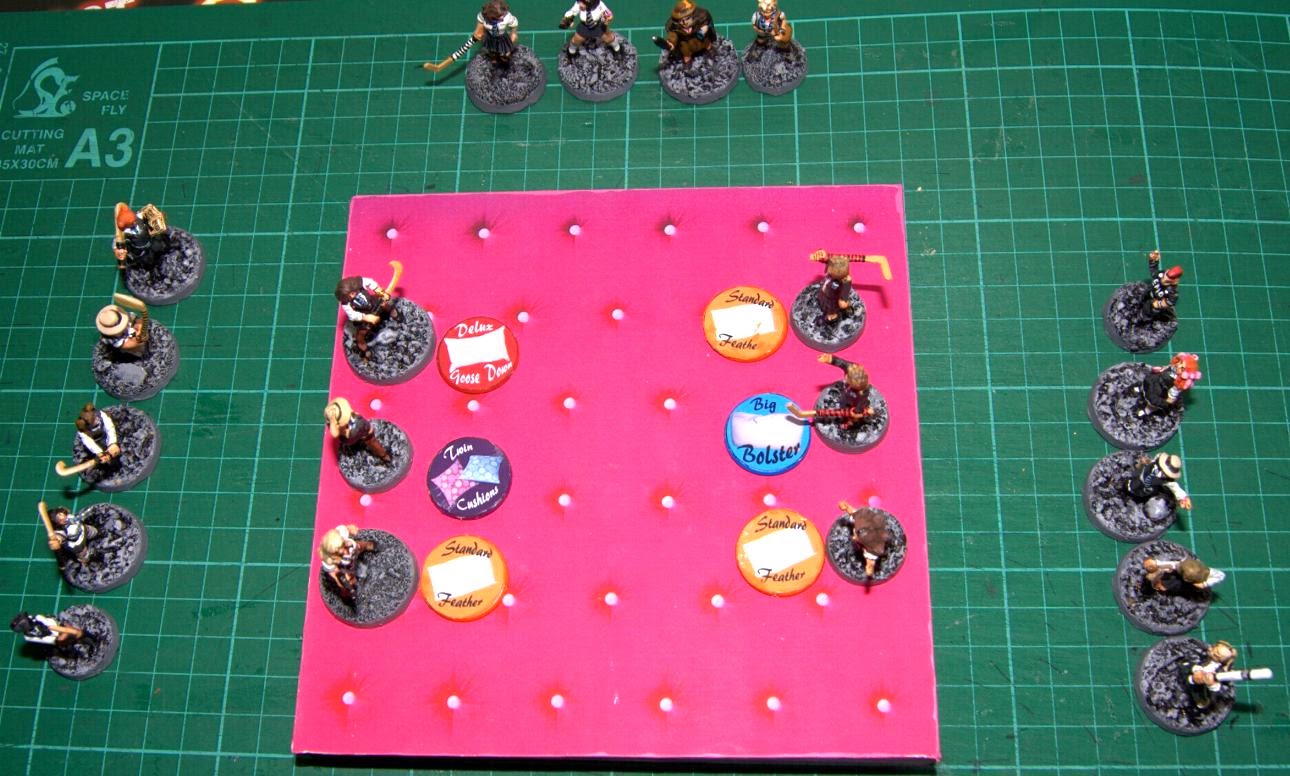 THE PILLOWS
Each combatant randomly draws one Pillow token from a cup and places it beside their figure.
April drew a Deluxe Goose Down Pillow, granting her a +1 bonus to hit.
Chelsea drew Twin Pillows, granting her 2 attacks per turn.
Rachel drew a Standard Feather Pillow, offering no bonuses or penalties.
Tania drew a Standard Feather Pillow as well.
Tara drew a Big Bolster, which knocks opponents back 2" instead of 1".
Rosie also drew a Standard Feather Pillow.
To pick up a dropped pillow, the combatant forfeits either her movement or her attack (player's choice). They must be in base contact with the pillow. They then drop their own pillow and replace it with the new one.
TURN 1. Initiative - First Formers = 2, Posh Totty = 3.
Both sides roll 1d6 each to determine who moves first. In the event of a tie, re-roll until there is a clear winner. The first player activates one of their combatants, carrying out all movement and any other actions. Once that combatant's activation ends, activation moves to the next player in initiative order who then activates one of their combatants. This pattern continues until all players have had the opportunity to activate all of their combatants. When this occurs the turn has ended. Note that for all results shown, the First Formers' score comes first, followed by the Posh Totty score. 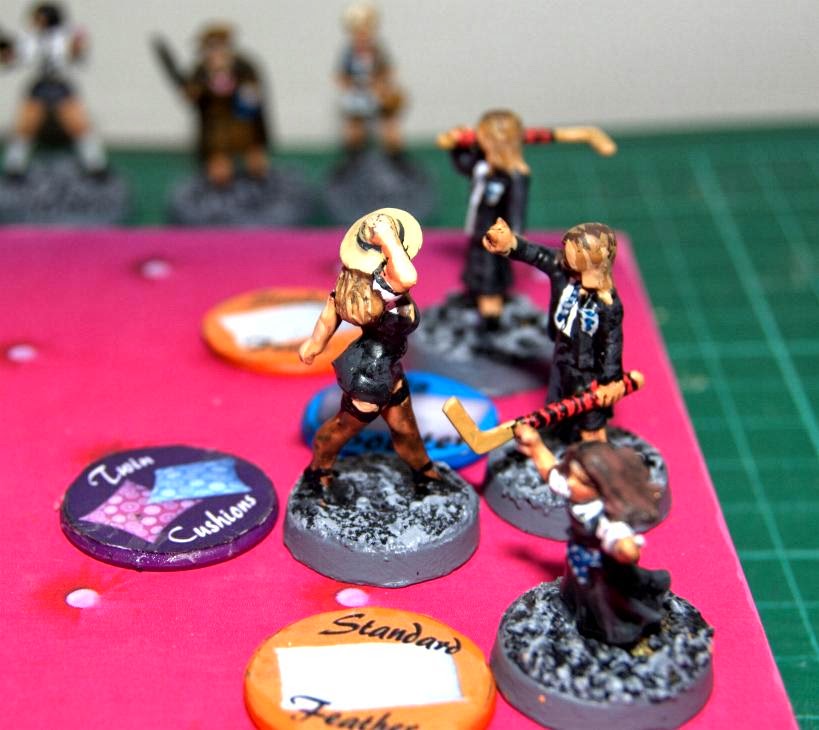 As leader of the Posh Totty tribe, Chelsea chose to activate first. She moved next to Tara, hoping to take out the most dangerous opponent of the First Formers. She launched a twin attack with her two pillows. The first attack was defended (5-3) but the second attack struck home (3-4). Poor little Tara was knocked 1" back and fell off the bed, dropping her Big Bolster Pillow as she fell. First blood to the Posh Totty and a major blow to the First Formers. 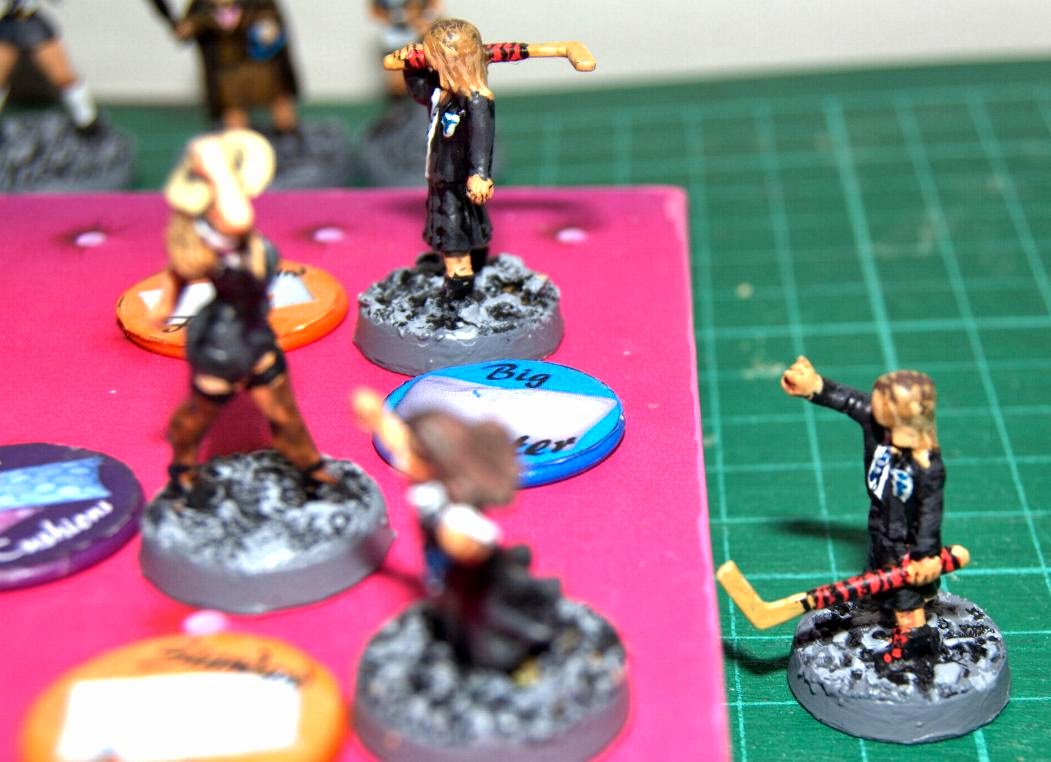 Tania forfeited her movement to pick up her twin sister's dropped Big Bolster. She dropped her own Standard Feather Pillow and whilst crouching down made a Dirty Tricks attack against Chelsea. She grabbed hold of Chelsea's favourite Kelly Brook designer panties and pulled them down around Chelsea's ankles (7-4). Chelsea's face turned red with embarrassment. From the sidelines the other first formers cheered. This tactic meant that Chelsea must forfeit her next movement to comport herself. 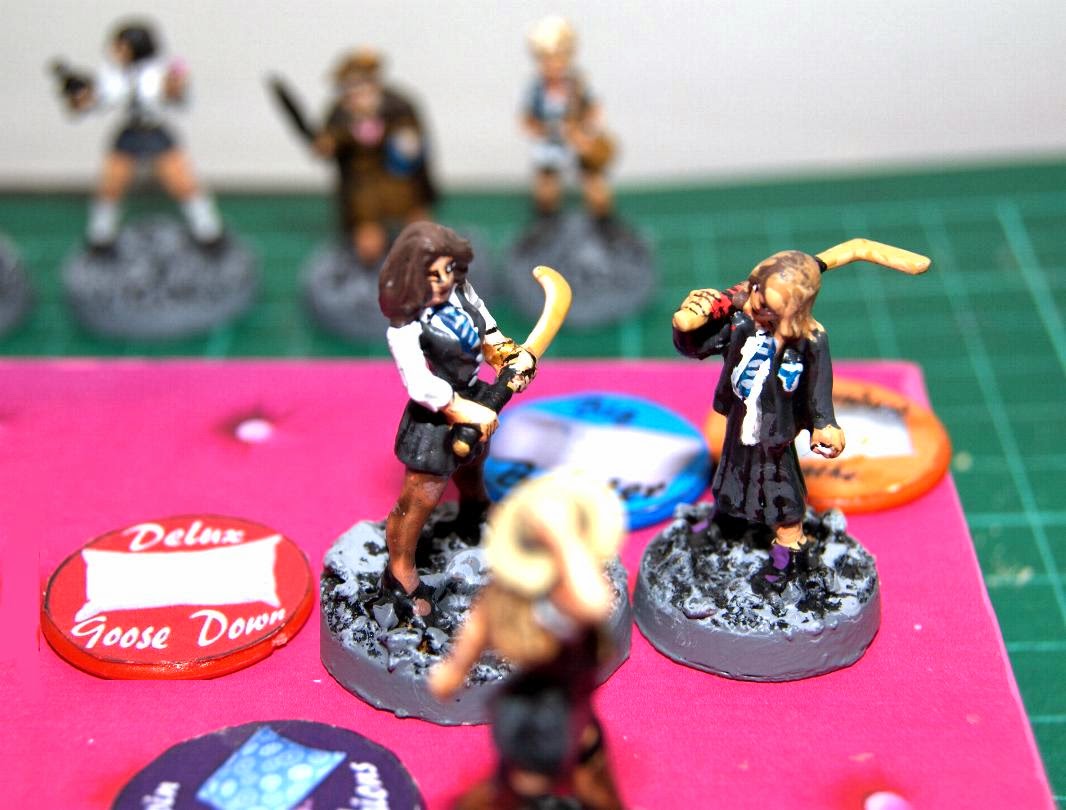 This outrage only served to anger April and she charged across the bed to attack Tania. 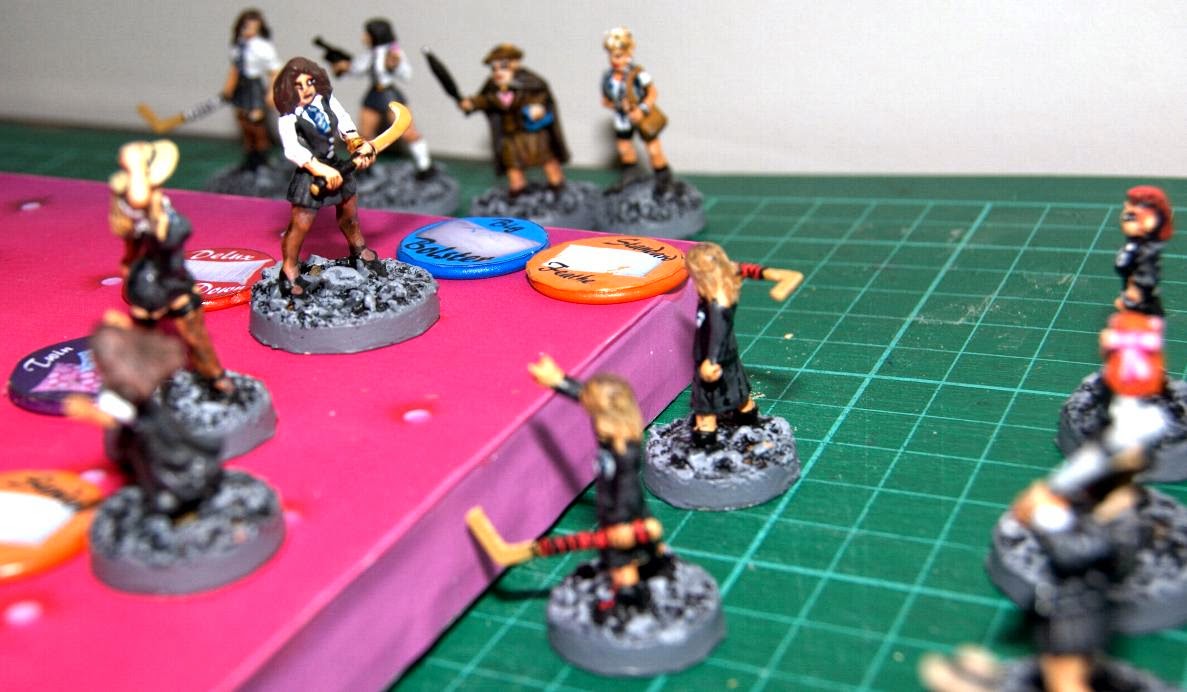 April swung her Deluxe Goose Down Pillow at Tania's head and scored an emphatic hit (2-7) that sent Tania cartwheeling off the bed to join her twin sister on the floor. Ouch! 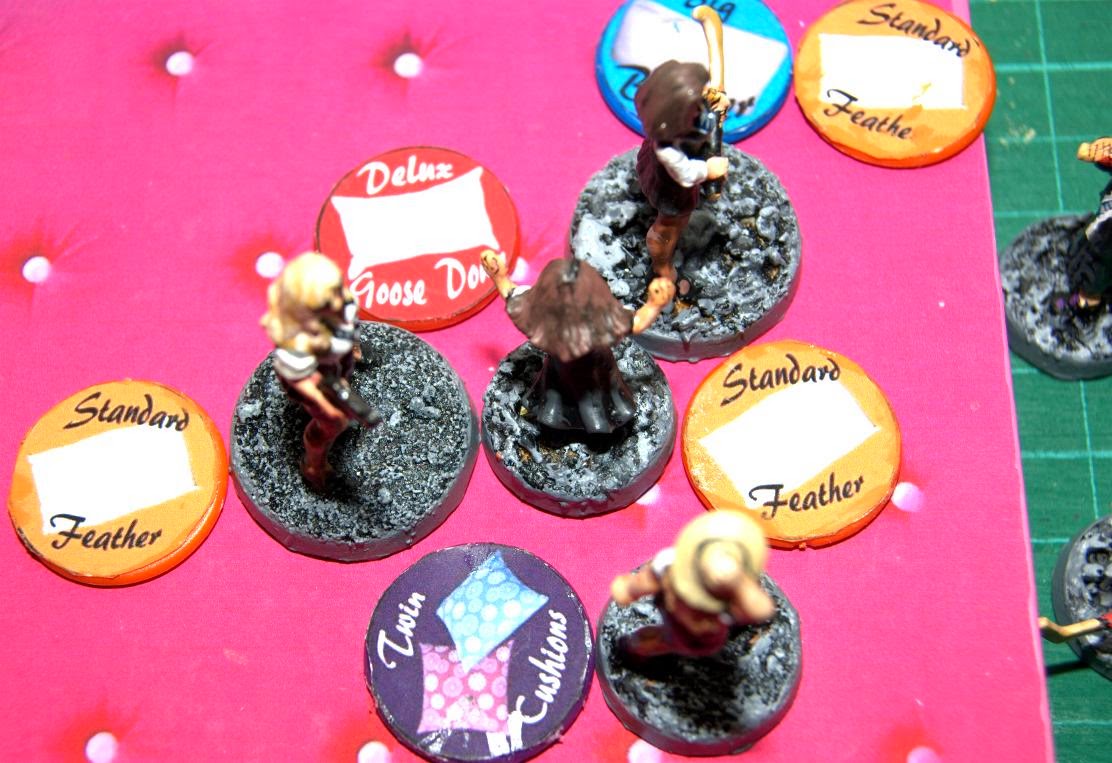 Young Rosie skipped past Chelsea to deal vengeance upon April. First Formers rarely fight fair and so Rosie attempted another Dirty Trick - the Broken Nail ruse. Rosie squealed in mock pain and held out her left hand digit finger to April.
"I've broken a nail, " she sobbed.
She had to roll 1d6 and if the result was an odd number, the ruse would work, allowing her a free attack which must be defended against with a -2 penalty. However, if she rolled an even number, the ruse would fail, giving April a free attack against Rosie. Sadly, Rosie rolled a 2. However, it turned out okay in the end as April's attack tied with Rosie's defence (4-4).
Finally, Rachel charges at Rosie. 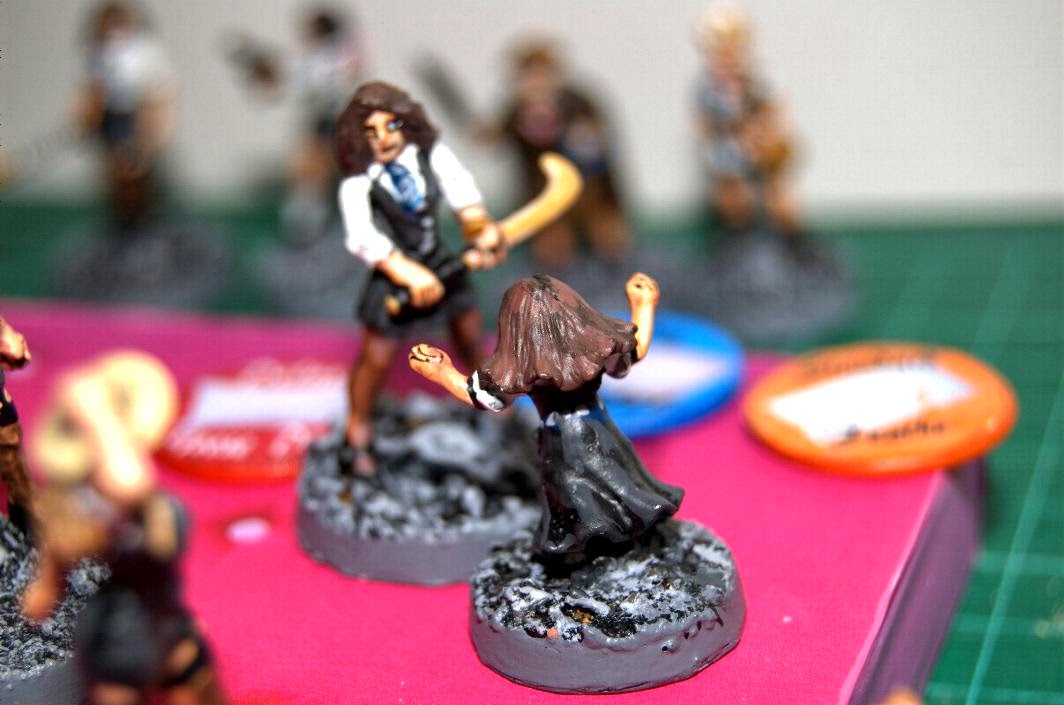 Rachel's +2 to attack is nullified by Rosie's +2 to defence, but even so, she still goes for it. Rachel wins (5-6) and the First Former is knocked back 1", placing her right on the edge of the bed. This ends Turn 1. 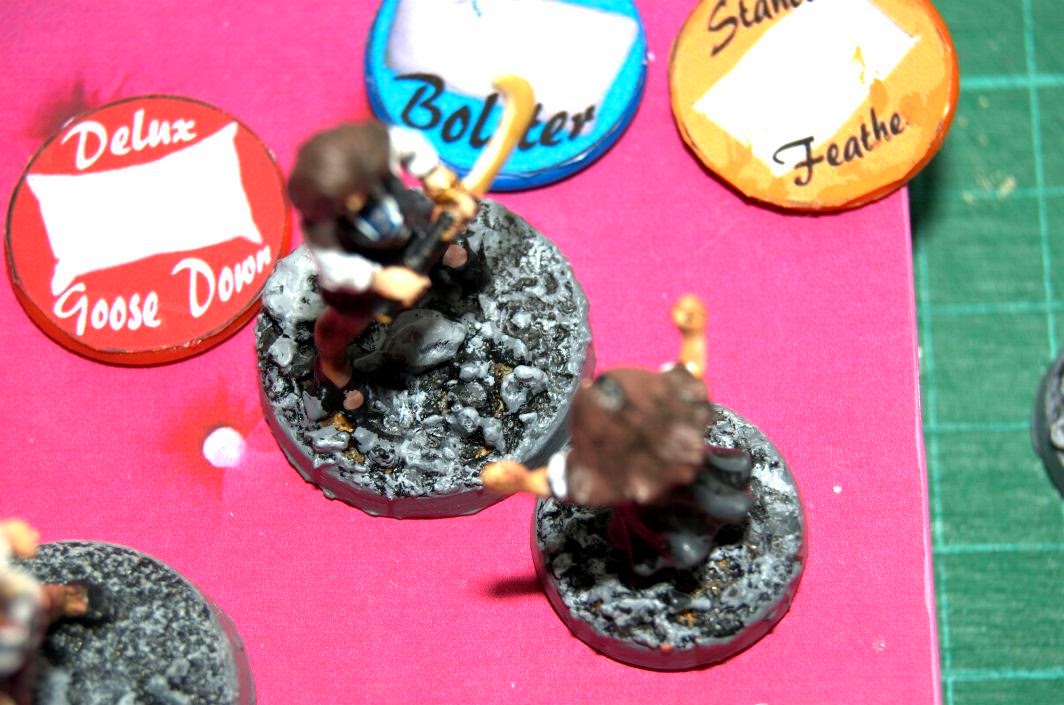 Rosie forfeits her movement to launch a Special Attack against April - a Round House blow. She suffers a -1 penalty to hit but if she succeeds, April will be knocked sideways 2" and off the bed. It is well worth the gamble, but alas, it doesn't pay off. April defends well (3-5) and it looks curtains for the First Formers. 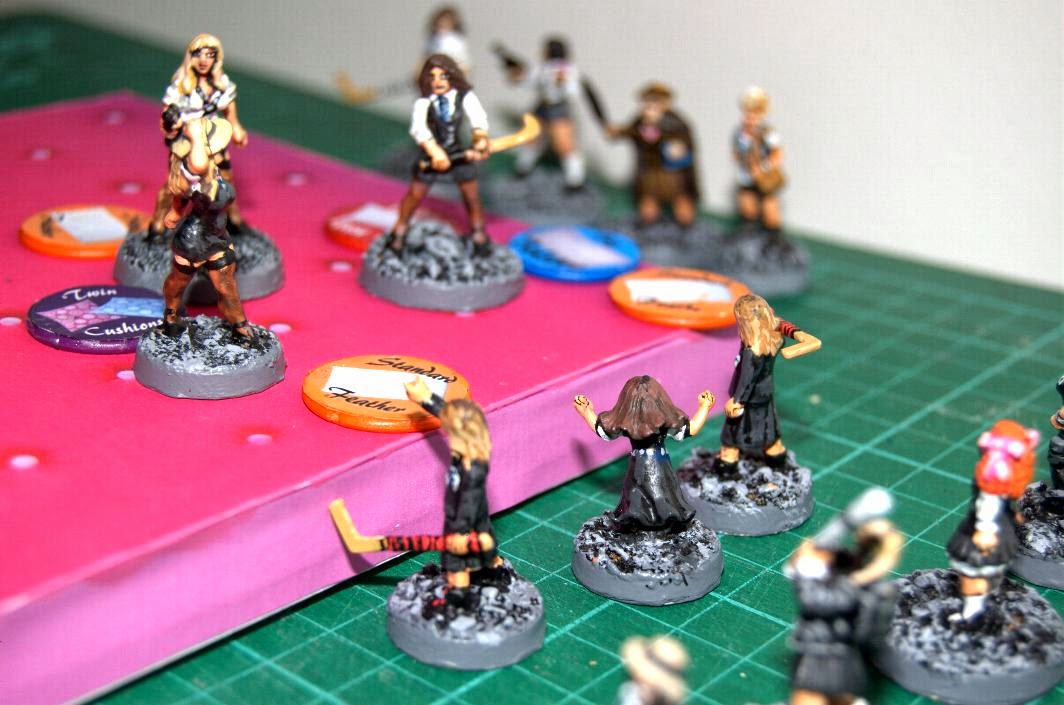 Sure enough, April swats Rosie with contemptuous ease (winning 3-6) and the last of the First Formers goes crashing off the bed. In the end, it was a comfortable victory for the Posh Totty tribe.
AFTERMATH.
That was such a lot of fun and made a pleasant change from battling zombies. When this game was first introduced I can remember some folk on such forums as The Miniatures' Page decrying it as sexist nonsense. However, some fathers praised it for being a child-friendly game that helped introduce their daughters to the overly masculine world of war-gaming. For my own part, I see it as a harmless piece of fun. It is quick to play and easy to learn. This game took just over an hour to play but would have been over much quicker if I wasn't taking photos of the action and making notes for my blog.
In fact, I enjoyed it so much, I want to play it again!
Pillow-a-go-go was originally published by Australian company, Fiendish Fabrications but has vanished from their webstore. Fortunately, I still have the game saved on my computer. I can send you the rules as a 3-page PDF if you want a copy, (just send me an e-mail) or if there is enough interest I'll rewrite the rules in the near future, with references to d6s instead of playing cards.
Finally, please note that I'll be taking a short break this coming weekend, so hopefully, I'll see you next Wednesday.
Posted by Vampifan at 10:18