Before I start a series of reviews of the perps that I have for my Judge Dredd Miniatures Game, I want to take a brief look at some of the civilians who populate Mega City One. I should point out that I have loads of 28mm scale sci-fi civilians that I have collected over the years, most of whom are very usable for my JDMG campaign.  These nine that I'm showing here are the ones I most wanted to highlight. There will be more posts to come in the future, showcasing the rest of my civilian collection. 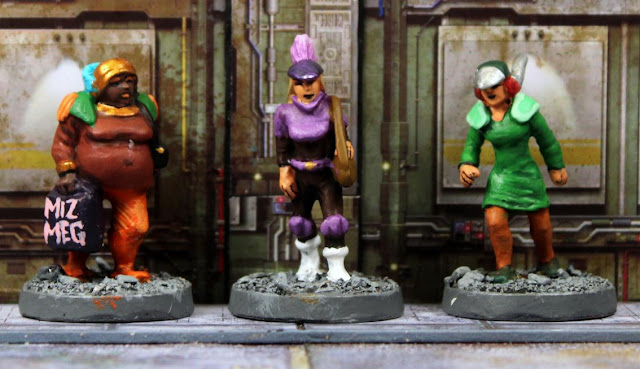 I'll start with a trio of females, all of whom were produced by Warlord Games as official MC1 civilians. Rather unusually I have named all of the figures I'm reviewing here, which will help identify who's who. When naming MC1 citizens, it seems appropriate to go for more unusual names. So, at the far left is Caramel Maribel, a nice rhyming name. This dark skinned lady has something of a weight problem but not enough to put her into Fattie territory. (Fatties will be reviewed at a later date.) It looks Caramel has been on a shopping trip and is returning home with new clothes from "Miz Meg" a well-known upmarket clothes store. Note Caramel's orange lipstick and eyeliner and her turquoise hair. She likes to stand out in a crowd! 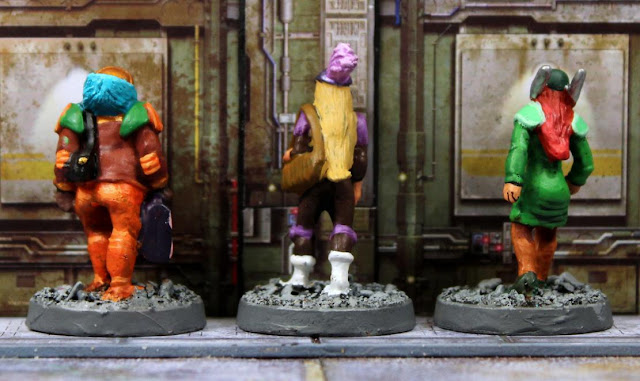 In the centre is long-haired blonde, Kylie Tchoryk. Just like Caramel, she is carrying an oversized handbag. Her lilac and brown outfit has been accessorised with that most ubiquitous and famous clothing item - the knee-pads. I don't know why, but knee-pads are extremely popular in the Judge Dredd series.
At the far right is Betty Umble, a young lady with flame red hair. Betty is wearing a short green dress with big pale green shoulder-pads. There is nothing remarkable about her - she is just a righteous upstanding citizen and an unemployed mother trying to make ends meet. Yes, they do exist. Not everyone is a criminal in Mega City One. 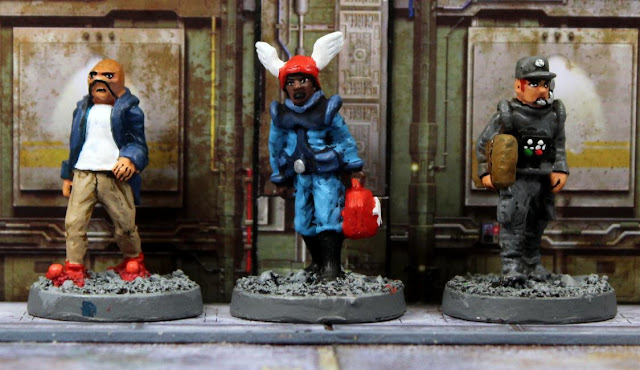 Next up, are three male civilians, and these were also produced by Warlord Games to go with the female Citizens. At the far left is Mitch Feig. He's wearing a bronze masked helmet, which could be deemed as suspicious. The one other thing that makes him stand out are the big fluffy bobbles on his shoes. What was he thinking when he bought them? 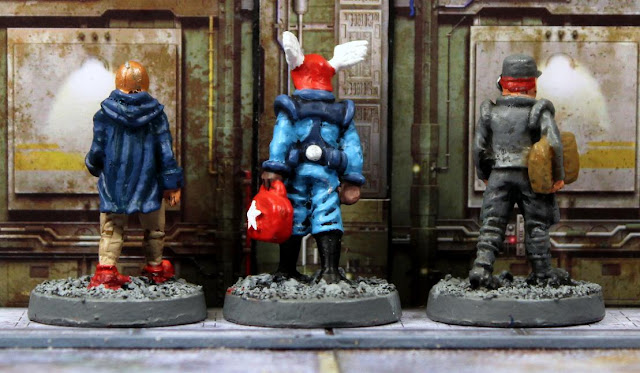 Wendell Sprot is the name of the dark-skinned gent in the centre of the group. He is an employee of the White Star Cruise Company, which caters for the more affluent citizens of Mega City One. He is lucky to have a job as unemployment stands at over 90% in Mega City One, which goes a long way to explaining why crime is so rampant.
At the far right of this trio is Erik Zumwalt. He works as a robotics engineer in a small company that manufactures service robots. He is carrying a large parcel under his right arm. What's inside is a mystery. 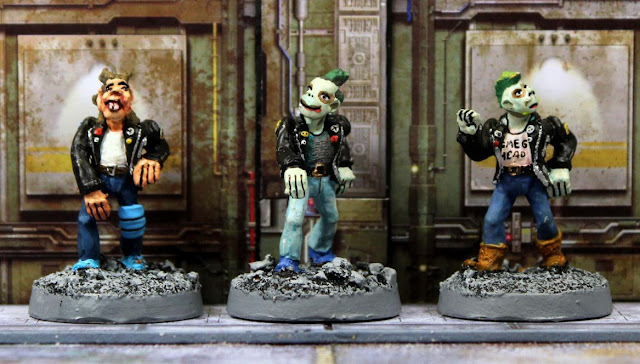 Moving on, these three figures were produced many years ago in the mid-1980's by Citadel Miniatures for the long gone Judge Dredd role-playing game by Games Workshop. They produced a huge range of figures and I bought almost all of them. Some of the Citadel figures look too small when compared to the likes of those produced by Warlord Games (their Judges especially look under-scaled). But many others do fit in well, like these three. These three civilians were part of the Citadel range of Uglies. The whole craze of looking ugly was created by Otto Sump, who built up a very lucrative empire selling products that made people look ugly. Sump was murdered by his mother in 2124 but his Ugly Clinic empire lives on. 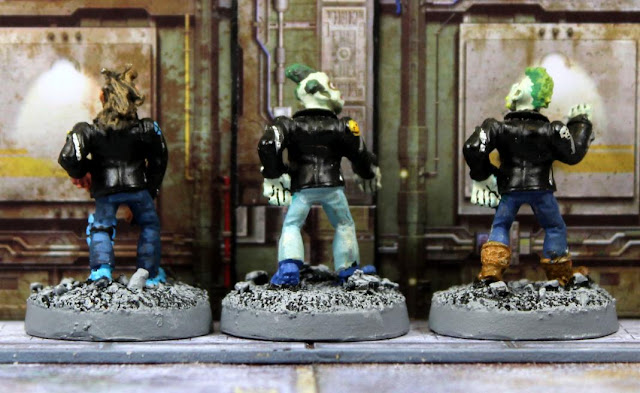 This trio are all best friends and are all Juves (a term used to denote children and teenagers). At the far left is Ainsley Goit. He has huge buck-teeth and boils on his face and a mullet hair-do. In the centre is Jimi Gimboid. He has cadaverous green skin, dark rings around his eyes and a long protruding incisor tooth. His hair has been cut into three clumps. The leader of this small gang is Jools Smeghead, who has also opted for cadaverous green skin from the Ugly Clinic. In addition, his face sports pus-filled zits, he has a nose ring and a bright green Mohican haircut. None of them are particularly bright and although all have records for minor crimes, they are extremely small-time perps, barely worth bothering with. However, they will be appearing a lot in my campaign - mainly as bystanders, simply because they amuse me so much. By the way, Goit, Gimboid and Smeghead were all terms of mild abuse from the TV series, Red Dwarf, as I'm sure most of you knew.
When I play my campaign I want to populate my games with lots of innocent bystanders. Mega City One is huge and is filled with people despite numerous major disasters in its recent past. I do not want my games to be just about Judges verses Perps. Civilians have a habit of being in the wrong place at the wrong time and can pose a nuisance and distraction to either side of the Law. This is the kind of chaos and unpredictability I want to bring to my games. The Blood on the Streets supplement has a set of optional rules for creating random events in a game. I will definitely be using them in my own games and will most likely add some of my own.
Posted by Vampifan at 09:41