In my last post I reviewed the chimps from a Mega City One ape gang. In this post I'll be showcasing the other two sentient simian types - gorillas and orang-utans. Physically the most powerful form of ape, gorillas take on a variety of roles, from leaders and lieutenants to grunt muscle. Either way, they form the backbone of an ape gang. Both agile and intelligent, orang-utans are sometimes leaders of ape gangs, but usually give way to larger and more powerful gorillas. More commonly, they take the role of specialists, such as stealthy burglars or snipers.

The three gorillas to the left were originally produced by Mongoose Publishing as part of an ape gang for the Gangs of Mega City One skirmish game. Later, Warlord Games sold them as part of their Judge Dredd Miniatures Game and added an orang-utan leader to the set (see below). At the far left is Cilla the Gorilla. She is armed with a Double-Barrelled Stump Gun Rifle. She has a bandoleer of Stump Gun shells strung across her back and chest. It is nice to see the sculptor adding a female to the range.
Standing next to her is Gus Grunt, who is aptly named. He rarely speaks and mostly grunts instead. Appropriately enough, he works as a lowly grunt enforcer. He is armed with a tyre iron, which is classed as a Club.

Second from the right is Brutus. He is every bit as brutal as his name suggests and is a gang leader of the Brutes ape gang. He is armed with a Spit Gun Machine Pistol and he wears Leather Armour. As with all of my apes, I have yet to work out his stats for use in my JDMG campaign.
At the far right is John Grillinger, who is a Gorilla Gangster and a Level:2 Infantry Hero. He is armed with a Spit Gun Rifle that has been designed to look like the old-style Thompson Sub-Machine Gun aka the "Tommy Gun" or "Chicago Piano." Having worked his way up through the ranks of an ape gang, the Gorilla Gangster has gone freelance and now hires his considerable skills and muscle to the highest bidder. Gorilla Gangsters are mercenaries who automatically have the following three Talents - Agile (may re-roll any non-combat Agility check), Light Foot (during a Move action, he can make an Agility check to jump over any obstacle up to 1" high without any Move penalty) and Dirty Fighting (if he hits an enemy in melee combat he does no damage. Instead, the target must make a Will check or else be Stunned). He was produced by Warlord Games. I can't help help thinking that he'd have made a great addition to Don Uggie Apelino's gang.

At the far left of my trio of orang-utans is Crazy Clyde. He pretends to be non-intelligent, which is why he isn't wearing any clothes, but he's actually a very sneaky burglar. His figure is an old Ral Partha fantasy were-ape. I decided I could just as easily use him in my JDMG campaign.
I should mention that all apes in JDMG (that's chimps, gorillas and orang-utans) have a special ability called Swinging Apes. This allows them to scale sheer surfaces or swing across wide gaps with ease. Any ape can treat any sheer surface as clear terrain, as long as it begins and ends its phase on a flat surface, and can move across any open gap up to its Move value without making an Agility check. 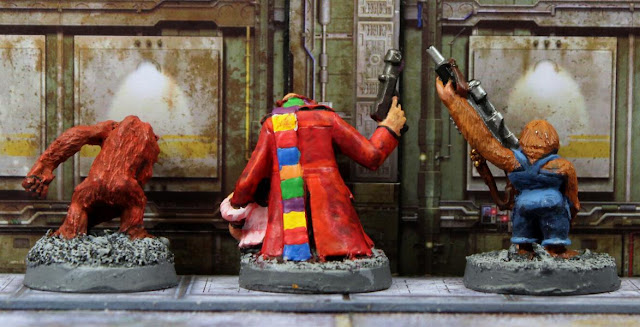 In the centre is the orang-utan leader that Warlord Games added to the ape gang boxed set of figures. I have named him Doctor Zechariah. He is armed with a Handgun Pistol. He is protecting a very young female chimp, which just begs the question, what's the story there? I have seen some folk commenting on how much he looks like Tom Baker as the fourth Doctor Who. Well, not with the face but certainly with the long red coat and huge multi-coloured scarf. That was one of the reasons I decided to make him a doctor.
Finally, is Li'l Louie, an orang-utan sniper. He was another figure originally produced by Mongoose Publishing as part of their GOMC1 boxed set of ape gang figures and then later sold by Warlord Games. He is armed with a Long Rifle with Scope Sight. Note the banana sticking out of the front pouch of his dungarees.
This is not the end of my reviews of my ape gangs. I still have to show you my ape gang bikers, none of which have been made or painted but I hope to rectify that soon. I am also seriously thinking of getting a load of Eureka apes, as they produce a large range of simian types and they'd be quite at home in Mega City One.

Seeing as this will be my last post before Christmas day, I'd just like to take this opportunity to wish all of my followers, their families and friends all the best on what I hope will be a joyous occasion for you all. Merry Christmas!
Posted by Vampifan at 09:55